How Deer Survive the Winter  By Gary Howey 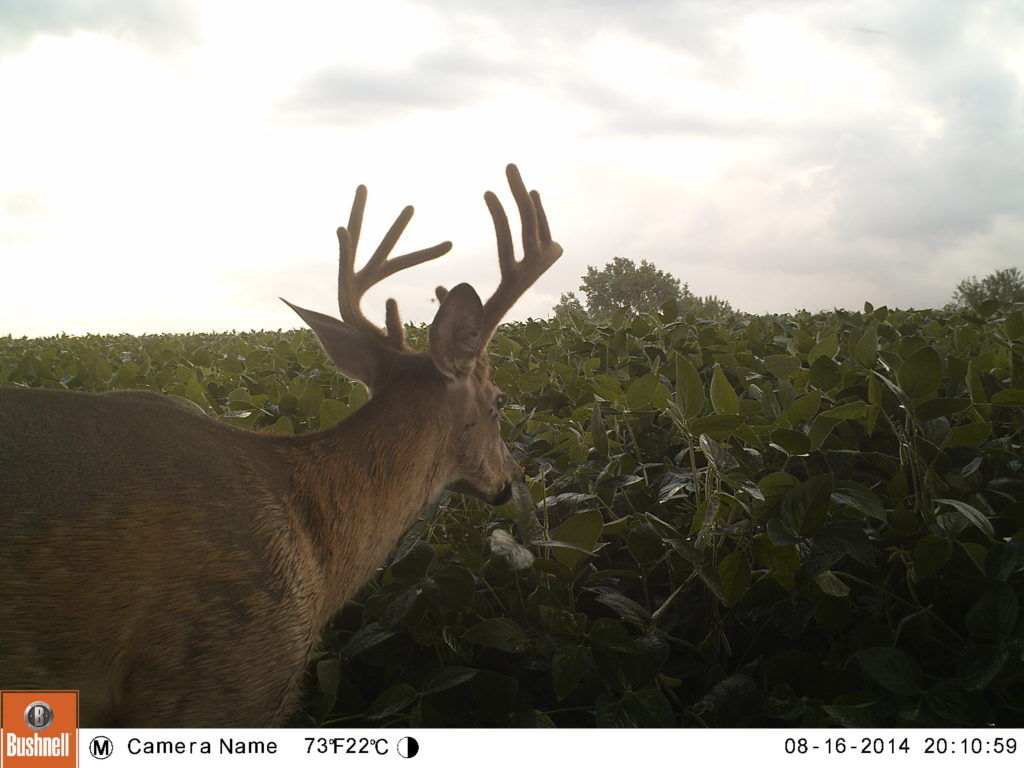 Once winter is over, in April as crops start to develop, velvet racked bucks will spend time in the new soybean and corn fields taking advantage of the new green growth on them. (Jeff Brown Photo)

White-tailed deer are found throughout most of the United States and as far south as South America and north into southern Canada.

Because they call home such a large area, they need to adapt, allowing them to survive the harsh winter weather of the upper Midwest and Canada.

Cold windy winters are hard on all species of wildlife especially deer, as the bucks have just come through the rut, where they’re in their poorest shape as they’ve been pursuing does, battling with other bucks and the only thing on their mind is to find and breed as many does as possible.

During the rut, they even stop eating, studies indicating their eating habits during the rut can be reduced up to 90 percent.

In the fall their body begins to change as they start to lose their shorter summer coat, with their winter coat appears, it has longer and darker hair, guard hair as well as a thicker undercoat that absorbs the heat of the sun, where it traps more body heat, which proves protection from the cold, they have oil glands in their skin, which makes their coat water repellent.

They also display a weight response, where deer will start converting food to fat in preparation for winter, no matter what food they have available.

Once the bucks make it through this period, they need to replace what they lost during the rut, with the bucks heading into winter, the toughest time on the deer and into the leanest time of year.

They endure the cold and snow throughout the winter, every hour of every day just to survive the harsh winter temperatures.

Deer like cattle are ruminants, cud chewing animals with a four chambered stomach where they can bring in a lot of food in at one time, digesting it later, they chew these hard to digest foods, swallow them and later bring them back up to chew later, breaking them down even more.

They also change their behavior to survive the winter, are a lot less active, with their movement about as half, saving energy where they need to eat less.

They hunker down during the harsh weather, staying put for days, not even getting up to go eat, relying on their stored fats.

Another change in the deer is their body also starts to convert what they’ve eaten to fat to help them make it through the winter.

Studies have indicated that during the warmer months that deer need about six to ten pounds of food each day but as the temperatures drop, they won’t move as much and won’t need as much to eat, with three to six pounds needed during the day in the winter months.

This is the time of the year when the brassica, radishes, turnups, rape & kale food plots that were planted become beneficial to deer as they stay green much longer than other plants, where deer will consume the green first and once a freeze occurs, when the sugar has moved to the root, deer will dig up and eat the root bulb, giving them nourishment through much of the winter.

Like most wildlife, during the winter, deer look for sheltered areas where they are able to rest and eat,

in the upper Midwest it’s conifers, cedar and pine trees, as well as in heavily wooded shelterbelts, which provide them some protection from the winter winds, while blocking the snow, where they’ll rest and finish their meals.

It doesn’t take long for the deer to use up most of their fat reserve and as winter goes into the first of the year where deer in the northern most states once their local food source is gone, will move, traveling to areas with better mast crops, twigs, stems and good winter cover, where they’ll herd up, gathering in large numbers, where they bed close to each other, allowing them to retain body heat.

Because of the number of deer traveling through this area, they create numerous trails, paths crushed down in the snow helping them to easily move to and from this area.

As winter heads into spring, as the snow melts down, it’s easier for deer to find food, making their lives a bit easier and as March and April show up, bucks will start to develop their new velvet covered racks and in late April on through June, does will have their new fawns.

Once again most of the deer have survived the last winter and as the ground warms, new vegetation will appear giving the deer the much-needed nutrition that was unavailable in the winter.

Gary Howey is an award-winning writer, producer, and broadcaster and inducted into the “National Freshwater Fishing Hall of Fame” in 2017. He developed and was the Producer- Host of the Outdoorsmen Adventures television series for 23 years and is the Host of the award-winning Outdoor Adventures radio program carried on Classic Hits 106.3, ESPN Sports Radio 1570 in Southeastern South Dakota, KWYR Country 93 AM and Magic 93 FM in Central South Dakota, As well as on KCHE 92.1 FM in Northwest Iowa.  If you’re looking for more outdoor information, check out garyhoweysoutdoors.com, and outdoorsmenadventures.com, with more information on these pages, Gary Howey’s Facebook page, Outdoor Adventure radio and Team Outdoorsmen Productions Facebook page. The Outdoor Adventures television show is available on the MIDCO Sports Network and News Channel Nebraska.