Where we call home, Nebraska & South Dakota, where patriotism is important to us with agriculture leading the way, it is not uncommon to see John Deere and Case IH farming equipment working the fields and traveling down our roads.

While the northeast, in the New England states, it is their beautiful fall foliage and of course Maple syrup.

The main ingredient in Maple syrup is the sap of all varieties of Maple trees, trees I and other kids climbed on and made forts in, as I did in Watertown, S.D., The sugar, black, red, the silver maple and the box elder, which is a Maple tree.

In order to extract the sap, the trees need to be tapped and the sap needs to be boiled down, removing the water, which  can be a time consuming process, but the end-results are worth it, yielding one of Mother Nature’s sweetest gifts, Maple syrup.

The origin of making Maple syrup goes back in history a long ways with the American Indians the first to make the syrup; they eventually passed their knowledge onto the European immigrants who sailed to America, with Maple syrup made each spring since that time.

Several years ago, I was asked if I though filming one of our Outdoorsmen Adventures television shows on making Maple syrup might be of interest to our viewers. The individual had been making syrup for several years, is one of the few tree tappers in my area.

Unfortunately, last year before we had an opportunity to get together, we had both gotten busy and he had finished with the process.

Then, just last week, good friend and Team Outdoorsmen Adventures member Bill Christensen, Hartington, Nebraska  mentioned he was going out to check the Maple trees he tapped this year, as the season was coming to an end  with the sap flow decreasing.

Earlier in February, he tapped sixteen Maples, putting out collection buckets and since then had collected a large quantity of the sap from the trees.

They say that any Maple will work when gathering sap to make Maple Syrup, including Silver, Sugar, Red as well as the Box Elder Maple. 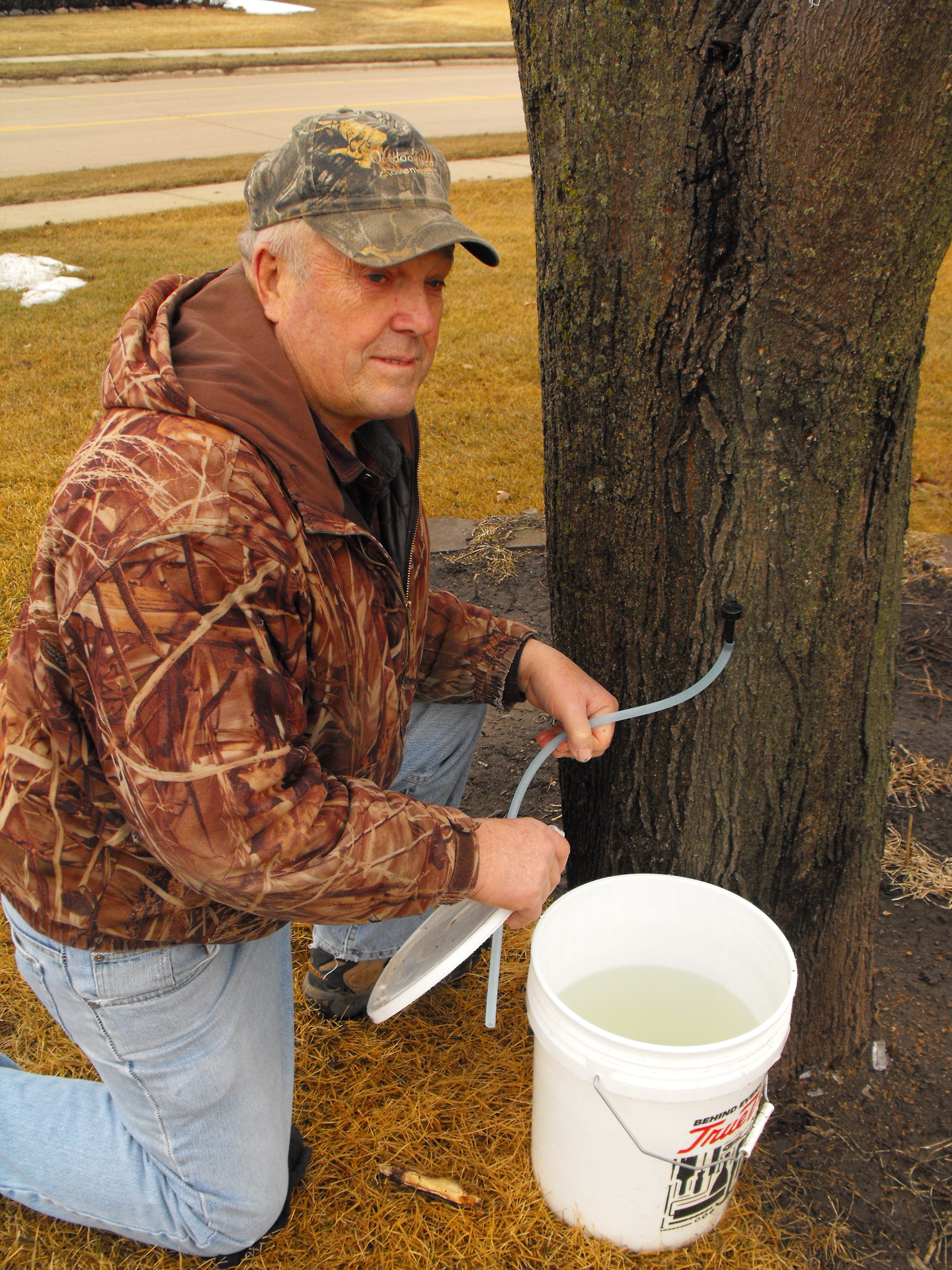 Bill Christensen, Hartington, NE. a local tapper inspects one of the sixteen Maple trees he tapped in order to make this year’s batch of Maple Syrup. (Gary Howey Photo)

Bill informed me that with the evening temperatures above freezing it was about the tail end of the collection period as the sap flows best with freezing nights followed by warm sunny days.

If the conditions are right, generally, the tapping and collection season runs about six to eight weeks.

With the flow slowing down and the long and tedious part of making the syrup beginning, the boiling down of sap these begins.

For those of you who do not know me, I can honestly say that I am always up for new experiences, as the thrill of exploration is in the Howey DNA.

I cannot say I invited myself along, but I jumped at the opportunity asking if he mind if I tagged along to check a few buckets and stop by their well shop to see the boiling process, to understand just how this operation worked.

The first tree he checked was just a few blocks from our offices, a smaller silver Maple, an ideal tree suitable for tapping, which would be a tree no smaller than 11 inches in diameter which some say could be up to forty-year old tree.

At the beginning of the season, Bill had tapped sixteen trees, some with multiple taps in the boles, the large part of the tree coming up from the trunk, as Bill had several trees with three or more taps into different boles of the same tree.

To tap a tree, he drilled a quarter inch hole into each of the boles, inserted a quarter inch nipple, with a clear plastic hose, which allowed the sap to flow down into a five gallon covered collection bucket, having the buckets covered cuts down on the filtering process, keeping bark, bugs and other unwanted debris from contaminating the fluid.

As I watched, Bill pried off the lid, revealing the clear liquid held within, explaining that even these smaller trees will produce a good amount of sap, requiring that the buckets emptied at least every other day.

Before the weather warms, when the ground, the sap in the trees and everything else is froze not much is happening within the trees.

However, as the weather warms, trees quickly thaw and the sap begins to flow.  As the weather becomes consistent, with daytime temperatures in the high thirties and forties, the sap flows, collected and then the boiling process begins.

Because Maple sap contains huge quantities of water, it is boiled in order to get to the pure syrup.

Tappers share information, passing along tips and other information as well as helping collect and if needed, furnishing sap to other tappers and another tapper told Bill, when the evening temperatures were below freezing when ice forms inside the collection buckets, since it is frozen excess water, discard it, cutting down on some of the boiling time.

As the tress stop producing and the final sap is collected, Bill removes the taps, seals the hole with a wood plug from one of the trees discarded branches, causing no harm to the tree.

Then the sap goes into large kettles, heated up to 260 degrees, a rolling boil, allowing excess water to boil away.

This can be a time consuming part of the process, as to boil the water out of forty gallons of sap takes approximately fourteen hours, while the entire process, takes around ninety-six hours.

Watching the water boil out is not the most exciting part of making Maple Syrup, as Bill puts it, similar to “watching paint dry” or “grass grow”, but the important part of the process.

If there is a critical part to boiling down the sap, it is when the greater part of the water boils out, as tappers need to keep an eye on the process as when the syrup starts to appear on the bottom of the kettle and boiled too long the syrup will caramelize, which is not good.

According to Christensen and other tappers, it takes approximately forty parts Maple sap to make one part syrup, in other words about forty gallons of sap to make one gallon of this sweet treat.

After visiting with Bill land watching this process, there was some reward for my wife and I as I had the opportunity to taste a spoonful of this sweet elixir and take a bottle home to try.

It was sweet and a bit thicker than those we purchased from the stores, as it is pure syrup with nothing added.

It may be over for this season, but it rolls around each year, does not cost an arm and a leg to get into.  If you have the time and into reaping, what Mother Nature has to offer, it is something you can do before you go out searching for morel mushrooms, or wild asparagus and for me there is nothing better than getting out and gathering what Mother Nature has provided.

Moreover, it is “sweet” when you can tap a few trees and end up with one of the finest offerings from Mother Nature’s garden, Maple Syrup!