If you are in the process of planning a hunting trip, the first question you may ask yourself is where do I start my hunt?

Even if you have hunted in the same area for years, things will change from one year to the next. The cropping system may have changed, high water may have altered the terrain, the ownership of the land changed or disease could have eliminated a better part of the wildlife.

So, each year, prior to the season, I like to put myself one up on the game, no matter what I am after, I need to do some sort of scouting, to spend a little time in the field before the season..

You do not have to be a rocket scientist to scout an area and figure out what the game is doing.

One excellent way to see where the deer, turkey and other game are located is to use your eyes; scouting with your binoculars as it allows the hunter to check out the area without spooking any game.

This can be accomplished no matter what species you are after, as all wildlife needs to feed and if you can locate their food source, you can be there before they leave their bedding area or roost.

If it is waterfowl you are after, you will need to look for them in the field just before it gets dark as chances are unless they have cleaned out the field or been pressured hard by hunters, they will be back around sunup.

All waterfowl have a tendency to feed in the early morning and later in the afternoon unless the weather is extremely warm.

When it is warm, geese do not need much feed as they do when it is cold, so they may feed only once during the day.

Scouting for spring turkey is done in much the same fashion except the terrain the turkeys live in is a lot rougher.

In the spring, I try to make the most use of my time in the field, trying to accomplish several things with each trip.

I am not just looking for turkey sign, but I am also on the lookout for last year’s deer sheds.

Late winter, just before spring arrives is a perfect time to scout for turkeys as they bunched up, as all wildlife will bunch up into large flocks or herds when it is cold, close to their food source.

A flock of turkeys leaves lot of sign, so locating areas that turkeys are using in late winter and early spring is simple!

Turkeys are scratchers, so they turn over leaves, manure and sticks always looking for a tender shoot, small insect or waste corn to eat. By looking over their scratching, you should be able to tell in which direction they moved. 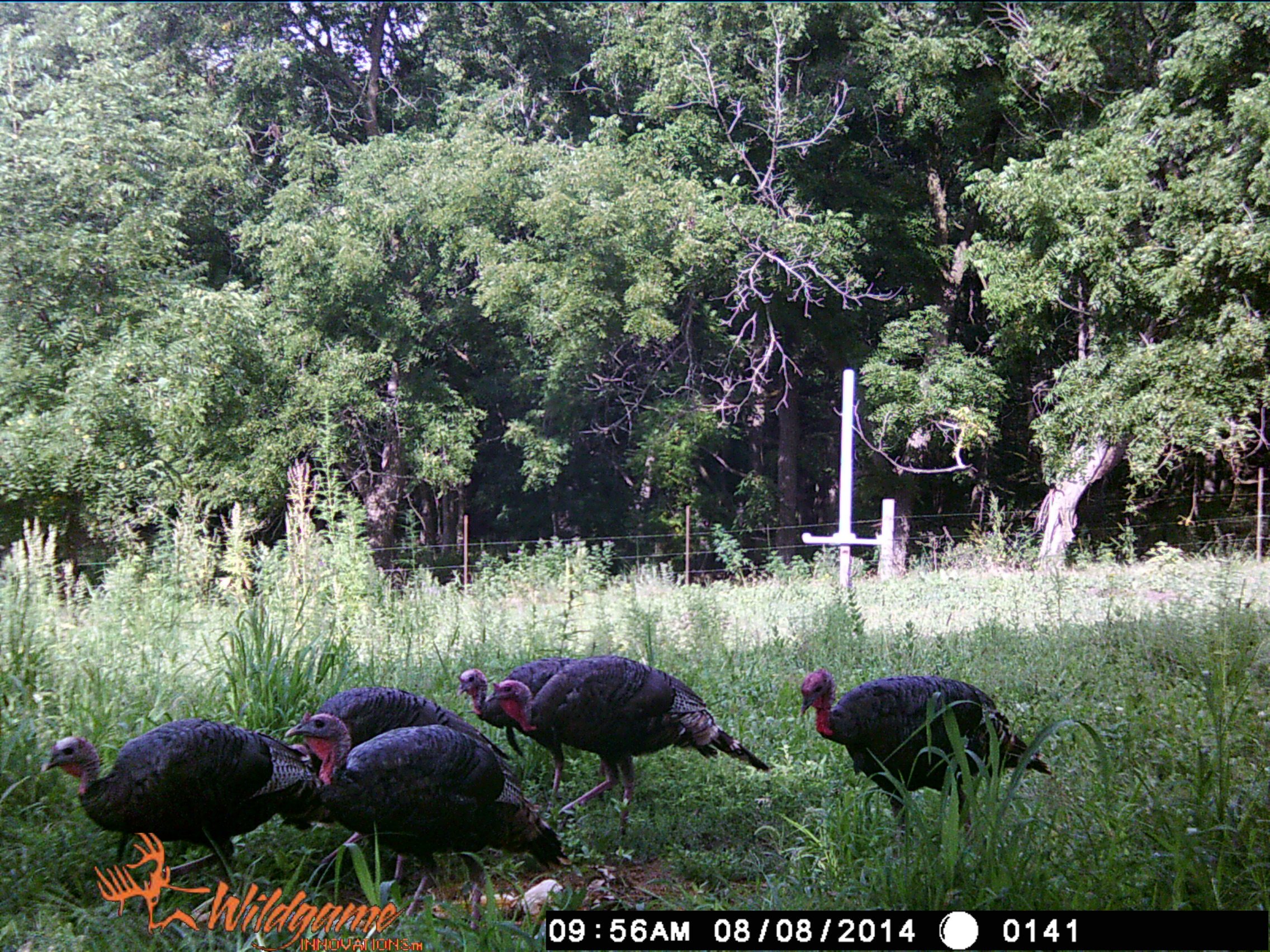 Pre-Season scouting, the use of game cameras, your optics-binoculars and spotting scopes and before site visits made prior to the seasons, allows hunters to gather important information on the wildlife in the area. (Cody Thoene game camera photo)

They also leave a bunch of droppings as they work their way through the woods.  Discarded feathers are another good indicator that the birds have been around because they lose feathers as they cross under fences and brush against all those nasty thorny bushes out there.

When I first go into the woods to look for turkeys, I carry along a call. “NO” not turkey calls as some do, I do not want the turkey coming to me, I just want to know if there is a gobbler or two in the area.

I like to use a crow, predator or even a hawk call, as toms shock gobble pretty readily when startled and if I can get them to gobble with out them looking for me, I know where they are and that gives me all of the information I need.!

Using these calls really works well as the sun goes down just when the birds are going into the roost as you can locate their exact location for the following morning hunt.

Remember, no matter what call your using; always remember that a Tom could be just below you or on the other side of the tree, so try to conceal yourself!

Turkey’s eyes are phenomenal and if a Tom happens to be in the area, he will spot you in a mila-second if you are not hunkered down or hidden behind something when you call.

When you’re pre-season scouting and get a response, get out of the area because you know everything your going to know and will now have a starting point come opening day.

Earlier I mentioned shed hunting in the spring, which is great way to scout for deer.

If I find a good shed, it is a good indicator that the buck made it through last year.

Once you have found his shed, there is a good chance he will be in the area next season. Bucks will shed their headgear every year after the rutting season during the first couple of months of the year as they start to develop their new rack.

This not only gives me the heads up for next season, it is also a neat way to decorate my office.

If you are going to hunt for sheds, it is best to do it early in the year, because you are not the only one looking for sheds! Field mice, raccoons and about every other critter in the woods is also looking for them because they supply needed nutrients for these animals.

Think of these shed antlers as small critter mineral licks because these animals will chew on the sheds until there is nothing left.

A couple of places that I had really good luck finding sheds include areas where the deer trails cross the fence, around hay bales where the deer have fed during the winter and in areas along the trail where the buck has to jump over a log or ravine.

The jolt when they hit the ground many times will knock the shed loose and it is not uncommon to find several fairly close to these areas.

You will find sheds on and around the hay bales because they lose them when the buck is rooting around in the hay bail while having a meal.

No matter what you are hunting for, pre-season scouting can tell you a lot and help you to set up in the right place when the next hunting season comes along!