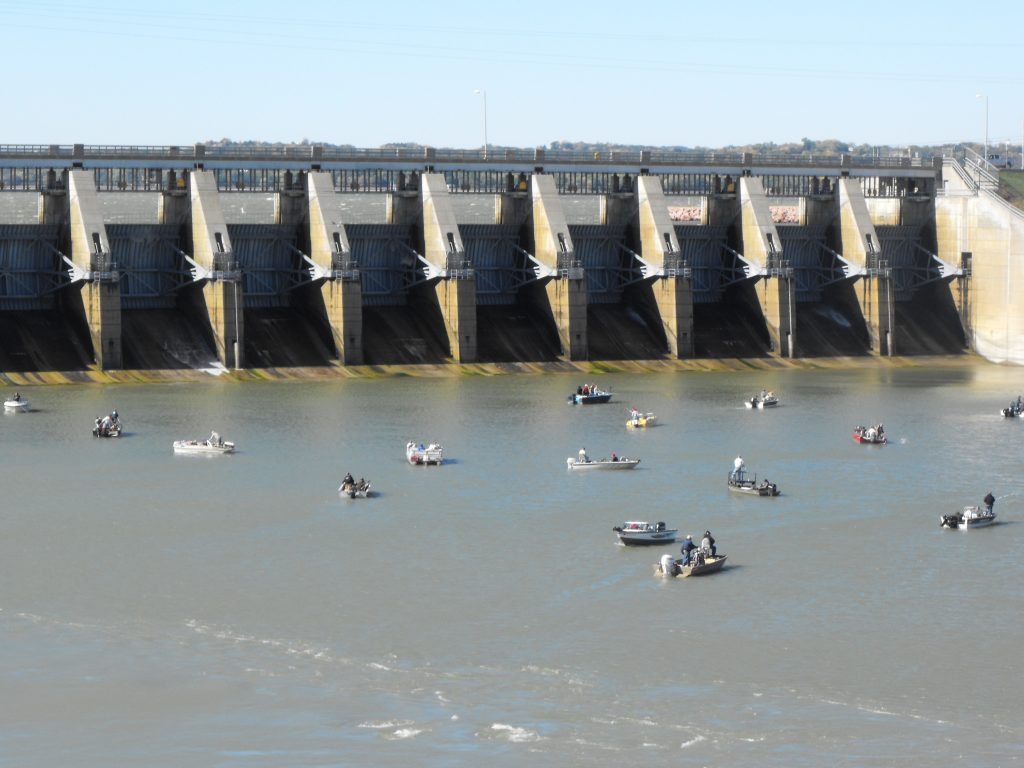 One of the migrations you’ll see is the boat migration where serious anglers start to stack up below the open waters of the Missouri River Dams, with others joining this migration as temperatures warm. (Outdoorsmen Productions Photo)

In the upper Midwest, we see quite a few migrations going through our states, they include, the spring waterfowl migration where thousands of ducks and geese make their way north to their breeding grounds.

This is also the time of the year; when the huge flocks of the noisy Snow geese migrate through.

Waterfowl hunters will have the opportunity to hunt Snow, Blue and Ross’ geese during the Spring Light Goose Conservation order, as their numbers have grown to a point that the tundra, their breeding and nesting grounds are being destroyed and no longer have the ability to support such huge populations.

That Conservation order spring Snow goose season opened at sunrise the third Monday of February, where hunters in this special season will have an opportunity to put a dent in the huge Snow goose population.

Rules for the Conservation order are much different than the regular waterfowl season as hunters are allowed to use electronic callers, hunt with unplugged shotguns, with no limit on the number of birds you can take in a day, or have in your possession.

Then again in as fall rolls around we have the fall waterfowl migration, where the waterfowl that went though our area in the spring will now, make their way back south, back into the warmer climate.

In late fall, the Snow Bird migration will pass through our states, where outdoorsmen and women in the northern regions, pack up and head south to get away from winter, enjoying the nicer weather down south.

And then there’s another migration occurring in Nebraska, Iowa, and South Dakota as well other states, indicating that spring is almost here and that’s the fishing boat migration heading for the river.

As soon as the temperatures get above freezing, the first boats heading out will be your serious anglers, as they launch their boats on the water below the dams, probing the depths of the Missouri river for walleye and sauger.

This migration will pick up with the number of boats increasing, as other anglers who waited for the warmer weather join those serious anglers.

What created this migration, started late last fall, the Walleye and Sauger migration, occurred when these fish started heading towards their staging areas in preparation for the spring spawning ritual.

The areas the fish stack up or stage in are the deeper holes below the spawning sights.  The same areas used every year by the fish, generally out of the main current and close to the sand and gravel areas the spawn in.

Their upstream migration was blocked by the dams along the Missouri River, concentrating the fish below the dam.

Smaller males seem to be the first to arrive and generally the more aggressive bitters, so they’ll make up the majority of your catch earlier in the year, on into spring.

During the late winter and early spring the fish become more active, during low light, searching for warmer water, moving shallow to feed as the sun begins to rise and prior to sun set.

You’ll still find a few fish that will bite throughout the day; with your best opportunity to set the hook on the better fish is when the light penetration warms the water.

Like the other migrations, the fishing will start picking up as temperatures rise, as the fish, which are cold blooded, become more active as the water warms.

The final spring migration will be the migration of the Spring Turkeys when their huge winter flocks split up and the birds split up, migrating into the smaller spring flocks, where the gobblers will strut, gobble and show their stuff, hoping to attract a number of hens into their harem.

Since the first of the year, other things have occurred in the outdoors, with those bucks that made it through last season, many of them are in their worst shape, trying to recover from the rut, the long winter and begin shedding their head gear.

The bucks are in the process of dropping or shedding their antlers, when you’ll see bucks with one antler or no antlers at all as the process of antler regeneration begins.

Antler growth begins in March through April and because of the lack of quality food, as vegetation hasn’t begun to grow, to green up, where in our states  the new spring growth doesn’t appear until mid to late April.

Their antler growth starts appearing in late March on through April, where the amount of daylight becomes a big factor.

In the early spring because of the lack of daylight hours, there isn’t much growth, and with the increase in daylight in June antler growth begins in earnest.

A deer’s antlers are the fastest growing bone material known to man, in just 120 days, beginning in late March through August; mature bucks can grow over 200 inches of bone on their heads.

These things are sure signs that spring is on the way and that Mother Nature best get ready for the warmth and the colors that come along with spring.

It’s my favorite time of the year, when I can get outside, enjoy the outdoors and shed the layers of heavy clothing that have encumbered me for so many months.

When it arrives, we’d best get out and enjoy it while we can, because it changes all too soon and things that we planned on doing this spring become things that need to be done in the summer or before fall turns to winter!

Gary Howey, Hartington, Neb is a former tournament angler, fishing & hunting guide, an award winning writer, producer, and broadcaster,  inducted into the “National Freshwater Fishing Hall of Fame” in 2017. He is the Co-Host of the Outdoorsmen Adventures television series and Outdoor Adventures radio. The new Outdoorsmen Adventures series airs April 4 at 11:00 am on KCAU-TV, Sioux City, as well as on numerous local stations.  If you are looking for more outdoor information, check out garyhoweysoutdoors.com, outdoorsmenadventures.com and like Gary Howey’s Facebook page and watch the shows on the MIDCO Sports Network, News Channel Nebraska and on the Outdoor Channels www.MyOutdoorTV.com

One of the migrations you’ll see is the boat migration where serious anglers start to stack up below the open waters of the Missouri River Dams, with others joining this migration as temperatures warm.

← Prev: As Hunters, We need to be more vocal, to educate! Next: When the Blue Sky turned White →