When the Blue Sky turned White 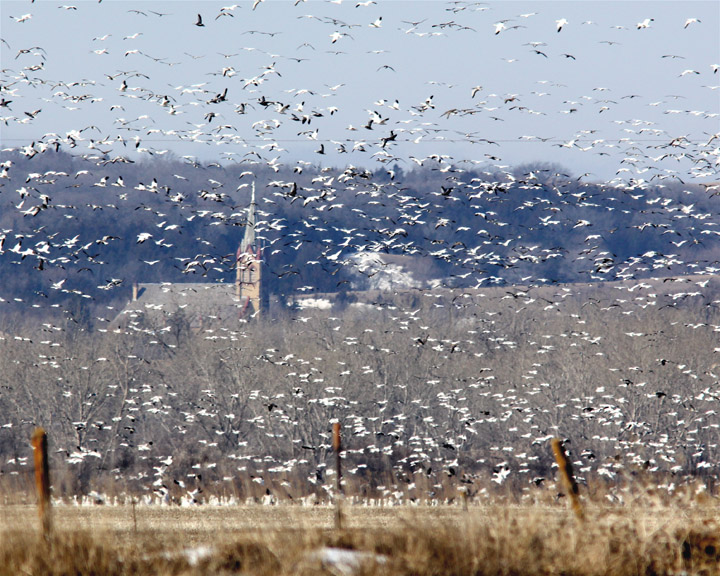 Snow goose numbers have exploded, where they are destroying their Tundra habitat and because of this, the Light Goose Conservation order was established, where now, during the spring season, electronic calls, unplugged shotguns along with no daily or possession limits on the white geese. This photo shows a white cloud of Snow geese coming up near St. Helena, NE. (Photo by Larry Myhre)

Off in the distance, the call of hundreds if not thousands of noisy Snow geese could be heard as they migrated through north eastern South Dakota, as they made their way north to their breeding grounds.

Team Outdoorsmen Productions member Larry Myhre, Sioux City, Iowa and I were filming  between Watertown and Aberdeen, South Dakota with Neu Outdoors, Yankton, South Dakota,  with the ground around our lay-down blinds covered up with hundreds of white wind socks and dozens of other decoys.

The electronic calls were at max volume, hoping to draw the birds in our direction and down out of the “stratosphere.”

Neu’s large decoy spread and the electronic callers caught the attention of a flock off to the west as they started to turn, coming in the direction of our decoy spread, another flock appeared in the south and soon the blue sky above us turned white with huge flocks of circling snows.

These geese are very vocal; with each bird calling continually, as they circled, their distinctive whock” and “kuowk calls filled the air.

Like most Snow geese, they’ll approach the decoys high, making several high passes, checking things out before committing and dropping in.

The first birds to head north are the breeders, the older more educated birds, when even the smallest of things not looking right in the decoy spread causes them to form back up and move on.

The later flights, made up of the young and older non breeding birds, aren’t in a hurry to get north and are generally easier to decoy.

Some of the birds above us swung once and then continued north, with hundreds of the noisy birds still working over us.

Then, a few of the geese would fold their wings, maple leafing down through the other birds circling our spread.

Once this occurred, other geese made their move, setting their wings as they started coming into the decoys.

John Neu, our guide waited until they were right in our face before calling “take em” with seven hunters popping up out of the blinds, as the close geese back peddled, attempting to put some distance between themselves and the hunters.

Myhre and I were on the north end, with unplugged shotguns, giving us five shots apiece, I zeroed in on the birds on the right side of the flock while Larry took those out in front of him.

Three birds folded on both my side and out in front of Larry, while the other hunters with extended magazines picked out birds in front, then working steadily from the right to left, dropping several birds that twirled earthward out of the flock.

It was raining geese in every direction; with John’s dog moving through the decoys, quickly retrieving the numerous white geese on the ground. 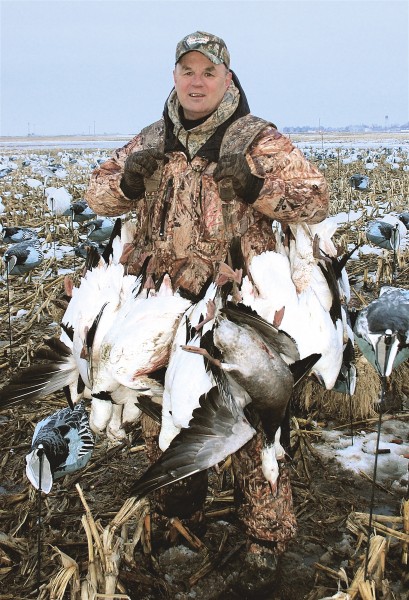 This hunt was during one of the first Light Goose Conservation orders, with this spring hunt allowing hunters’ to hunt Snows, Blues and Ross geese, removing the excess bird numbers, helping to slow down the rate of the tundra destruction created by this over population of light geese to  their breeding grounds in Greenland, Alaska and in Siberia.

This first federally mandated special Snow geese season opened in 1999, as their numbers skyrocketed, with the light geese being the most abundant waterfowl on the continent.

These birds reproduce quickly with each female laying three to five eggs, these eggs hatch in twenty-three to twenty-five days, then  shortly after hatching the young leave the nest beginning to feed, with the birds acquiring their flight feathers in only a month and a half, reaching maturity in just two years.

In recent studies, biologists estimated there were millions of White geese, including 15 million lesser snows, 1.5 million Ross’s and 1 million greater snows, which is too many to sustain the environment where they live.

As the snow goose population continues to grow, they’re destroying their own habitat, the tundra which is not only used by snow geese; it also affects other wildlife species.

Snow geese feed in flocks, like huge vacuums as they move through a field, not only eating the vegetation, but also digging up the roots and bulbs and because of the destruction of the tundra, snow geese now have moved into nearby agricultural land to feed.

Unlike the fall waterfowl seasons, many of the restrictions for this season were reduced, hunters are still required to use non toxic shot, to possess a state hunting permit, with some but not all states requiring a Federal Duck Stamp, during the spring season, unplugged shotguns and electronic calls can also be used and there’s no daily bag or possession limit.

Even though there a no limits on light geese during this season the Wanton Waste Law still applies, which means if you intentionally waste game, you can be ticketed, as the law reads; you must not needlessly waste the animal or otherwise intentionally allows it or an edible portion to be wantonly or needlessly wasted or fail to dispose it in a reasonable and sanitary manner.

These birds are smaller than most species of geese, with the lesser snow weighing four and a half to six pounds; the greater snow goose may weigh up to near ten pounds, with the smaller Ross goose tipping the scales at almost four ponds.

Hunting Snow geese requires the hunter to have both skill and knowledge with these skills honed during each and every spring season.

Snow geese adapt quickly, and because they spend over a half of the year migrating, with longevity, they become smarter each year.

Snow geese can live to be more than 15 years in the wild; with the oldest light goose taken on record, a lesser snow goose twenty-seven and a half years old.

Because snow geese fly in huge flock with hundreds of pair of eyes looking down on the hunters decoy spread, it doesn’t take much too alert light geese, causing them to lose interest in your decoys, drifting off and departing quickly.

The main management tool for Snow geese is hunting, where hunters remove a half-million birds per year.

Those that hunt the spring light goose season, because snow geese migrate in such huge flocks, depend on large numbers of decoys, with Dakota Decoy Snow and Blue wind socks being a major part of many decoy spread that not only look good, but also add a lot of movement to the spread.

Other decoys the guides and hunters we go out with also use Snow goose shells, Dakota Decoy full bodies and a number of other manufacturer’s Snow goose decoys.

Rules as to the different hunting areas in the state and when the seasons run can vary in each state as can some of the restrictions.

During the spring season, Nebraska is divided into zones, with all zones opening up on February 10 and then closing on different dates. The East zone closes April 15, 2020, while the Rainwater Basin and West zone both close the 5th of April, 2020.

To assure which zone you’d hunt in, you may want to go to http://outdoornebraska.gov/wp-content/uploads/formidable/5/LightGoose_2016.pdf.

In South Dakota, the Light Goose Conservation orders opens throughout the state February 17 running through May 15th, 2020.

These birds arrive in South Dakota, late February on through early March and move primarily through the eastern one-third of the state.

Some hunters who enjoy eating dark meat,  have different ways and recipes to prepare them, including snow goose jerky, snow goose kabobs or soaking the breast in milk or marinating them in teriyaki or any other favorite marinade before breading and frying.

Even if you’re not a hunter, just the sight and sound of the huge flocks of migrating snow geese is breathtaking and one you’ll remember for years to come.

Gary Howey, a Watertown native now residing in Hartington, Neb. is a former tournament angler, fishing & hunting guide,  an award winning writer, producer, photographer and broadcaster, a recent inductee into the “National Freshwater Fishing Hall of Fame” in 2017.  Howey is also the Producer-Co-Host of the Outdoorsmen Adventures television series and Outdoor Adventures radio. If you are looking for more outdoor information, check out garyhoweysoutdoors.com, outdoorsmenadventures.com and like Gary Howey’s Facebook or watch the shows on the MIDCO Sports Network  and on the Outdoor Channels www.MyOutdoorTV.com

← Prev: The "Migrations" Next: Strutting Gobblers, It's the Spring Season →