Those Dog Days Of Summer By Gary Howey

Not long ago, late winter we wished it would warm up, well, it is happening now with those wishes coming true.

It is the time of the year, when the temperatures rise, along with the humidity, perfect conditions for some nasty weather and tougher walleye fishing conditions.

There are numerous adjustments fish have to relate to during the Dog Days of Summer season including: rising water temperatures, rising or falling barometric pressure, high water, low water and the bright summer sunlight all making walleye fishing during this time of the year tougher.

This is generally when the deeper water areas with less sunlight penetration are where you will find many fish.

Because of the heavy rain, we have had and the fluctuations in temperatures, things may be different this year, some of the walleyes and other species not in a big hurry to head for deeper water.

When fish go deep, there are several things you can use to get your bait down to the depth the fish are holding.

Try trolling using line counter reels spooled with Berkley Fireline and Off Shore snap weights or leadcore line, which allows anglers to get their crankbaits deep.

A fish’s movements can vary drastically; this is the time of the year, especially just prior to a severe weather change.

Fish can detect a weather change long before it occurs using their lateral line, a series of sensitive nerve endings extending from behind the gills along their side out to their tail.

Because they feel the weather, changes coming and cannot be are sure how long it may last, walleyes, other species of fish will go on a feeding binge prior to the storms arrival, and then as the weather change arrives move deep, lying dormant, tight on the bottom until weather conditions stabilize. 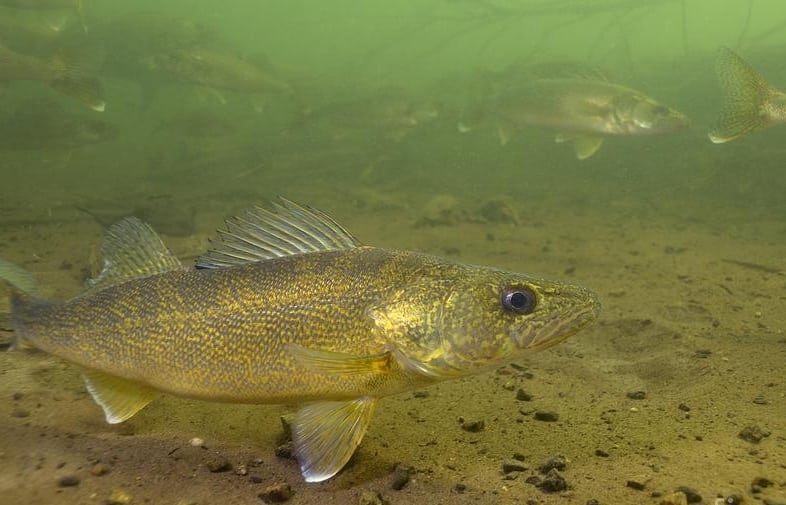 As the waves roll into a point or shoreline, a mud line is created allowing walleyes during the day to move up from the deep water, shallow to feed.

When the wind is blowing, the wave action ripples the surface, reducing the amount of sunlight’s penetration, making the shallow water areas more comfortable for the walleyes when this happens, they will move up out of deep water to feed during the day.

When heavy winds are pounding into a point or shoreline is another time walleyes will move shallow during the day. As the wind hammers against a shoreline, it pulls soil from the shoreline and takes it back out into the water, creating a mud line, which dramatically cuts the light penetration along the shore.

When you see the muddy water coming off the shore or point, it may seem hard to believe that even walleyes would be able to find bait in the muddy water.  Just because the top of the water is muddy, does not mean that it is muddy all the way to the bottom.

As a diver, I have swum under many of these mud lines; just to see how far down the mud line went.

In many cases, the water a foot or so below this mud line is cloudy or even clear allowing walleyes the opportunity to move up during bright sunny days and feed.

In the river, fish will also be in the deepest holes and if there is heavier, current may be in shallower areas as heavy current cools and oxygenates the water making it a more hospitable environment for walleyes.

During the heat of the summer in a river, an increase or decrease in water flow will cause fish to make sudden location changes that anglers can use to their advantage. When there is a increase in water flow, fish will move up stream, up against the sandbars and shallower to feed, taking advantage of the new influx of baitfish and other aquatic creatures that are being flushed into the system while a drop in water levels, forces the fish into the remaining deep holes, concentrating them in smaller areas..

Generally, the Dog Days of summer mean that anglers will have to go deep to find walleyes. However, your old walleye haunts those you fished in late spring and early summer will still hold some fish, because of the high dirty water conditions, the fish will spread out and may be located in areas that until this season were high and dry. When newly flooded areas appear, fish will start taking advantage of these new areas as they may allow the light sensitive walleyes to pursue the baitfish in these areas giving them the opportunity to feed in the low light conditions and feed much of the day.

Before you go, make sure you have a good supply of water so you can keep hydrated, sunscreen, a good hat and sunglasses as these items will help you make it through the day.

By taking advantage of the things mentioned above during the Dog Days of summer, if you do not mind the heat, or have a Bimini top on your boat for shade, fishing could be an all day event.

← Prev: Fish the Weeds and Wood For Bass By Gary Howey Next: Capture Better Hunting Photos with Your Phone →