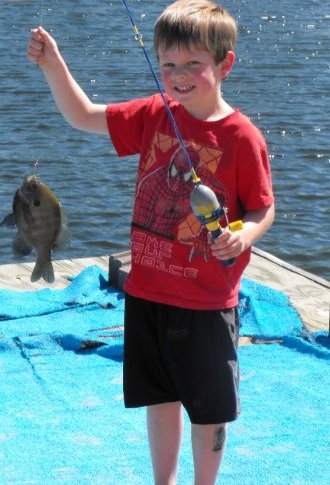 Kids love fishing for bluegill, Ted Slaba, Wagner, S.D. with a bluegill he caught from a small pond when he first started fishing with his grandfather author Gary Howey, Ted couldn’t be happier when he’s fishing for panfish such as the bluegill. (Gary Howey Photo)

On a recent trip to one of my favorite fishing holes, it was easy to see that the bluegill were getting ready to spawn as all along the shoreline, as I could see the small circular depressions, numerous panfish,  bluegill nests.

The bluegill is a member of the panfish family and is a native fish found in North America, depending on where you live, they’re also called “bream, brim, and sunny” and inhabit streams ponds and lakes.

There are several members of the bluegill family including the green sunfish, orange spotted sunfish and redear sunfish.

Pre-spawn begins when male bluegill, using their tale creates a small depression that becomes its nest.

Once the nest is built, the males work hard to attract a female into their area, and once the two get together, the spawn will begin.

Their spawning season generally begins in late May, with the appearance of the spawning beds and can continue on up to August.

Their spawning ritual begins with the female coming into the nesting area, with the male swimming in circles around the nest, as it does this, he’ll attract her by the grunting sounds he’s making.

Once the female decides on a mate, they settle into the nest, the fish touch bellies to spawn, at that point the male chases her off of the nest, “talk about a short relationship”, with the male standing guard over the eggs, for about five , when the fry appear and begin to swim.

Bluegills generally don’t get overly large; with ten inches being a big bluegill, as far as what they eat, they’ll eat anything they can fit in their mouth, generally feeding on small aquatic insects and fish.

There are several award programs in South Dakota and Nebraska for catching big bluegills.

In, South Dakota you can receive the award by catching a one pound bluegill or you can qualify for the Proud Angler “Catch & Release” award with a ten inch bluegill.

Nebraska has a similar program, their Master Angler award program, in order to qualify for this award; the weight and length are the same of those mentioned above in the South Dakota program.

Because bluegills have a small mouth, you’ll need to use small 1/32 or 1/8 ounce tackle along with a rod and reel that allows you to cast this light tackle. .

Catching bluegill works well, when they’re in the shallows, which can be done, using standard tackle with a small plastic aquatic bait, livebait as well as fly fishing equipment

When the fish are on their beds, a small plastic worm or other small artificial aquatic insect worked slowly into and through the bed will attract the fish, which will remove it and once the fish has taken a hold of it, set the hook.

It’s a good idea to release those fish taken from the bed as once the male is removed, it doesn’t take long for smaller fish to come in and clean out the nest.

Bluegills like to use the shoreline weeds for cover and fishing a small 1/32 ounce Beetle Spin or light 1/32 or 1/8th ounce jig worked along the edge of the weed beds accounts for a lot of bluegill.

As the water warms, bluegill will move into deeper water, a slip bobber rig is a great way to fish for bluegill when they’re deep.

Slip bobber rigs consist of a slip knot that allows the angler to adjust the depth he wants to fish, a small slip bobber, a small split shot and small jig or a size eight or fourteen  hook.

You’ll want to go with just enough weight so the slip bobber floats low in the water, allowing the bluegill to take the bait, and feel very little resistance. You can bait the rig with a small piece of worm, wax worm, grasshopper or small plastic artificial bait.

My fishing partner, Larry Myhre not only uses fly fishing gear to fish for bluegills, he also makes custom fly rods and ties his own flies.

According to Myhre, “most any wet flies or nymphs in size eight or ten would work well.

Bluegills seem partial to black and yellow colors, although color is not critical.

Small poppers in hook size ten or twelve works well, especially early and late in the day, with a variety of sponge spiders, crickets or grasshoppers working well.

Because bluegills have such a small mouth, when fishing for them, you should have forceps or needle nose pliers to remove the hook”.

Bluegills are an excellent fish to start kids out with, as they inhabit almost every body of water, are eager biters and when you catch one big enough to keep, make a great tasting meal.