Topwaters put the excitement in summer angling By Larry Myhre

SIOUX CITY | If there is a more exciting way to catch either largemouth or smallmouth bass than on topwater baits, I have yet to find it.
The first time a big largemouth “blew up” on my black Hula Popper, I was hooked, even more solidly than the bass.
It’s no mystery that the best time to fish topwater is in low light conditions, such as that hour or two after dawn and just before sunset. Bright, sunny conditions are not good, but you never know. Never hurts to try. Dark, cloudy days may provide a topwater bite all day long.
Wind, of which we get plenty here on the Great Plains, is your No. 1 enemy. Waves just generally screw up anything you try to do with topwater. Waves will inhibit your lure action and create a big bow in your line. Not good. When it comes to topwater, you need to stay in touch with your lure.
There are, however, places where the only lure you can throw is a topwater. It’s what most bass anglers call “the slop.” That’s when weeds and moss are so thick only a weedless topwater lure will work.
There are a number of lures that work well in the slop. Frogs, for instance. There are a bunch of them being made by a variety of manufacturers. A few would include the Moss Boss, the Super Frog and the Scum Frog. All are hollow plastic lures with upturned double hooks snuggled into the back of the frog, making them weedless.
Another choice would be any of the long, fat plastic trailers such as Berkley’s Havoc Craw Fatty. Fish any of them behind a pegged, cone sinker (half-ounce or better) at the hook eye of a Texas-rigged Craw Fatty or similar bait and you are in business.
Years ago, I fished what I called a dry line method using a jumbo pork frog and big weedless hook. The Jumbo Pork Frog offered by Uncle Josh Pork Baits is 3.25 inches long and heavy enough to cast easily. Fish it by keeping your line off the water and skittering it back across the weeds as slowly as possible. Let it drop into the pockets and then slide it out.
Actually, that is how you should fish all of the above baits. Rods of at least 7 feet in length and heavy action are important tools that will enable you to keep as much of your line out of the water as possible. When you do hook a fish, it is imperative that you keep its head up and out of the weeds and “water ski” it to the boat. Only a long, heavy rod will enable you to do that.
Braided lines on slower retrieve reels work best. High speed reels just don’t have the power to winch big bass out of the slop. Thirty-pound braid such as Power Pro works well for much of our fishing. It’s small diameter, about the same as 8-pound-test mono, and will cut through the weeds. If you want, you could go as high as 50-pound test.
Once you leave the slop, you can switch to other baits. But remember, bass are ambush feeders, so for the most part you will be casting to, alongside or behind cover such as docks, downed timber or large rocks.
This is where “walking the dog” may be the best approach of all. Walking baits look a lot like cigars with hooks. One of the best is the Zara Spook.
With these baits, it is all about the retrieve and rhythm. If you ain’t got rhythm, you may want to go to a popper. 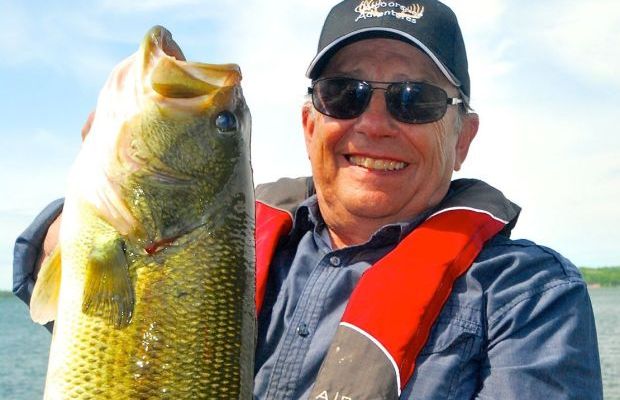 Make a cast, drop your rod tip almost to the surface of the water. Reel in the slack as you raise the rod tip and pull it down. This will cause the lure to kick one way or the other. Let’s say to the right. Again, raise the rod tip, reel in the slack and twitch it down again. This will cause the lure to kick to the left. Then develop a cadence, and bring the lure to you. You can “walk to the dog” slowly or quickly. Your choice. Active fish might mean a quicker retrieve, for instance.
You will miss a lot of fish with walking baits. Here’s why: Bass often follow these baits, and just before striking they will raise their head out of the water and open their mouth as they swim up to the lure. The sight of a bass doing this will cause a “set the hook” reaction in most anglers. So expect it, and resist the impulse to jerk. Wait for the bass to grab the lure and turn. That turn is when you should set the hook.
Prop baits are among my favorite topwaters. They look like a cigar with hooks with a propeller blade at the front or rear or both. Heddon’s Tiny Torpedo is a well-known and effective prop bait. So, too, is Rapala’s X-Rap Prop.
Fish these baits by throwing them near cover. Let the ripples die away and then give it a twitch, causing the prop to spin and throw water. Let the ripples die away and repeat. You can almost fish this lure in place, but eventually you will move too far from the cover, so just reel it in and make the next cast.
Poppers are another good lure to tease bass out from under cover. My favorite is the old standby Hula Popper, but there are many other good ones. Rebel’s Pop-R comes to mind.
Fish these by casting near cover. Let the ripples die, then twitch, causing the lure to make a “popping” sound in the water. The harder you jerk, the louder the “pop.” I find it best to twitch the lure just hard enough to make it “pop,” but if you’re fishing real dirty water, call the bass in with a louder “pop.”
When fishing topwaters, the length of your cast is important. I like to be close to my work. Short casts into or alongside or past cover is what I like to make. But you can’t always do that. Water color will determine the length of your cast. Clear water will require you to make long casts to avoid spooking the bass with your boat. The dirtier the water, the closer you can get, up to a point.
Casting accuracy is vital. You want that lure to go where you want it to go. The size and weight of your lures should be matched to the length of your cast. Heavier lures will be more accurate for long casts, lighter lures will suffice for short casts.
Largemouth and particularly smallmouth bass are very plentiful in nearly all of the lakes in the tri-state region. And surprisingly they are mostly overlooked by anglers focused on walleyes. Summertime is a great time to fish topwaters. Try it. I’m betting you’ll hook more than just a bass. This technique has a way of hooking you.

← Prev: If you want to catch fish It has to be Fresh By Gary Howey Next: The Artwork of Terry Redlin A Step Back in Time by Gary Howey →