Trapping, what Happened to the Fur Market   By Gary Howey 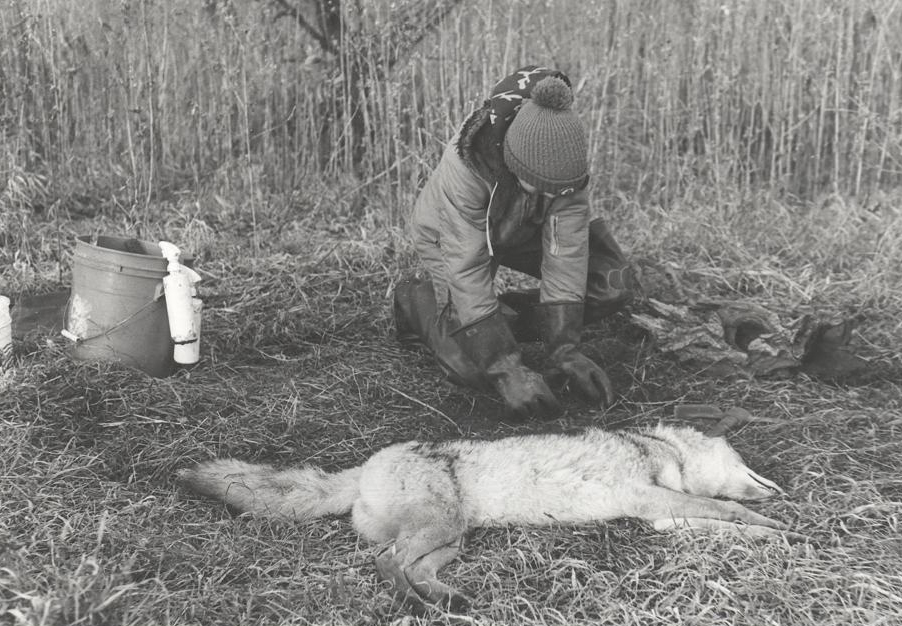 Authors son, Paul when he was young, helping to reset a coyote set after he and his Dad took a coyote from a hole set. (Gary Howey Photo)

Growing up in Watertown, South Dakota, a block from the Sioux River with numerous muskrat houses sticking up out of the sloughs and along the banks, a kid, just had to go trapping.

My younger Brother AJ and I got together some old traps, my Dad Cal’s WW II knapsack and we were going to cash in on the fur prices, anyway that was our plan.

We had a couple of good mentors, our neighbor Glenn Mattson and our grandpa Albert (Butch) Menkveld and with the information we gathered from them did manage catch a bunch of muskrats.

That was many years ago, yet, in 2020, I still have a shed full of regular, jump, double spring and conibears traps, stakes, trappers’ tools, trapper’s basket and other trapping gear.

Several years back when fur prices were decent, my son Paul and I trapped putting together a pretty good mess of furs, racoon, muskrat, mink, beaver, coyote, which helped make our Christmas a little brighter.

Trapping goes back a long was, as it was the mountain men that trapped beaver, helping to open up the central and western United States.

Why has the fur market changed so much this last couple of years, one of the main things, that trappers had harvested a huge number of furs, when prices were good and continued to trap, hoping prices would rise, that along with the pandemic has really hurt the fur market.

Trappers hoped that the fur market would rebound, but because of COVID Pandemic, over supply of ranch fur, hold over wild furs from the previous seasons, low fur demand from overseas and because of Russia and China’s slow economics, the fur trapping market has gone down the drain, causing the fur market prices to crash, with some fur buyers being stuck with pelts they’d overpaid for, more than they could get on the auction, with many of them taking a beating.

I was surprised to see in the beginning of our Nebraska trapping season that two fur buyers had posters out, indicating they’d be coming to Hartington, but unless you have the top furs, the prices aren’t going to be good.

Reports indicate that there’s nothing good to say about our 2020-2021 trapping season, skinned and stretched fur prices are going to be not worth much, with the only furs being bought from the trapper and callers will be the best of the best, the “Top” furs.

The COVID pandemic has hurt all businesses, it was especially hard on the fur business and because it was such a poor year for furs, the ’North American Fur Auctions, North America’s the largest fur auction house, declared bankruptcy, with trappers who had furs there, being advised as to how their furs would be handled and the trappers reimbursed.

Another fur auction company, the Fur Harvesters Auction Inc. in Ontario, now, the last place trappers can ship their skinned and stretched furs to be auctioned off to international buyers.

They scheduled a wild fur auction in late August, hoping the epidemic would be over, but because we were still plagued by it, it was impossible for them to run a normal fur auction.

Their March auction, would offer a large part of the left over 2019-2020 season furs, this was an online auction, where no one was allowed to come and inspect the goods, with the thirty buyers online looking to purchase only the best furs, with this auction not going over well.

The August auction was scheduled, but because of Canadian restrictions, the border being closed, with International travel not possible, only Canadian buyers could attend, with those there, not only buying for themselves, but also on the phone with International buyers as well.

Most interest was in heavy furred light-colored western coyotes, with a dozen brokers bidding, and again all on the phone for the entire coyote auction, taking instructions from foreign customers unable to attend in person.

The skinned and stretched fur prices at this auction were down from the year before, with coyote furs catching much of the attention with the best western coyotes bringing an average $77.00, with the lower quality western coyote furs averaging between $30.00 to $40.00 while the remainder, not being sold and the few that did sell, sold for $18.00 which a year ago would have brough two to three times that price.

Those smelly little critters, the skunk, their furs averaged $4.00 with sixty per cent of those furs being sold.

Raccoon, fox and mink didn’t sell because there was a huge hold over of furs from last year and now, along with the other unsold furs will be auctioned at their next event.

If you’re going to trap or call this year, you’ll be doing it because you enjoy the sport and to take out those critters, skunks, raccoons, opossums, fox and coyotes that create problems for upland birds and other wild game.

If you happen to get a good fur on one of the animals the buyers are looking for, it will be a bonus and help to pay for the gas used when you’re out trapping.

Gary Howey is an award-winning writer, producer, and broadcaster and inducted into the “National Freshwater Fishing Hall of Fame” in 2017. He developed and was the Producer- Host of the Outdoorsmen Adventures television series for 23 years and is the Host of the award-winning Outdoor Adventures radio program carried on Classic Hits 106.3, ESPN Sports Radio 1570 in Southeastern South Dakota, KWYR Country 93 AM and Magic 93 FM in Central South Dakota, As well as on KCHE 92.1 FM in Northwest Iowa.