Living the catfish dream on the Red River By Larry Myhre

For many Siouxland catfish anglers, North Dakota’s Red River is the place where dreams are made. It is where hundreds of dedicated cat men trek to each year to seek battle with one the toughest fish that swim, the channel catfish.

He is a full-time catfishing guide on the Red and also can arrange trips on North Dakota’s Devils Lake. He is also a nationally recognized fishing educator and outdoor writer. He is the author of the 2013 self-published book “Cracking the Channel Catfish Code” and his recently published “Advanced Catfishing Made Easy.”

Durick was on hand for last week’s Fish Fest hosted by the Sioux City Scheels store at the mall.

He is in his ninth year of guiding on the fabled Red. He expects a great season this year, but it will be hard to beat last year, he admits.

“It was an outstanding year,” he said. “You just happened to be there on the worst week of the year.”

Brad was referring to an April trip that Gary Howey of Hartington, Nebraska, and I had made. The river was 13 feet higher than normal, running dirty and full of floating snags and trees. But we still managed to catch plenty of catfish up to 16 pounds.

“Last October was just phenomenal,” he said. “Fully as good as Lockport, Manitoba, for numbers and size.

“With the low water we have now, I think it will just pick up where it left off,” he smiled. “If we don’t get some rain, it’s going to be hard on gear. I’m thinking the fishing is going to start really good in about two weeks. Water temperature right now is about 40 degrees, but when it reaches 50 degrees, it’s game on.

“As I was driving down here, all the water in the ditches was making me kind of jealous,” he said. “We had a winter which started off normal and then it just quit snowing.” 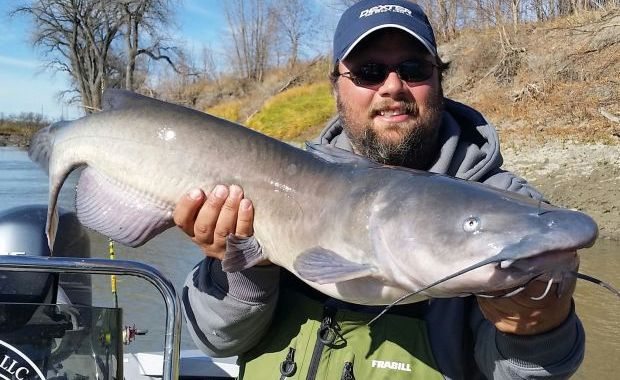 Durick fishes cut bait all year long, perhaps switching to frogs in a wet year when the leopard frogs begin migrating back to the water. For him, suckers and goldeye are the go-to baits, with suckers best early and goldeyes coming on later as a rule.

“If you can find them and get them legally, tullibies are working really good in the fall,” he said. “You have to read the regulations to make sure you’re using them legally. For instance, in Minnesota they have to be treated a certain way by licensed bait shops. In Manitoba they have to have the reproductive organs destroyed. They are a September-October bait and not anything to really fuss over until the fall.”

He fishes seven-and-a-half-foot Rippin Lips catfish rods with Amassadeur reels spooled with 30-pound-test monofilament. He uses a 2-ounce, no-roll sinker above a barrel swivel with a two-foot mono leader tied to a 7/0 or 8/0 Rippin Lips circle hook.

Brad says a typical daylong trip will usually produce about a dozen catfish. Some days may yield as many as 20 to 25 cats, but he says that is a heck of a day. Most fish in this area of the Red will average about 10 pounds, but most days he will put cats in the high teens in the boat or even one over 20.

He guides out of both Grand Forks and Drayton, North Dakota. He is a U.S. Coast Guard licensed captain, and fishes out of a 19-foot G3 aluminum boat.

“There’s about 70 miles of river between them and it’s like two different worlds,” he said. “Below the low head dam at Grand Forks, it’s pretty wild. Lots of log jams, a lot of structure you have to sift through. However, when you get up to Drayton, it’s like a mini version of the Red at Selkirk, Manitoba.”

“You can get started with a minimum investment in gear,” he said. “But, like anything else, the more specialized stuff you want, the more money you are going to spend to get it.

“I always tell people just starting out to get the original catfish book by In-Fisherman, read the book and then read it again. That, and time on the water, will be the two biggest lessons you can get as a beginner.”

“Of all the advancements I’ve seen in the last couple of years, I think the one that will make a big difference is electronics. Three years ago you could not get into side imaging for less than $1,000. Now, you can get it for a lot less and you can even get map making software and that is a game changer. That’s even affordable. You can get into that now for about $1000.

For more information about Brad Durick Outdoors, check out his website at www.redrivercatfish.com. His books are available through his website.

More outdoors infromation can be found at http://siouxcityjournal.com/sports/recreation/outdoors.

← Prev: Walleyes/Sauger Throughout the Spawn By Gary Howey Next: "ICOMOLD" Helping Quik-Load Get their Product to Market →