Warmest memories created in the cold By Larry Myhre

There’s nothing quite like that hour before dawn on the ice. Throughout my long ice fishing career, I harbor many cherished memories. It’s not the big fish or the number of fish I’ve caught on an outing that occupies the high points of my memory of many hundreds, or perhaps thousands, of hours and days on the ice.

No, it is those predawn hours spent on the ice of West Lake Okoboji through the late 1960s and early 1970s that come to mind most often. I was in my early 20s and just happy to be able to join the seasoned outdoors veterans who allowed me to fish with them virtually every weekend all winter.

They were a group of ice fishing addicts. They always ate a big breakfast at whichever lakeside cottage we were staying at. Then they were on the ice a full hour before daylight. And they stayed out there until a limit of perch was reached or dark, whichever came first. Lunch? Forget it. They might have a thermos of coffee and perhaps a snack in their bucket, but most likely not.

My idea of breakfast was a Coke and a cigarette. But I choked down the fried eggs, bacon or sausage and pancakes because I knew we wouldn’t eat again until about 7 p.m.

I was not an early riser. I would hear them banging around and yelling for me to get up. But I was often reluctant to leave the pleasant warmth of my sleeping bag. One morning, one of the group, a big, linebacker-type of man, picked up my sleeping bag with me in it and dumped me out on the cold floor. Another time he dumped me into a baby’s crib. He said that’s where I belonged. Do you know how hard it is to get out of a baby’s crib?

There we’d be. Sitting on a white, five-gallon bucket. If it were windy, a big rock would reside in the bucket so it wouldn’t blow away. Our short ice fishing rods were rigged with a Mitchell 308 spooled with four-pound-test line at the end of which danced a quarter-ounce Swedish Pimple spoon, its single hook sporting several tiny grubs.

So there I’d sit, back to the wind, wondering why in the hell did we have to start so early because perch don’t bite in the dark. Walleyes? Oh yes. They love that hour before dawn. But we were never on a walleye spot. These guys wanted perch. And they usually got them.

Those hours in the pre-dawn darkness reminded me a lot of listening to the marsh wake up when you are duck hunting. It’s eerily quiet at first and then you begin to hear sounds. It might be the wingbeats of ducks flying over, then later the quiet is shattered by the loud quacks of a hen mallard saying nothing in particular. Then the redwing blackbirds begin to sing.

On the ice it is the sounds of vehicles driving out, the snow squeaking under their tires. Loud voices. Laughter. The scream of ice augers punching through 30 inches of ice. All the while a pink tinge to the eastern sky begins to signal that there is, indeed, a sun. As that pink blush splashes into a hot red-orange glow all across the horizon you make out trees, their branches back lit by the morning light.

It’s another half hour before the sun finally crests the hills and splashes its light across the ice.

That’s about when you notice your first bite of the day. A faint pull on the rod tip and you raise it quickly, feeling the resistance of another Okoboji yellow-ringed perch at the other end. Even though the sun is now fully upon the ice, the day seems a little brighter.

And so it is with memories. Time makes them seem a little brighter.

You know it is cold when you see sun dogs dancing around the morning sun. And so it was that morning on a northeastern South Dakota lake which shall go unnamed. The temperature was double digits below zero and a wind would develop later that morning. But now the air was still as death and the cold was gnawing its way through my parka, but I stood outside the shack awhile watching ice crystals blotting out the horizon as if it were fog. 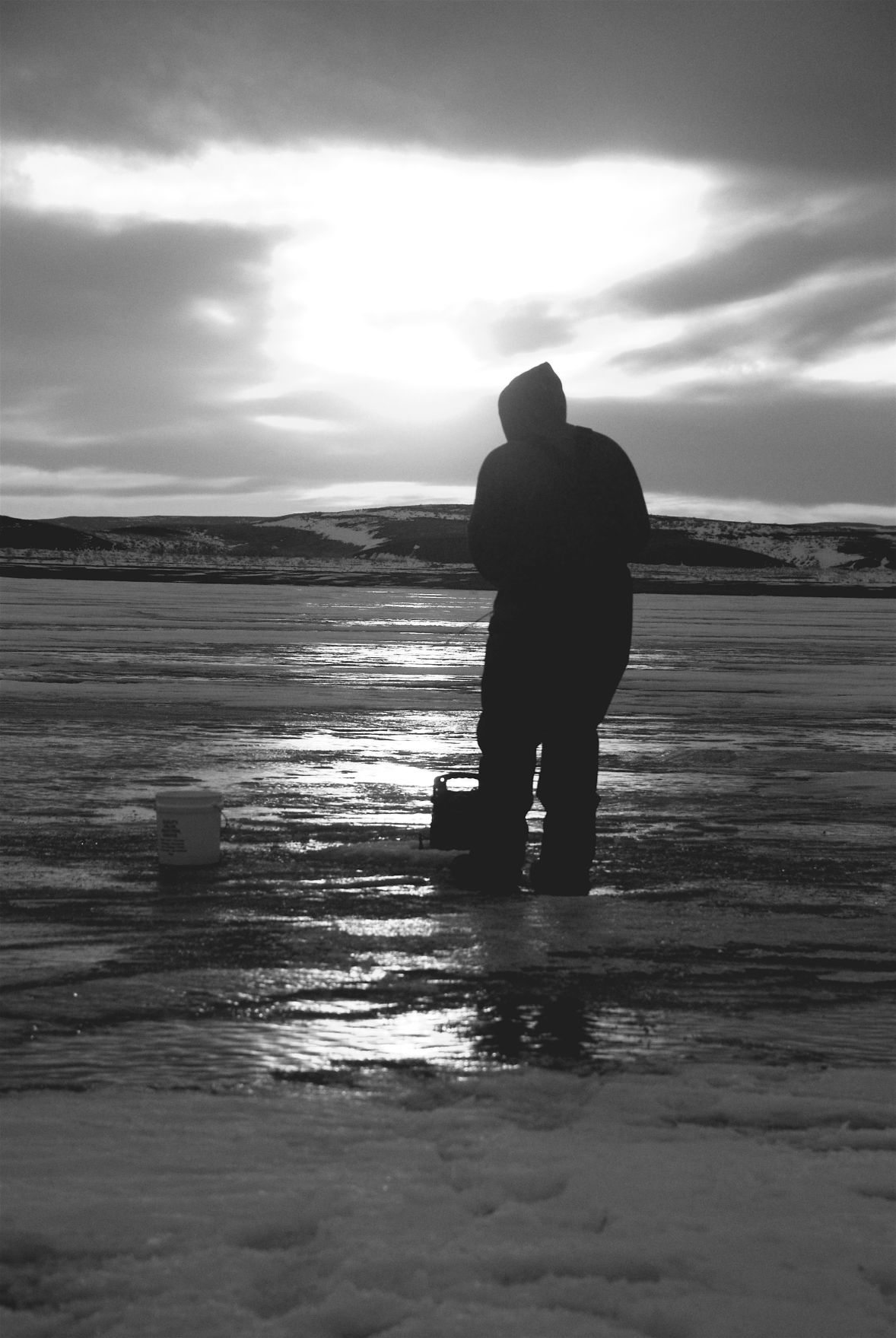 I don’t remember how the fishing was that day, but those sun dogs are sticking with me.

There’s a time during the ice fishing day that I’ve long called “the Happy Hour.” It’s that hour just before sunset. If you leave the ice as the sun is dropping over the earth’s rim, you just might be missing the best fishing of the day.

It was just such a time on another northeastern South Dakota lake. We were after walleyes and it had been slow going. I looked into my tackle kit hoping to find a magic lure. I saw two Salmo Chubby Darters I had bought the summer before in a Minnesota bait shop. It was the first year the bait was out and it had not yet acquired the fish-catching reputation it has now. Few anglers had even seen it.

I decided, “What the heck,” and tied one on. I sent it down the hole and chugged it up and down a few times and then I felt solid resistance. At first I thought I had snagged the bottom, but then the bottom began to move.

A few moments later we had the walleye on the ice. It weighed nine and a quarter pounds. As one of my group pulled the fish through the hole, he exclaimed, “He caught it on a crankbait!”

← Prev: Late Season Pheasant Hunt Watertown, S.D. Gary Howey Next: A Hunter and His Dog When it's Time to say Goodbye By Gary Howey →