Anyone who has had the opportunity to hunt late season pheasants in South Dakota can relate to what this column is all about.

Late season, after the weather turns cold means is when pheasant’s bunch up, sometimes into “huge” flocks.

It is also that time when every step you take on the frozen ground or in the snow that every critter within hearing distance is going to go on the alert.  This is the time of the season when the first bird takes wing that every critter in the slough will now know something’s is not right!

As our group of walkers started into the snow covered slough, the first of hundreds of pheasants erupted from the small group of cedars about 250 yards ahead of our wingmen while other birds hunkered down in the heavy slough, hoping our walkers would not find them.

Team Outdoorsmen Adventures member Larry Myhre and I were in the Watertown area taking part in a late season pheasant hunt with Chuck Stone, a friend that graduated with me from Watertown high School. Several other of our WHS classmates were also on the hunt; they included Dennis Murphy and Joe Jipp from Watertown and Tom Sokoll from Omaha.

Larry and I had been part of this event in years past and were never disappointed.  Over the years, the Stone’s, have developed several areas for pheasant hunting. Each of these has everything wildlife needed to make it through the tough South Dakota winters. The area has plenty of winter cover, several food plots as well as shelterbelts, all of which gave pheasants, deer and other wildlife a place to winter.

On this trip, I would enter the slough not equipped with my 12-gauge shotgun but handling the filming with a Sony Hi-Def camera with Larry serving as one of the blockers at the end of the first slough.

It did not take me long to realize how many pheasants were using the covered with cattail covered slough as there were fresh pheasant tracks in the snow going in every direction.

The Stones knew the area well, setting up the hunt giving the hunters the best opportunity to get a shot at a pheasant.  Many of the hunters in the group had good hunting dogs that worked in between the walkers, with wingmen working on either side out in front of our walkers and blockers strategically placed on the end where we hoped to push the birds.

Before us was a heavy cattail slough, a ridge off to our right with a cluster of Cedar trees at its northern end, off to our right was an open ridge leading into an unpicked cornfield (food plot) with all three converging into a short grass field where there were several round hay bales were out blockers would be posting.

As we entered the slough, it looked as if we could walk on top of the hard heavy snow bank, and then drop down working our way in and around the cattails, but a few steps in the snow turned soft with the walkers and me breaking through into snow up to our knees.

We were all having the same problem, except for the dogs as they could stay on top of the snow, following the numerous deer trails, which ran through the slough and working through the cattails trying to root out the birds that were holding tight. 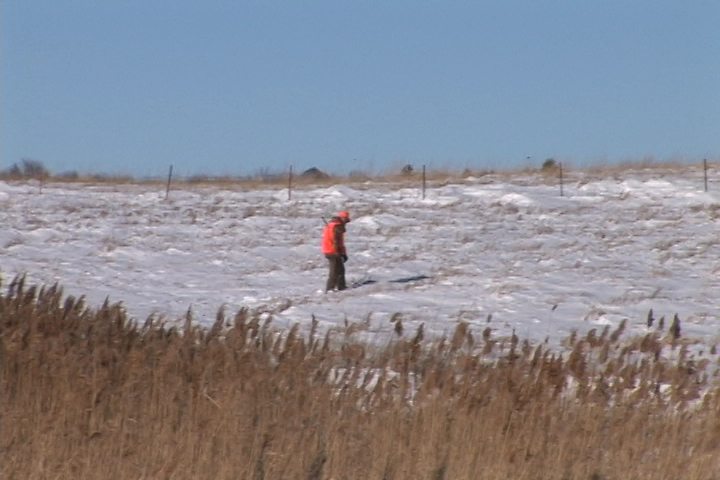 On late season pheasant hunts, walkers and wingman may need to make their way through light snow, and in other areas in snow over knee deep.

Off to my right in front of our wingmen along the outside edge of the slough, a herd of deer were breaking from the cover moving into the slough and food plot joining other deer moving away from all the racket made as we plowed our way through the snowdrifts.

Birds, both hens and roosters were erupting from the cover, most, well out of range of the walkers on either side of me. Several dozen birds kept coming out of the small group of cedars as our wingman and his dogs did their best to get to them through the deep snow to get to them.

The dogs to my right were getting birdy, forcing three hens into the air, as it moved ahead; it took a sharp left and plowed into a bunch of snow-covered cattails. The snow flew with the sound of strong wing beats heard as a brightly colored rooster burst from the bull rushes.

As the bird had came up the cry of   “Rooster” rang across the bottom letting all the hunters know what was coming their way.  As the rooster pumped hard, putting as much distance between itself and the dogs, hunters on both sides of me shouldered their shotguns, doing their best to catch up with and get a bead on the fleeing bird.

Several twelve-gauges sounded as one as the rooster folding, creating a white plume as it came down into the snow covered cattails.

Once the first shotgun went off, the birds became even more skittish, erupting from the snow well ahead of the walkers.

From where I was standing, it appeared as if many of the birds made the fatal mistake by flying within shotgun range of our wingmen and blockers as I could see birds on either side and ahead of me coming down into the field.

The first walk through the slough netted us over twenty birds and we had another slough that we would go into once we warmed ourselves up and watered the dogs.

The final slough was not as large as the first, so we would have a better opportunity covering most of the birds escape routed.

On this slough, I blocked on the end with Larry off to my right.  Almost immediately, as the birds came up and roosters spotted, we could hear the report of the walker’s shotguns.  The walker pushed their way through the slough, with their dogs flushing birds out of the deep snow. The first dozen pheasants coming our way were hens, a good sign for pheasant populations in years to come.

Finally a rooster flushed and winged my way and with a tail wind, flew towards me, coming over me much faster than I had anticipated and my first shot was well behind the bird with my second not quite as bad, but one I can’t say I was proud of.

Perhaps, it was that these South Dakota birds were much faster than those I had hunted in other states or maybe it was all the heavy clothes I had on and just maybe, just maybe, it was because I am not as quick on the draw as I used to be! Either way, I missed that bird and another by a long ways, indicating I need to do much more shooting before I come back home to hunt pheasants again.

We rounded out the day with over thirty some birds and even though I cannot say I put any birds down, I can say, I truly enjoyed being back in the Watertown area hunting with my Watertown high school classmates.  I spent time with some old friends as well as making other new ones and I am really looking forward to our next pheasant hunt in northeastern South Dakota, as it is home and an area where there will be a good number of pheasants to pursue next season.

← Prev: 3 Tips To Prepare For Spring And Summer Next: Warmest memories created in the cold By Larry Myhre →