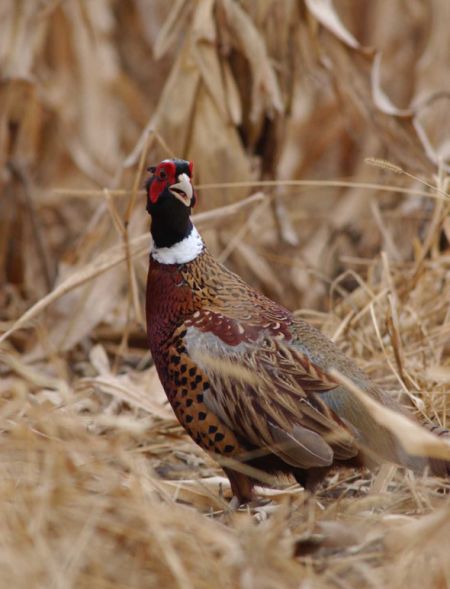 It wasn’t too many years ago that we had very good pheasant numbers in Nebraska, South Dakota, Minnesota and Iowa as we had some tremendous Conservation Reserve Program tracts, CRP fields.

Whole quarter sections then were in the program and it wasn’t only the pheasants that had increases in numbers, it was all upland game and these huge tracts of land, also gave the deer population great bedding areas.

Then the commodity prices shot up, with any field, no matter how small, with CRP tracts pulled from the program and plowed up, the shelterbelts bulldozed and ditches filled as everything went into cropland.

With this, the birds had literally no place to go, then a wet spring and bad winters clobbered the few birds that were left.

Now, with the commodity prices being low, the dollars that the farmers were given to establish CRP looked pretty good, with a few larger tracts being put back to native grass.

According to Pheasants Forever, going into 2020: habitat was in prime shape going into winter and coming into spring, with residual cover standing strong on the landscape. And then spring and early summer came: not too cold, not too wet, fairly warm.

You can see it in the roadside pheasant counts and surveys coming out of states like Iowa, North Dakota and Minnesota:

Where there’s good habitat, there are simply more birds on the landscape to hunt after a good hatch and brood-rearing season.

South Dakota, Kansas and Nebraska will still be good destinations, though the Great Plains are dealing with some habitat challenges from dry conditions.

In places like Michigan and Illinois, hard work by PF chapters is paying off with more habitat on the ground, and that means more bird

Because of this. In some areas, we’re starting to see better numbers of birds, nothing like the good old days, but, slowly but surely, they’re coming back as well as other wildlife.

Increases in pheasant numbers range from a 5% increase to 47% increase in Southwest Iowa.

Below are the reports in our part of the upper Midwest.

South Dakota suspended its longstanding and much-anticipated annual roadside pheasant count survey this past summer. Even without hard data, we’ll take some looks into South Dakota’s pheasant prospects for this fall and early winter.

With the wet weather last year, cattail abundance has skyrocketed across the landscape, especially in the entire James River Valley.

Cattails are a favorite habitat for pheasants, especially as winter sets in. In addition to providing a place to hunt, the abundance of cattail sloughs could positively influence pheasant survival this winter.”
It’s hard to find a place in South Dakota’s pheasant range that won’t offer good hunting. That’s one of the beauties of going to the Pheasant Capital of the World. It’s really all about the kind of terrain you’d like to see. Places to consider include the Northeast and its farmlands and prairie potholes, (think Redfield, Watertown and Huron), the Missouri River and James River runs (think Aberdeen, Pierre and Chamberlain), and the classics such as Winner, Mitchell, Plankinton-White Lake and Murdo.”

According to John Laux, Nebraska Game and Parks Upland Habitat and Access Program Manager. But to start let’s take a closer look at how the past year has played out for weather in Nebraska.
Like other midwestern states, pheasant populations aren’t necessarily impacted by mild winters like they are in the further north of pheasant range. This proved to be the case throughout the 2019-20 winter in Nebraska, with no mass mortality events noted.

Conditions throughout spring and summer continued to be favorable for pheasant production. Total precipitation noted throughout primary nesting season was above normal in the north-central and southeastern portions of the state.

Additionally, these numbers were slightly below average in other regions. However, the abundant moisture from 2019 provided a helpful head start for nesting habitat this year.
Habitat appears to be sufficient in most areas, but hunters should keep an eye on future weather patterns as habitat conditions may change between now and the season opener,” cautions Laux. “Dry conditions during late summer triggered emergency haying and grazing. Consequently, some publicly accessible, Open Fields and Waters (OFW) lands in these counties will likely be impacted this fall, so pre-season scouting is highly recommended.”

Nebraska continues to utilize RMCS to evaluate populations, with surveys being conducted in April, July and October of each year.

“Statewide, pheasant counts increased slightly (+5 percent) during this year’s July RMCS compared to 2019 but remain below the 5- and 10-year averages,” shares Laux. “Regionally, increases were observed in Southwest, Panhandle, and Northeast regions. The most notable increases occurred in the Southwest (+47 percent) and Panhandle (+36 percent) — which are considered the core pheasant range — and this year’s pheasant indices (within these regions) were equal to or slightly above their respective 20-year averages.”

The Conservation Reserve Program (CRP) is putting more acres on the ground, into habitat, which not only benefits the wildlife populations as the CRP grass acts as a filter, helping to remove the soils and other impurities, trapping it there, before it gets into our streams and rivers.

With the increase in habitat and if Mother Nature cooperates, giving us a mild winter and no untimely rains during the hatching season, our bird numbers should continue to increase.

The Cornhusker state’s pheasant opener is scheduled to open October 31, 2020 running through the end of January 2021.

Gary Howey, Hartington, Neb. is a former tournament angler, fishing & hunting guide, an award-winning writer, producer, and broadcaster who was recently inducted into the “National Freshwater Fishing Hall of Fame” in 2017. He developed and was the Producer- Host of the award-winning Outdoorsmen Adventures television series for over 23 years, which airs throughout the upper Midwest, he’s the Host of the Outdoor Adventures radio and a syndicated “Of the Outdoors” columnist.  For more outdoor information, check out garyhoweysoutdoors.com, outdoorsmenadventures.com and like Gary Howey’s Facebook page or watch his shows on www.MyOutdoorTV.com.

← Prev: Before putting it away, Winterize your Outboard By Gary Howey Next: Waterfowl Season Looks good for Central Flyway By Gary Howey →