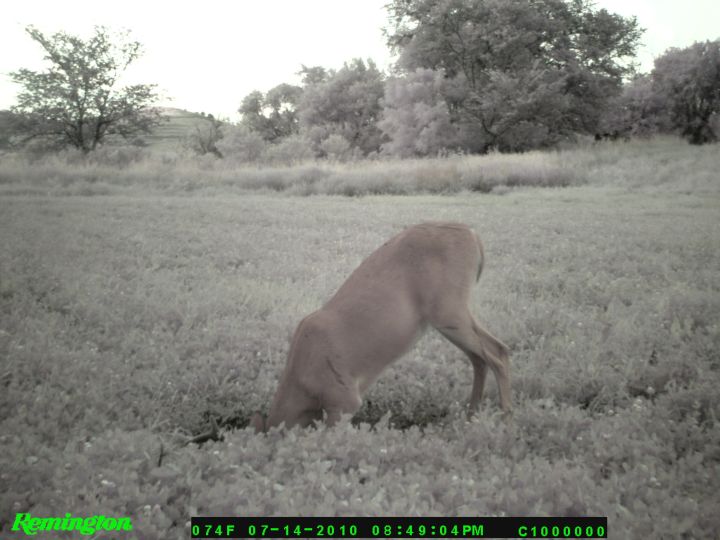 Mineral Licks placed near food plots are a winning combination, giving deer the nutrients, they need. This buck has been using this site for months and now is digging deep to get the nutrients it needs. (Outdoorsmen Productions Game Camera Photo)

It won’t be long before fall arrives on the 22nd of September, wit hour archery deer, grouse and dove season opening up in the same month.

if you planted your food plot in the spring in an area the deer were using, you should have enough growth by the opening of the archery season to attract deer into your plot.

I’ve hunted over food plots in many states, both up north and down south for years and truly believe that if food plots are placed in close proximity to where deer travel, they benefit the deer, turkey and other wildlife.

When putting in a food plot, you need to choose a seed mixture that gives the deer what they need throughout the year.

The spring  plots where growing at the opportune time for the bucks to help build themselves back up after the rut, as it was hard on the deer,  especially the bucks as they were running all over the country, looking for receptive does and fighting any-and-all bucks they run into, which consumed much of their energy and body fat.

Throughout the year, the food source for deer changes, with their nutrient requirements also changing, as they’re recovering from the breeding season, the cold winter, developing their racks and birthing.

In January, February and March when food is scarce, deer need a food source high in carbohydrates in order to survive the cold of winter.

This time of the year when the food source, food plots are essential as the main source that deer feed on now is browse, woody plants, twigs and buds, until things begin to green up.

With the arrival of spring, deer, especially the bucks still need a high protein food source, like clover and alfalfa to help build muscle mass.

In the late spring, bucks start developing their racks and need a high protein and carbohydrate food sources, which includes alfalfa and clover as well as others that are high in calcium as well as phosphorus with some of these minerals being  needed found in the soil, with the food plot providing the deer with additional carbohydrates.

As summer approaches, deer need food sources high in protein and sodium which include corn, beans and milo.

Then in the fall, the deer are in need of those plants high in carbohydrates such as alfalfa, oats, clover and wheat.

They’ll also feed on hardmast, the nuts produced by the oaks, acorns as well as softmast, fruit, apples, plums and pears.

Food plots, provide many of the nutrients needed by the deer, so if you’re hoping to build up your herd and help the bucks to develop larger racks, the right plantings can help make you reach these goals in a shorter period of time.

Spring is not the only time to establish food plots, as excellent food plots can be established in the fall, with July, August and on into the late fall, the best time to plant your food plot as weeds are starting to die out with an increasing chance of moisture.

Plantings established in the late summer and fall can still be hunted over as if you were lucky enough to get timely rains on your plot, it’s a good bet that the deer will be using it when archery deer season rolls around.

Once a food plot is established, there should be enough available food to feed the wildlife, throughout the year, especially, when they really need it, after the crops have been harvested, when the deer have very little if any food available.

As summer turns into fall and there’s less daylight, there’ll be changes in the nutrient requirements  of the deer, as it’s not those rich protein crops that they’re searching out, those that earlier helped with antler growth and helped to build up their muscles and their bones, as now they are in need of carbohydrates.

The fawns are now feeding themselves, now all deer will be looking for a food’s rich in carbohydrates, helping them to gain weight and add fat before winter sets in.

In order to get some excellent information on late July and August plantings, I talked with Glenn Thoene at Top Crop in Hartington, Nebraska about what seed varieties they recommend for late summer and fall plantings.

Glen indicated, “a good blend, one we use when putting in food plots in late summer and fall would be a Winter Wheat-Rye mixture plus Brassica that includes; Hybrid Radishes and Turnips as well as some Rape seed.

There are several ways to apply the seed, at Top Crop, we can broadcast the seed, drill it in or put it in with a Brillion seeder.

He emphasized that no matter how you seed it, you’ll have your best luck if you pack it when your finishing up.

If you’re planning on broadcasting the seed, it works well if a small disc is used to work up the location before broadcasting, then once the seed is broadcast, to harrow it in and pack it.

As with spring plantings you don’t want to neglect fertilization, with an 11/52/0, starter fertilizer working well to help get the seeds started.”

Several years ago, when I established my first plantings, I used Glenn’s seed mixture and planted

My smallest food plot where numerous deer trails came together.

The smaller one was not far from several of my larger plots, none were that accessible to larger equipment, so we put them in with a garden tiller and my Honda Pioneer and as small as it was, it was one of my most productive plots.

As I mentioned earlier, the location where you plant a food plot is important, with the location you choose being a big factor, as it’s easier for the deer to find it if it’s along or near one or several of their trails.

Once I had the plot put in, I then put out several game cameras in different locations to see how the animals reacted to the food plot.

The Winter wheat, Rye mixture was eaten down quickly, while the Brassica and  Turnips had their leaves chewed up, with the deer paying little if any attention to the root plants until after the freeze, when the sugar went down into it , giving them food that they devoured on into the  winter months.

Some folks believe that smaller areas aren’t large enough for a food plot, this is not true, as even the smaller food plots are beneficial to some wildlife.

On the other hand, they might think the area they would like to put a food plot would be too hard to get into.

If you have access to an ATV or UTV, like the Honda Pioneer I use, you have the biggest part of the problem solved as they can get into some very tight areas and there are numerous manufactures that produce numerous types of tillage equipment that can be pulled behind them.

If you want a planting, a plot to feed deer, increase body size, promote overall herd health and improve their antler mass, select a site that’s out of the way, somewhat isolated.

A secluded, undisturbed area will draw more wildlife to the plot, allowing wildlife to travel to and from it without fear.

They work best if they’re close to the animal’s travel route and close to cover, making it easier for wildlife to get to the food plot without using up a lot of energy. Deer, especially the bucks can be in tough shape and the less distance they travel to get nourishment the better.

The same goes for turkeys, if they need to come out into the open in order to get to food, they’re more visible and easier for prey to find.

If you are going to all the trouble to put in a food plots, why not establish a mineral supplement lick?

Don’t think that by putting in a salt block that you’ve given deer everything they need, as salt will attract deer and the sodium in it is something deer may need, but they don’t contain everything that bucks and does need to prosper.

A buck’s antler when hardened is made up of 30 to 35% calcium and phosphorus, so it just makes sense to have a mineral supplement that contains these two nutrients. The does also need a higher amount of nutrients for milk production to feed their fawns.

I’ve used RAKS minerals for years and have seen the overall size and mass of the bucks’ racks increase as well as the overall health of the herd looks as if its improved.

Don’t just pitch the mineral on the ground, it works best if you remove the vegetation, then work it into the soil as the deer are used to digging for it.

I like to add some water to the top of the RAKS, as it seems to release the deer attracting scent that will allow them to locate it faster.

The reason that some licks get little attention, May be because the deer were able find the nutrients they need in the soil, leaving the lick alone until they need it, then, dig deep to get to it.

As mentioned earlier, at different times of the year, deer require more or different nutrients, and because of this, your mineral lick may show very little sign of use in some months and a lot in others.

It’d recommended that you freshen up your mineral licks from time to time, so you’ll have it out there when the deer decide they need it.

← Prev: Don’t get stuck in the same old Rut When Fishing Next: Dan Bailey By Larry Myhre →