WATERTOWN, S.D. — Late season pheasant hunts can be brutal. And this was one of them.

Temperature was in the teens. Wind was howling out of the northwest at 20 to 30 miles an hour.

I hunkered down in the snow, letting the big, round bale block most of the wind. Over a half mile away a long, thin line of hunters, all friends and veterans of many such hunts, were slugging it out in snow that had crusted on the top, but not enough to support their weight.

Occasionally I could hear a shot, small retorts carried away by the wind.

Then I saw deer busting across a small open field and disappear into the trees. From this distance they looked like long-legged ants scurrying away. I would later learn that the hunters estimated that over a hundred deer were spooked out of the timber.

I wasn’t surprised. We had driven along a field a couple miles to the west and the number of deer trails was unbelievable.

Gary Howey, Hartington, Neb., and I were here as guests of Chuck and his younger brother Rick Stone, both of Watertown. We were hunting private land in the vicinity of a private hunting lodge the Stones own that served as our headquarters. 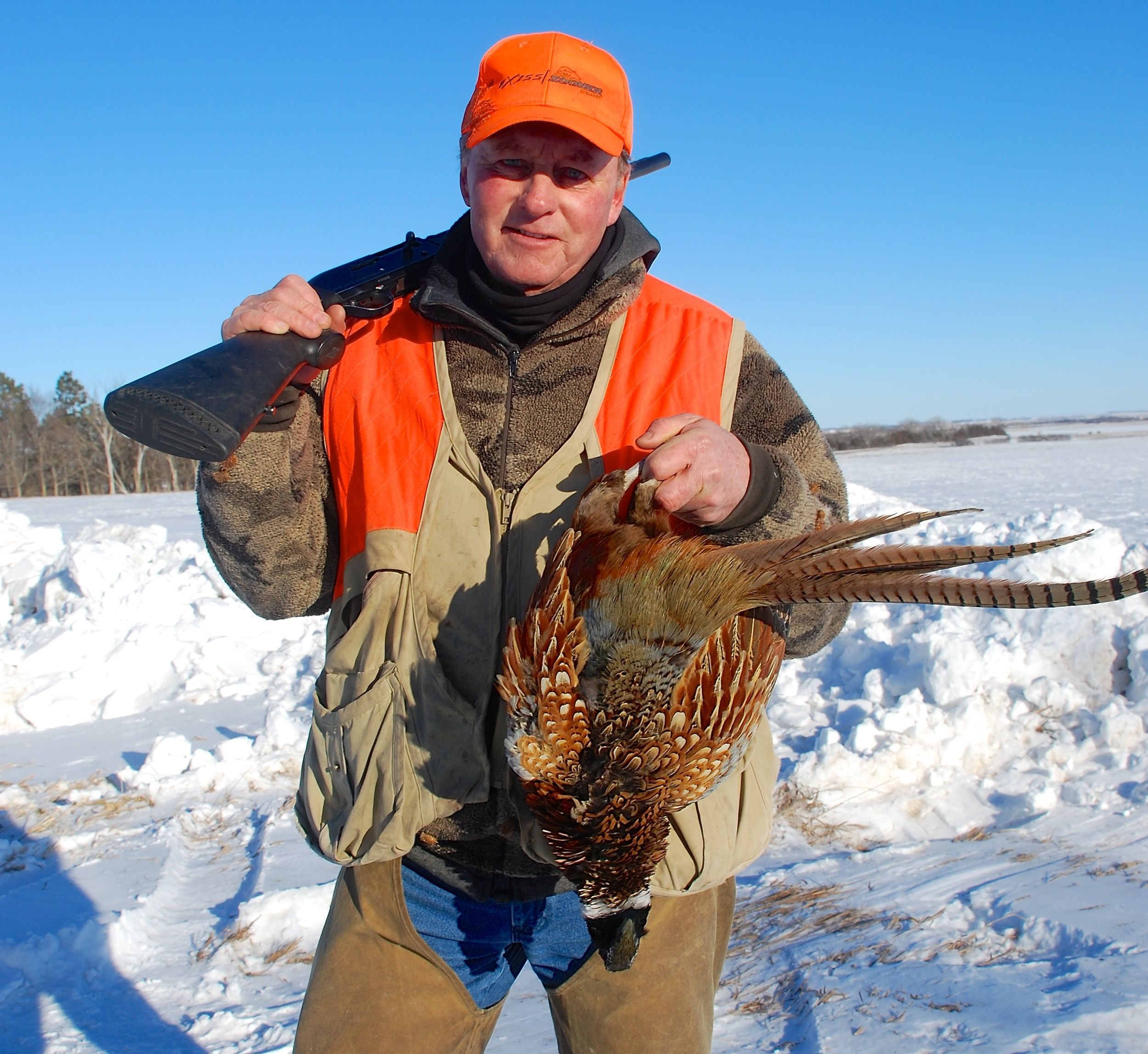 Chuck Stone, Watertown, S.D. holds one of the pheasants he bagged during our hunt on private land northwest of town.

We’ve hunted here a few times in the past. It usually works out, and it did this time, that a few Watertown High School graduates form the nucleus of the hunt, This time it was Chuck Stone, Dennis Murphy, Tom Sokoll, Joe Jipp, all from Watertown, and Gary. It was a kind of high school reunion, only better. All told there were close to 20 hunters making up the group.

The cover the hunters were walking consisted of windbreaks, CRP lands, sloughs and food plots. The deep snows captured by the heavy cover made walking a very tough job.

It was slow going for the group, but eventually I could make out hunter orange draped figures making their way toward where we blocked.

Eventually a few birds began winging over us. We were looking right into the sun, which hangs very low in the southern sky this time of year. It was virtually impossible to identify hens from roosters because they were backlit so severely. They had to be right over you before you could be sure.

Late winter hunts usually means spooky birds, and this was certainly the case here. Most of the shots were long and the birds used the wind to their advantage. This time of year you are best armed with a 12 gauge firing high velocity number 4 or 5 shot through full chokes.

More outdoors, information can be found at http://siouxcityjournal.com/sports/recreation/outdoors

← Prev: True Conservationists "Hunters" By Gary Howey Next: Eight lures you should fish, but may not By Larry MYHRE →