Into the Blue Carroll Lake Fly-In By Gary Howey

As the Otter float plane, lifted off the water, banking to east, a sea of blue appeared on the horizon. We were flying into Sunset Country Ontario, Canada to fish Carroll Lake. What appeared on the horizon proved what I had heard about the province to be true, that there are more than 250,000 lakes in Ontario with about one-fifth of the world’s fresh water.
Our destination was The Lodge at Carroll Lake, a lake twenty-two miles long that lies one hundred sixty five miles northeast of Winnipeg, Manitoba, in the Woodland Caribou Park on the Ontario and Manitoba border.
Approached the lake, the Otter, came around, with the Lodge and cabins coming into view, looking much like a photo you would see in National Geographic.
The lodge and cabins, nestled among the pine and birch trees, lay along the shoreline of the calm waters of the bay.
The Otter slipped into the dock where passengers Tami Brinkman, Mitchell, S.D., Randy Smith, Yankton, S.D., Chad Tramp, Ankeny, IA., Larry Myhre, Sioux City, IA. and I were greeted by Steve Brinkman and his crew.
The main lodge, a huge building with a large stone fireplace would be where we would eat our meals prepared by the Lodge Chef.
We would be at the camp for two days and were anxious to test the waters for some of the excellent fishing available in these Ontario waters.
It would not be long before Steve, Larry and I launched in one of the Lodge boats with Randy and Chad following in another, we were about to experience a trip of a lifetime.
The weather prior to our arrival did not seem to be in our favor, as it rained hard for several days. We were not sure what to expect as cold fronts had been moving into the area on a regular basis, which always indicates a tough bite. We were pleasantly surprised when shortly after we arrived in the narrows. Steve, who was rigged for the occasion, pitched his jig towards the shoreline. On his second cast, he felt the extra weight indicating a pickup. He set the hook as an angry walleye shook his head violently, attempting to dislodge the jig. The fish was a healthy seventeen-inch fish and the first of a hundred or so we would boat before our trip was through.
As we drifted through the narrows, my line peeled off the reel, winging my one-eighth ounce jig into the shallow water along the shoreline. Two cranks into the retrieve, my rod bucked in my hands as another of the Carroll Lakes walleyes came to the boat. Larry connected shortly thereafter, as did both anglers in our second boat.
There was not a moment when one of our groups was not bringing a fish into the boat. All were sixteen to seventeen inch walleyes as well an occasional pike.
Steve, wanted us to see all that the area had to offer, so we headed for the falls where the water cascaded over the rocks into the lake. Once again, it was “fish on” as one or more of our group was bringing a fish to the boat.
As I set the hook on another walleye, I glanced over to the second boat, where Randy was also battling a fish. As I landed my fish, he lifted a chunky perch into the boat. Randy, who had fished at the Lodge before, and his partner Chad, were putting the hurt on the walleyes, as it seemed as if one of them was continually bringing one into the boat. 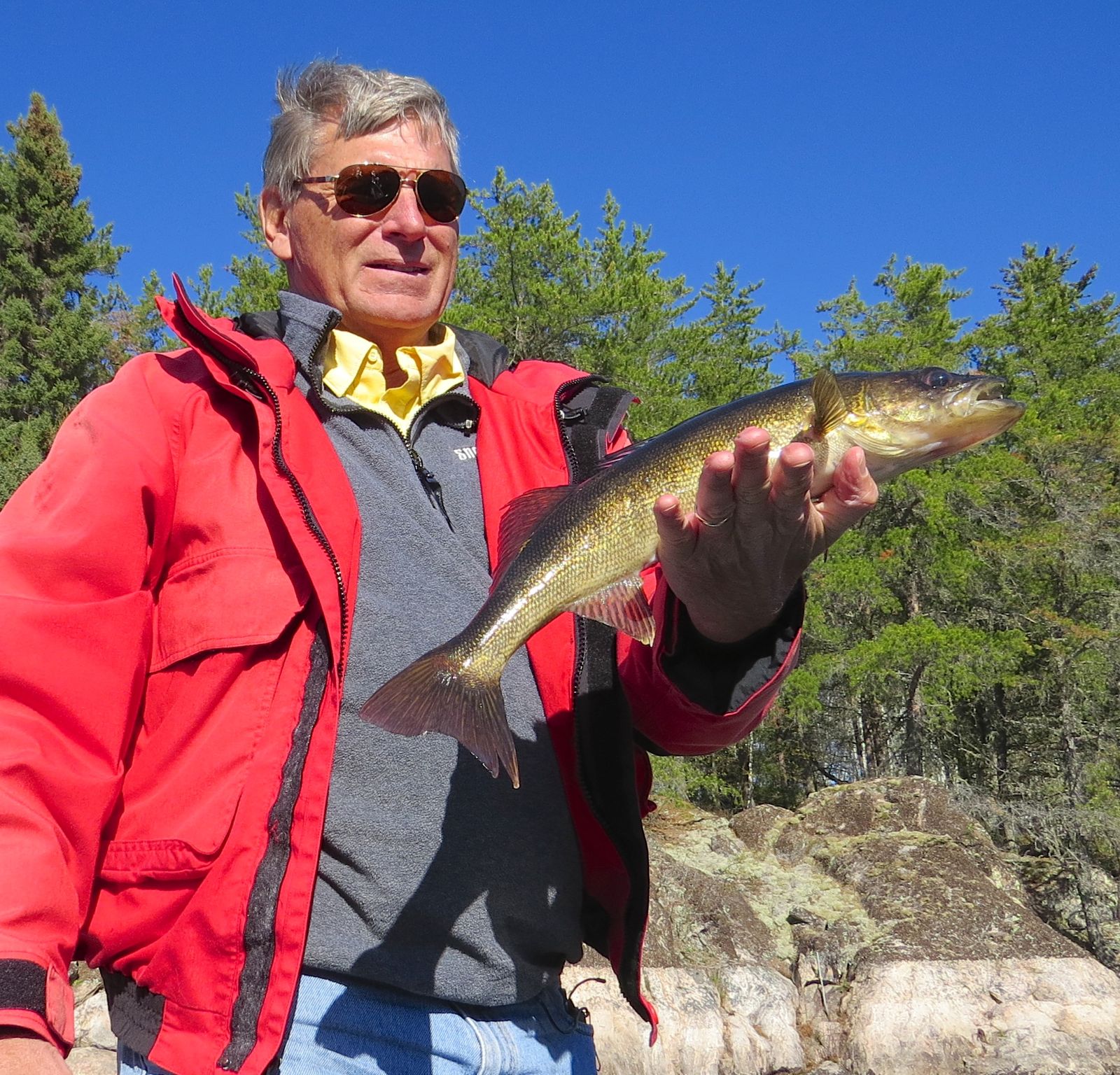 Larry’s jig seemed to be much more attractive to the pike, the water wolf of the north, as he hooked several of the hard fighting fish before connecting with a walleye. Pike are varcious feeders, tremendous fighters and because of their razor, sharp teeth and sharp gill plates are notorious for destroying tackle. Many of the walleyes we landed were scarred, indicating they had gotten a bit too close to the pike roaming the area.
There was a tremendous number of fish in the waters in front of the falls, as both boats were catching, three-pound walleyes, pike from the “hammer handle” size on up to ten and twelve pounds, perch up to three-quarter pounds as well as other species.
I reared back, firing a jig toward the fast water of the dam. As my jig drifted to the bottom, my line went off to the side, indicating something had inhaled my bait. I expected the fish I had hooked to be another of the hundreds of walleyes we had been catching. However, once I reared back on the rod, setting the hook, it was obvious this was no small fish.
Because of the size of the fish we had been catching, those in the two to three pound range, my drag had been set fairly tight. As I applied pressure to the fish, my rod tip plunged downward towards the water, putting pressure on my six-pound test line. Loosening the drag, I fought to keep the fish out of the rocks. Slowly but surely, I was winning the battle, tiring the fish out and when I finally got the fish near the boat, I was not sure what I had hooked.
“It’s a whitefish, a big whitefish!” Steve indicated as he slid the net in under the fish. Could have fooled me, I had no idea what it was. We estimated the fish at seven pounds, which is big for a Master Angler whitefish in Ontario, is twenty-two inches.
Someone in the two boats was always battling a fish as we boated well over a hundred walleyes in the day and half we were there with the bite picking up about the time we were to leave.
We pounded the walleyes, every time we went out, keeping a few for lunch and releasing the rest.
A day and a half just is not enough time to take in all that the Lodge on Carroll Lake has to offer. As we waited on the dock for the Cessna floatplane to take us out, Steve made a few casts from the dock, landing a small pike and the largest walleye of the trip, a four-pounder.
Soon the sounds of our plane could be heard as it approached the lake, set down and neared the dock. As we prepared to leave, our surroundings were lit up by the vibrant Ontario sunshine, making us wish for a couple more days at the Lodge.
My trip to the Lodge on Carroll Lake was my first fly-in to Ontario and hopefully will not be my last.
For More information on the great fishing at the Lodge at Carroll Lake, you can contact Steve Brinkman at 605-999-7467, on line at brinkmansteve@hotmail.com or on the web at CarrollLakeLodge.com.
More information on the fishing opportunities found in Ontario can be found at www.gofishinontario.com with Information on the Sunset Country, Ontario Canada available at www.ontariossunsetcountry.ca