As we drifted along one of the many shale bluffs on Lake Francis Case, the tip on Steve Thompson’s rod jerk violently  when  another walleye pounded the minnow at the end of his bottom bouncer rig.  Thompson, who was stationed in his wheel chair at the back of the boat, set the hook, bringing a chunky fifteen and a half walleye into the boat.

Thompson was doing a commendable job of putting it to the brothers, as he was one walleye up on both of them.

I was filming with Steve on a volunteer boat, captained by Bob and John Jarding of Sioux Falls. It was the second day of the event with the Jarding brothers’ boat being one of the forty-one boats volunteering to take part in the Firefighters North Central Chapter of the Paralyzed Veterans of America and Joel Niemeyer Memorial fourteenth annual walleye-fishing event.

The first event  started out small with just six boats and six veterans and grown steadily into what it is today. This year’s event,  a memorial to Niemeyer, as he was one who truly cared about our veteran’s and was a strong advocate for them and was the executive director of the North Central P.V.A. for 15 years.

The event, was created after Niemeyer attended a “Fishing Has No Boundaries” event.  After that event, he felt a similar one would be an excellent project for the P.VA and with the help of firefighters and volunteers from the Tri-State areahe helped to create a similar event , giving some of the attendees their only opportunity to get out on the water to do some fishing.

This year’s event included forty-one anglers comprised of P.V.A. members, veterans, firefighters and other individuals, many of them in wheel chairs as well as forty-four volunteers and their boats. Many of the boat captains have been with the event for many years, volunteering their time and their boats to give others an opportunity to spend time on the water and go fishing.

The Chamberlain crew, volunteers, boat captains, their crews, veterans groups and regional firefighters from three states all worked together like a synchronized ballet.

One of the volunteer boat captains, Kirk Klos, LeMars, IA.  would be fishing with the same individuals he had been with the year before. This individual had only had the use of his hands and fished by tapping on an electric reel, allowing him to reel in the fish. 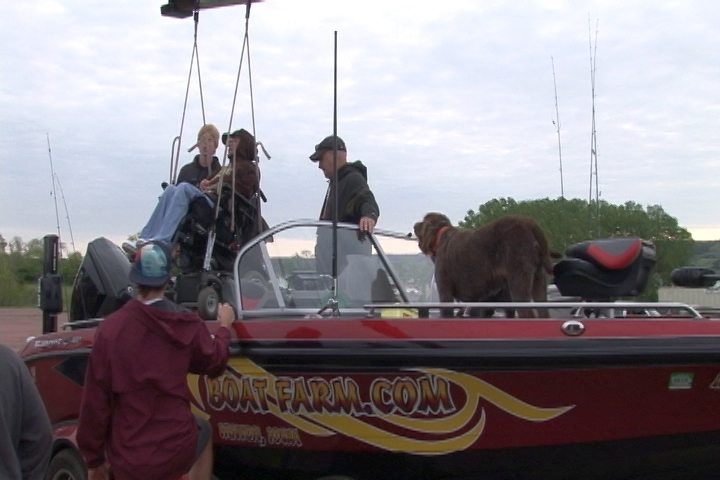 Angler being lifted into boat at the Firefighters North Central Chapter of the Paralyzed Veterans of America and Joel Niemeyer Memorial annual Fishing Event held in Chamberlain, S.D.

On day one of the event, we launched out of Cedar Shore’s Marina on the river in Chamberlain, S.D. where I partnered with Sioux Falls firefighters Al Hallstrom and Nick Kurvink. They shuttled my camera and I downstream from Chamberlain allowing me to film those in the event and while I filmed, Al & Nick managed to bring in some nice walleyes.

We had to fight the wind as the 37 M.P.H. gusts making filming and boat handling difficult, with the help of Al and Nick; I was able to film some of the other attendees fishing on the river.

That evening, we all got together at the Oacoma Community Center for a beautiful meal provided by the local VFW and the American Legion where drawings were held for door prizes distributed to many of the attendees.

Prior to launching the boats the following morning, we were treated to an excellent breakfast prepared by volunteers at the Oacoma Center.

The second day,  I would be with the Jarding brothers and Steve Thompson where our boat as well as others made the run down to the White River where fish had been caught the day before.

The day started out with some good-natured ribbing on who was going to catch the first keeper fish and just how much money would be bet.

The White River again, belched stained turbid water, muddying up the water both up and downstream from its mouth. Using bottom bouncers and snells as well as jigs tipped with minnows and crawlers, the bite started quickly with Thompson going up one on John. The lead Thompson had didn’t last long as John quickly caught up with him and after they pulled in several walleyes and some small sauger, the bite slowed and we moved down on Carpenter Flats to see if the fish from below had slid up river to avoid all the boat traffic near the White.

Thompson and the Jarding brothers traded off on with who had the most fish, ending the day in a virtual tie and just one fish short of their three-man limit. They like many of other boats caught near to if not their limits, making this two-day event, even though windy, very successful.

I can’t imagine all the work that goes into an event of this magnitude, the man-hours and all the volunteers needed to come together to put on such a great event for fourteen years running.

It’s a volunteerism marvel and the folks who worked so hard to put this event together should be commended, as this was no easy task and it came off flawlessly.

← Prev: How Deep Should My Food Plot Seed be Planted? Next: Walleyes elude us on Lewis and Clark Lake By Larry Myhre →