Walleyes elude us on Lewis and Clark Lake By Larry Myhre

Brian Bashore, one of the “Walleye Guys” guiding team, eased his Ranger out of the boat ramp basin of the Lewis and Clark Recreation Area and pointed it into the main lake.

The wind had gone down, but Gary Howey, Hartington, Neb., and I wondered just how long Mother Nature would stay quiet. She has been really generous with her wind this spring, and while we wanted a decent “walleye chop” we didn’t want a raging maelstrom which this shallow lake can become in heavy wind.

“I’ve found some walleyes on a shallow flat just off the north shoreline,” Brian told us as we idled out of the ramp. “It’s been a jig bite, but we might try pulling some bottom bouncers as well.”

The big Mercury outboard was sending the boat up the lake at a good speed, and Brian soon pulled into the shoreline where a deep ravine split the storied chalkstone bluffs which line both sides of most of this lake.

The shallow flat extending out from the ravine sported a small rock pile as well as a few scattered wood structures.

We tied on 1/8-ounce leadheads, tipped them with a piece of crawler and began casting as Brian held the boat in place with the bow-mounted electric motor.

It didn’t take long for Gary’s rod to dip with the bite of a fish. 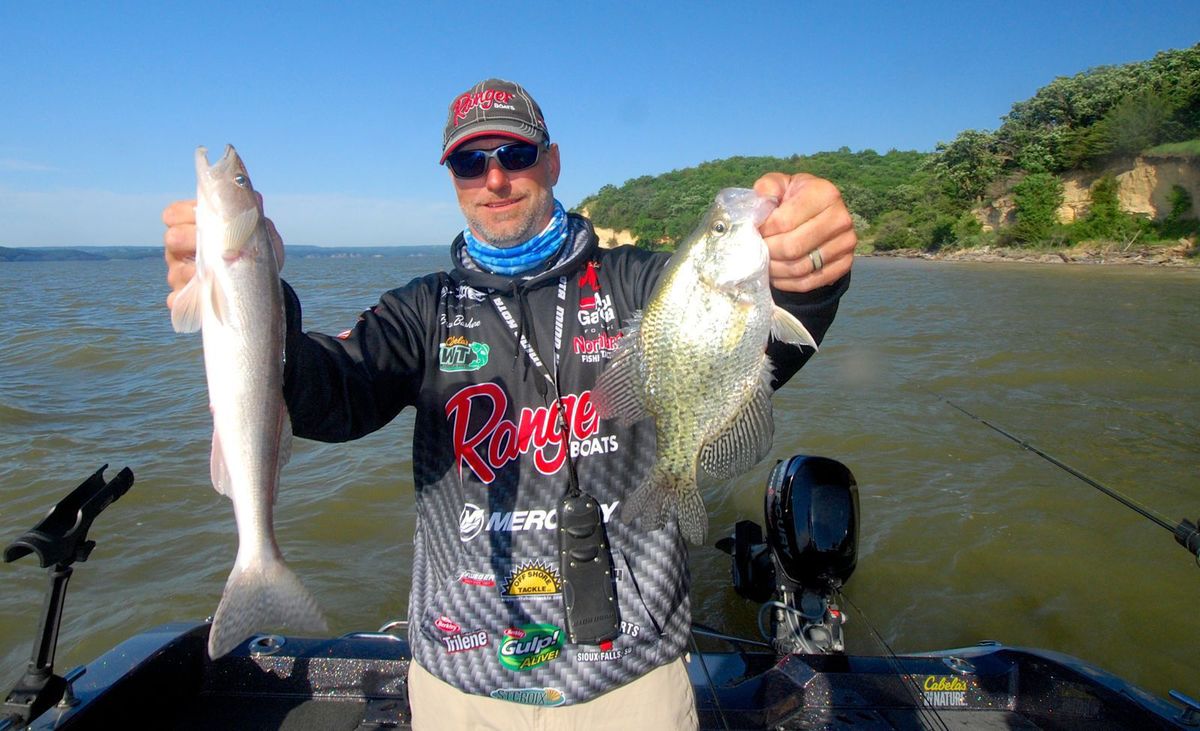 Brian Bashore, The Walleye Guys Guide Service and two of the species of fish caught on a recent trip to Lewis & Clark Lake.

“Fish on,” he said as his 6-and-a-half foot graphite spinning rod bent and began to throb as the fish tried to power back into the depths.

Brian grabbed the net. I watched the rod tip and saw it dive as the fish shook its head and attempted to go back to the bottom.

“That’s a good walleye!” I exclaimed.

Just then the fish surfaced. It was a 3-pound freshwater drum.

“I knew it was a drum,” I lied. “Just wanted to get you guys excited.”

On the next pass it was my turn.

My blood pressure jumped a few points as I set the hook into a solid fish. Again it was a bull-dogging fight.

“Another walleye,” I said, hoping beyond hope that it would be.

The the fishing gods were not smiling on me. They were scowling. Another drum, maybe 2 pounds.

“One thing about Lewis and Clark,” Gary deadpanned. “There’s no shortage of drum.”

But on the next pass, things brightened.

Brian and I doubled. His fish proved to be a small sauger and mine, a respectable crappie.

Lewis and Clark actually has a pretty good crappie fishery, but they are hard to find. For years I had a spot up in the river section where I could go at a certain time during a certain month and catch all the crappie I wanted from one-half to one-and-a-half-pounds.

I guarded that spot like it was Fort Knox. I took no one there, not even my mother.

But the flood of 2011 blew it out. There are still crappies there at the right time, but nothing like it used to be.

“There are lots of crappies up around the marina by the dam,” Brian volunteered. And that’s not exactly a secret so I feel free to relate that here.

We fished most of the day, hitting other spots, pulling cranks, bottom bouncers and casting jigs, but the walleyes evaded us. The Niobrara is pumping mud and the upper third looked pretty dirty to me. Walleyes don’t like that.

They also don’t like an east wind, and we had that, too.

We managed to catch a half dozen small sauger. They should grow above that 15-inch minimum length next year. That is required before you creel a sauger or walleye on this lake, except during the months of July and August. Only one can be over 20 inches. The limit is four. Possession limit is eight. You should also be aware that high grading of fish is illegal. If you put it in the live well, you keep it.

Gary and I stayed in a three-bedroom cabin at the Lewis and Clark Resort. These are mighty fine accommodations, providing everything you need in the kitchen and bathroom. Check out their website at: www.lewisandclarkresort.com or phone: (605) 665-8613.

It’s a painful fact of life now that invasive species have required a whole new layer of laws and rules to which we must abide. Read your fishing regulations pertaining to this. And then reread them. Zebra mussels have a strong foothold in Lewis and Clark Lake and there are other invasives present. Its a fact of life now in most of the states in which we fish that all vegetation and water must be removed from your boat and trailer when you leave the lake.

Drain plugs must be pulled, live wells drained and lower units blown out by turning the motor over before you leave the ramp.

If you are a non resident and launch your boat in Nebraska waters, you must purchase a $15 Aquatic Invasive Species Stamp and display it on your boat. Nebraska residents will pay an additional $5 when they register their boat for three years.

To learn more about the “Walleye Guys” guide service on Lewis and Clark and other lakes, check out www.thewalleyeguys.com. Brian and his partner Brent Henrikson are walleye fishing addicts who are either guiding on Nebraska or South Dakota waters or are participating in walleye fishing tournament across the nation.