Jamie DeBruyckere indicated “He’s getting birdy” as she moved up behind the dog, as Jack, had the bird holding tight.

We were attending the 2017 Minnesota Governor’s Hunt held this year in Marshall, Minnesota.  On this hunt, KWAT Outdoors radio host Don Fjerstad, Watertown, S.D. and I team up with Arlyn and Jamie Bruyckere on their CRP field about 5 miles outside of Marshall.

This was seventh annual Minnesota Governor’s Pheasant hunting opener, Minnesota Governor Mark Drayton created the Governor’s hunt in 2011, his first year in office and in 2015 he convened the Minnesota Pheasant Summit introducing a ten-part action plan to expand pheasant habitat and increase the number of pheasants in the state.

The pheasant opener would kick off Saturday October 14 and there were other events held on October 13.

On “Friday the 13”, Don and I headed to the Sporting Clays range at Shooters Sporting Clays to try our luck on their Sporting Clay range  Going on at the same time, on the opposite side of the property the SMSU High School Trap Shoot Challenge was going on.  In this event, the top ten participants from five Minnesota High School Clay Target leagues would face off in a 250-target showdown for the bragging rights of this inaugural event.

If you are not familiar with Sporting Clays, there are several throwers strategically placed out in front of the shooter where several clays come out from the throwers in several directions, which include one on the ground, the Bouncing Bunny, simulating the shots you might face in the field.

It had been some time since I had been on a Sporting Clays course and it did not take me long to remember why I had not pursued this sport, as it was not pretty, but it was enjoyable.

Also on Friday, we had an opportunity to attend the dedication of the James Meger Memorial Wildlife Area just down the road from Marshall. Pheasants Forever and more than a dozen other conservation groups and large donors made this Memorial Wildlife Management Area (WMA) possible.

The memorial honors the late James Meger, from the Marshall area who was a renowned wildlife artist. His artwork raised hundreds of thousands of dollars for wildlife habitat as well as conservation groups.

This WMA lies along a creek with a 155 acres of public access land located just a few miles northwest of his hometown, where the land will bear his name and have one of his works of art at its entrance.

Marshall, in Lyon County as well as this area of southwestern Minnesota actively promotes hunting and outdoor recreation. One will find numerous public hunting acres within 25 miles of Marshall, as there are 37 Walk-In Access areas totaling just less than 3,000 acres, 20 Waterfowl Production Areas with approximately 3,779 acres and 132 Wildlife Management Areas with another 24,407 acres of public access hunting land. In Lyon County alone, you will find 47 Wildlife Management Areas totaling 11,184 acres. All are open to public hunting.

As the 10:00 am start of the 2017 Minnesota pheasant season approached, we made our way out to one of the fields that we would hunt.  Approaching the drainage ditch and field, I talked with Arlyn about the land we would soon be hunting.  Arlyn indicated, “we have several areas with good habitat; this one has 10.8 acres of thick CRP, a shelterbelt and a drainage ditch running along the edge of one side of the property for a total of about 35 acres.”

As we made our way around the drainage ditch, several roosters cackled from the cornfields adjacent to the DeBruyckere’s land. 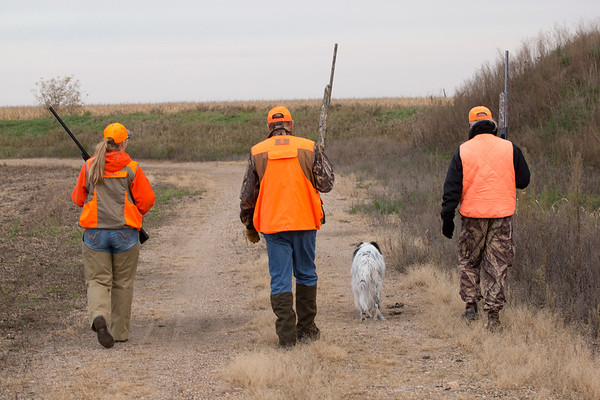 We worked our way along the property line towards a shelterbelt on the outside of the field and as we approached, we could hear more roosters announcing their presence from the cornfield on the neighbor’s property.

Jamie and I along with their hunting dog Jack would work the outside edge of the ten plus acres of thick CRP with Don and Arlyn making their way along the edge of the trees, Arlyn, a talented photographer wasn’t hunting, was there to photograph our hunt.

Making the turn coming out of the trees, Jamie Indicated, “He’s on something, he’s getting birdy” with Jamie and I moving in behind the dog.

Jack methodically worked his way through the thick CRP grass, stopped and then move ahead slowly trying to zero in on the bird.

We were about to the end of the field when Jack begun to really look serious, indicating the bird had stopped running, hunkered down and was about to burst from the thick cover.

As Jamie moved in on the dog, it erupted from the grass just in front of Jack’s nose. It was not one of the brightly colored roosters we had hoped for, but a hen.

After heaping praise on the dog, letting him know he had did what we had asked of him, we circled back deeper into the CRP, hoping to surprise any birds that slid off to the side while we were pursuing the hen. Don and Arlyn worked along the edge until we came to the end of the field where they slid to the outside of the shelterbelt with Jack working his way through the trees while Jamie and I covered the inside edge of the grass.

Approximately half way through, Jamie once again indicated, “you better be ready as he’s really birdy” as she could see by the way Jack had his nose to the ground and the way he was working that he was on a bird.

Shortly thereafter, on the other side of the trees a rooster cackled as it burst from the heavy cover, well out of range of Don’s twelve gauge as it flew off into the adjacent cornfield.

We hunted another small area, but to no avail as the birds had retreated to the safety of the unpicked cornfields and would be feeding there long after we departed for the noon luncheon at SMSU.

Un-harvested corn was our demise on the Minnesota Governor’s Hunt as it was the week of our Nebraska pheasant season opener.  Once the corn comes out, the tremendous habitat in the Marshall, area will be where the birds are and hunting in the area will pick up as during the August Roadside counts the area had a bird count of 25 to 49 birds per square mile.

Other teams fared better than we did with several groups who hunted in areas where the corn was out, getting into nice bunches of birds and being able to bag most of their limit.

It was an enjoyable hunt, which gave me the opportunity to get together with several old friends as well as meeting and making some new ones.

Habitat is the key to good pheasant numbers and with well over 31,000 acres of prime habitat on public hunting ground in the Marshall, Minnesota area, it will be the hot spot in the future for not only pheasant hunting but also other hunts as well.

Thanks to the Arlyn and Jamie DeBruyckere for allowing us to hunt with them, to Governor Mark Drayton, the Minnesota DNR, and all those folks from the Marshall, Minnesota that put together this fine event.