Bow-Fishing Has a lot of Followers 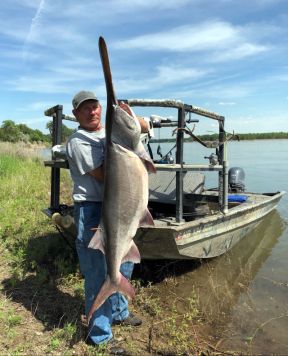 When I was a kid, growing up a block away from the Big Sioux River in Watertown, South Dakota, each spring, there was always the spring carp and buffalo runs which brought hundreds of these rough fish up river to spawn.

We speared them, which was fine, but we yearned to become bow-fisherman as those that took them with a bow, as far as we were concerned, were “Living the Dream” taking rough fish with archery gear.

Once again, our good friend, avid outdoorsmen and neighbor, Glenn Matteson came through, giving us a light fiberglass bow, that had a small crack in it

My brother A.J and I used the better part of our Dad, Cal’s electrical tape, a tuna can, a small piece of wood, short screws and some line and we were now bow fisherman.

In Watertown the fish that we and others took with our bows and spear were smoked and quite tasty, and what wasn’t used was properly disposed of.

There are some folks that may think bow fishing is just a blood sport, well that’s not true, as with each invasive fish they shoot, it  means there’s one less bighead, or silver carp to siphon off the zooplankton our native fish need and one less invasive species to spawn.

Our bodies of water, the rivers and lakes have been invaded by these fish, those fish that bow-fishing enthusiasts target, reducing the numbers of these invasive species.

These fish, aren’t native to the waters of the United States with many of these fish, being plankton feeders, create problems for our native game fish.

Included in these native fish, are the paddlefish which feeds entirely on plankton as well as all small game fish fry that feed on it before changing their diet to other fish.

These invasive species, which grow quickly are all Asian Carp, they include the Big Heads, Silver and Grass Carp.

The Big Head and Silver Carp continually feed throughout the day, swimming with their huge mouths open, siphoning off tons of zooplankton that native species need.

The Grass Carp, although not plankton feeders, have a veracious appetite, and as their name indicates feed on aquatic plants, reducing and destroying much of the aquatic vegetation, affecting the loss of habitat for our native species as well as our waterfowl population.

I’ve been fortunate, on numerous occasions, to spend time on the river bow-fishing with good friend, Team Outdoorsmen Production member and guide Marilyn Wiebelhaus, when my camera crew and I were along to see just how bow-fishing has changed.

He also was good enough to introduce my daughter Mieke Slaba and grandson Ted, from Wagner, South Dakota to the sport of paddlefishing.

Marlyn lives for the archery season, with bow fishing topping the list, he indicated” I’ve been bow-fishing since I was thirteen years old and love it and enjoy introducing others to the sport.”

He’s no rookie when it comes to bow-fishing and enjoys the pursuit of record fish, as he’s held twenty-four South Dakota and Nebraska state bowfishing records.

in the Missouri River, in both states, as long as you have a current fishing license, you’re allowed to bow-fish for rough fish year around, and once the first of July rolls around, archers can also take game fish, and if you’re lucky enough to draw one of the two states archery paddlefish tags, you can be on the water during that season testing your skills with a bow on paddlefish.

On several occasions, I’ve been in the boat when Marlyn arrowed the Nebraska bow-fishing record for smallmouth bass and I assisted Marlyn in landing a huge eighty-pound paddlefish with our bows.

Marlyn indicated, “when I first started bow-fishing on the Missouri, it was as if I had the entire river to myself, but as bow fishing became more popular, things have changed.

Now you very seldom see a john boat on the river that doesn’t have a bow fishing platform, an elevated deck or the brackets to add them to the boat quickly and when I’m on the river just bow-fishing, I see more bow-fishermen that anglers.

The boat that Marlyn’s uses for bow-fishing, a john boat, with a raised deck, with a long shaft trolling motor attached to the platform, used to slide up close to the fish, especially the Big Heads as it doesn’t take much to have them move the surface where they feed into the deeper water.

I asked him about the bow-fishing gear he uses, he in indicated “ I still use a recurve bow as it allows me to make quicker snap shots, with a heavy-duty reel, like the Zebco 808 or Brute closed faced spinning reel, spooled with heavy braided, up to 200 hundred pound test line, as Paddlefish can weigh over a hundred pounds and are very powerful fish as are the Big Heads, which grow quickly and may weigh up to forty plus pounds, and if you plan on bringing either of them to the boat or shoreline, it will require a reel’s drag that’s set properly, a strong back and strong arms in order to hold onto your bow as these hard charging fish plow through the water, using their powerful tails to put as much distance as possible between themselves and you.

Wiebelhaus believes “That in the last ten years, bow-fishing, which is one of the fastest growing sports has tripled.

The equipment used on many of the boats has also changed, with many bow-fishing boats with generators to power all the lights they have on board, allowing them to bow fish at night.”

Not only has the equipment on the boats changed, the archery equipment used, is now made especially for the bow-fisherman, including; the bow-fishing reels, the Drum, Spincast, & Retriever reels, more durable arrows, with safety slides which  if there is a malfunction, keeps the arrow from flying back at the archer and bow-fishing tips that help to secure the fish.

It could be hundreds of pounds, where the entrants would have so many fish in their boats that it wouldn’t take much sink them.

Marlyn is an excellent shot, when I was on the river with him, once he pulled his bow back and released, there were very few arrows that didn’t hit the fish.

There aren’t many days where Marlyn won’t be on the river, either guiding or bow-fishing on his own and several years ago because of his bow-fishing ability, he was approached about the possibility of getting the Wynot Area Veteran’s Memorial some rough fish for their Annual Fish Fry Fund Raiser, not only did he get them a few fish, he shot, rough cleaned and donated over 120 pounds of fish and has continued to do so each year.

He indicated, “I enjoy doing it as it’s for the Veterans and they deserve our respect and it’s just a little something I can do for them.”

Bow-fishing has definitely changed since my brother bow-fished from the bridge behind Larabees, the Highway 212 bridge, Sioux River Catwalk and we waded through the cattails and reeds.

It’s not an expensive sport, you can start with an inexpensive recurve bow, a heavier Zebco reel, like their 808, spooled with heavy line and as you get into it can, upgrade to the higher priced rigs.

It’ also a sport where you’re using your bow, sharpening your eye, giving you more confidence in your ability to use your bow and be ready for the next bow season, archery deer.

Gary Howey, Hartington, Neb is a former tournament angler, fishing & hunting guide, an award- winning writer, producer, and broadcaster, inducted into the “National Freshwater Fishing Hall of Fame” in 2017. He developed and was the Producer- Host of the Outdoorsmen Adventures television series for 23 years and is the Co-Host of the award-winning Outdoor Adventures radio show. If you’re looking for more outdoor information, check out garyhoweysoutdoors.com, outdoorsmenadventures.com and like Gary Howey’s Facebook page and watch the shows on the MIDCO Sports Network, News Channel Nebraska and on the Outdoor Channels www.MyOutdoorTV.com