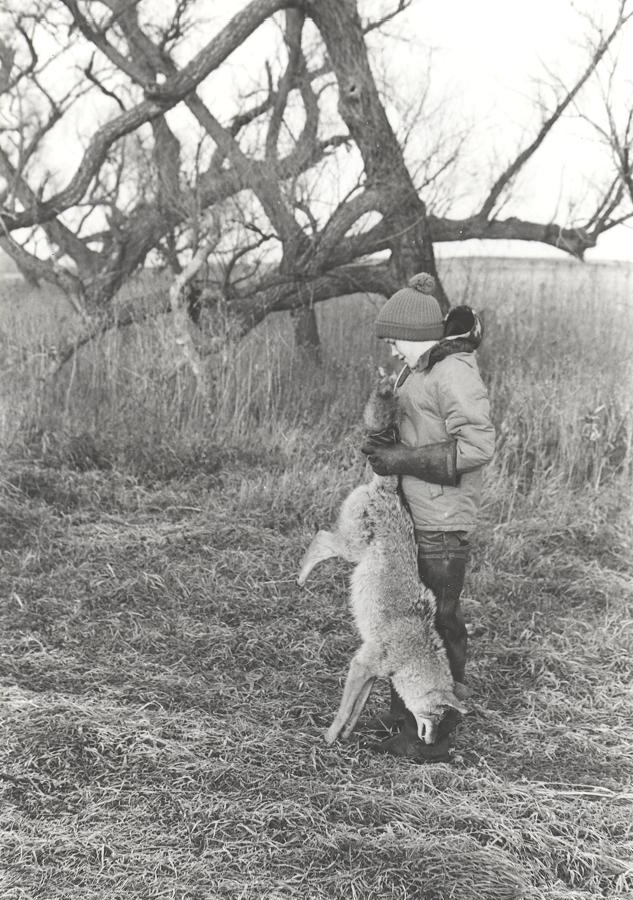 When fur prices were decent, many trappers and hunters, spent time in the field hunting and trapping predators, like authors son, Paul Howey who helped his dad remove this coyote from the predator population. (Gary Howey Photo)

Upland game populations, like other wildlife, runs in a cycle, good for a couple of years and then there’s a population drop, its Mother Nature’s way!

The main factor, in order to have good wildlife populations is habitat, and with farming methods the way they are, there are places where very little habitat is out there.

Where we used to hunt, shelter belts, creek bottoms, waterways, fences and fencerows rows are gone. as those that existed are now grazed by cattle.

The rows of corn and beans at one time contain some weeds are now clean as a whistle.

with habitat diminishing, upland game is forced to nest in ditches, in narrow grass strips next to small ponds and other small tracts of grass and weeds.

The habitat that’s left, those small tracts, are easy pickings for predators and they know it’s a place to find an easy meal.

The smaller tracts of cover, make it easy for the predators to search, to travel down making it easy to locate the nesting birds, killing them, eating the eggs and destroying that year’s hatch.

Predators, raccoons, skunks, fox and opossums are the worst, many of which can carry rabies,

as they’ve developed a taste for fresh eggs.

These predators have large litters, they become very efficient at finding and destroying nests.  These egg-sucking thieves are capable of cleaning out an entire field in short order.

When predator numbers are high, we’ll see more of the critters being forced out of the country, into the farms and into town looking for food.  Opossums and raccoons have become common sights around farms, feeding out of the dog or cat food dishes, coyotes and fox will come onto farm places, taking a pet, chicken or duck as they make easy meals.

When these furbearer’s numbers are high, Mother Nature has a way of taking care of coyotes, with the mange being a terrible way for an animal to die, as they literally scratch themselves to death.

When fur prices were high, with numerous acres of CRP and other habitat, pheasant numbers were up.

Since the price of furs has dropped to an all-time low, predator numbers skyrocketed and the birds and their nests became easy targets.

Trappers and hunters used to be able go out after raccoons and coyotes, pay for their gas and maybe make a few bucks, but with fur prices the way they are now, they’re lucky if they can pay for their ammunition.

When those individuals were trapping, hunting and calling, they were removing excess animals and predators that would have destroyed nests and killed nesting birds.

Studies by Delta Waterfowl, and other conservation groups, proved that in areas were predator numbers have been controlled, upland game and waterfowl production numbers increased.

While the hunters spend time in the field as they’re out hunting, they did their best to take care of any predators that they come across.

When fur prices were up, a huge number of the predators were taken out of the population, and now that they’ve hit rock bottom, the prices given for furs this season doesn’t amount to much.

Because of this, hunters this year, have come across more predators than they had past years.

Hunter’s dogs have tangled with skunks and big boar raccoon, with the skunk giving the dog a smelly education, and when tangling with a raccoon, our dogs could got beat up pretty bad.

They came out bruised and smelling pretty bad, but there were less egg thieves after the dog and the hunters finished with them.

We hunters, callers and trappers need to continue and increase taking of predators in order to balance things out.

Fur prices are low on raccoons and other nest raiders, with our eastern coyotes not worth as much as they were a couple of years back and by taking a few predators from the population, we’re helping to control the overpopulation of predators and save a few upland game birds and waterfowl nests.

While doing this, we’ll be able to pay for the few rounds of ammunition needed to dispatch the predators that are eliminating many of our ground nesting birds.

Gary Howey, Hartington, Nebraska is a former tournament angler, fishing & hunting guide, an award- winning writer, producer, photographer and broadcaster and in 2017 was inducted into the “National Freshwater Fishing Hall of Fame.”  Howey is also an award-winning writer, producer, broadcaster, former tournament angler, fishing and hunting guide and in 2017 inducted into the “National Freshwater Fishing Hall of Fame”.  He developed and was the Producer-Host for 23 years of his award winning gary Howey’s Outdoorsmen Adventures television series. He’s the Host of the award-winning Outdoor Adventures radio program carried on Classic Hits 106.3, ESPN Sports Radio 1570 in Southeastern South Dakota, KWYR Country 93 AM and Magic 93 FM in Central South Dakota, As well as on KCHE 92.1 FM in Northwest Iowa.  If you’re looking for more outdoor information, check out www.GaryHowey’soutdoors.com , and www.outdoorsmenadventures.com, with more information on these Facebook pages, Gary Howey, Gary E Howey, Outdoor Adventure Radio, Team Outdoorsmen Productions.