The Tom gobbled once as he made his way west out of the field and I knew it was going to be a tough hunt as it was the last day of the Nebraska Spring turkey season and his harem of hens were with him.

In Nebraska, the turkeys began mating before the April 26 Nebraska opener and it was on May 31, the last day of the season.  This wasn’t our first trip as Team Outdoorsmen Adventures Member Josh Anderson, Hartington and I had been out several times, only to return home empty handed.

It had been a good season for both of us as Josh had three tags, filling all three. On two of them, I had the opportunity to be along, filming his first archery turkey hunt as well as his  shotgun hunt, while he had gone out and called in his third bird.

It was a tough spring to hunt, as when it wasn’t raining, it was windy, so calling birds was tough. Not that it’s impossible, but when you’re hunting and have a camera along, moisture and winds don’t go well when bringing along camera equipment.

My first bird came when I was scouting for the next day’s filming,  when I stumbled into a flock of turkeys, with several big Gobblers. I couldn’t help myself and called one in, allowed him to strut around my decoy a bit and then knocked him down.

Josh and I had planned several different trips, but we’re beaten back by rain and the horrendous winds we’ve had this spring. When we did make it out, our calls must have not sounded sweet enough for the Gobblers, as they refused to leave their hens and come our way.

When it’s the last few hours of the last day of the season, things change and we decided in order to film the show and fill the tag we may have to change our tactics. This late in the season, if they wouldn’t come to us we were going to have to go to them.

Our first set up on the final day required a good quarter mile hike toting our decoys, shotgun, camera and turkey fan, as we made our way to a thick shelterbelt.  Once there, we would need to get through it quietly to where we had first spotted the birds. As we came to the north side of the trees, we hunkered down and glassed the area, seeing no birds; I gave a soft hen yelp. A resounding gobble came from behind us on the side we had just come through and while making our way through the chest high grass, we must have bypassed the bird.

Not wanting to give up on the bird, I’d call, and if there were no response, pause a minute or two before Josh would give it a go. One gobble was all we could get from the bird and he seemed happy to stay right where he was.

On the outside of the trees was some more tall grass, so seeing very far out in front of us was impossible. I motioned to Josh that I was going to move up to the fence line along the edge of the alfalfa field and that he should follow.

We managed to move a short distance to the fence line without making too much racket and once we were settled in, glassed the field. Off to our right we could see one good bird and several hens, but they were heading away from us. I called to the gobbler, getting his attention, with his red head and neck extending out as far as possible, hoping to see the bird that was calling to him.

He continued to move away from us, went under the fence as he walked away and with nothing but open ground between us, we had to wait for the gobbler and hens to disappear in a low spot in the alfalfa field.

It looked like this would be another one of those days, where we would see gobblers, but couldn’t get to them.

We hashed it over, trying to figure how we could move over 200 yards of open ground without being seen. The only option would be when the birds moved down into a low spot in the field and then low crawling through the alfalfa to get within shotgun range. At my age, low crawling isn’t something I enjoy, in fact, I didn’t enjoy it when I was younger in the Army in Viet Nam.

The crawl through the alfalfa wouldn’t be all that tough if we weren’t lugging all the extra gear, but desperate times call for desperate methods. With Josh leading the way using his turkey fan to hide himself and the camera, with the hen decoy out in front of me, we being the slow crawl trying to get close enough to use the fan and decoy to bribe the gobbler away from his harem.

Slowly but surely, we would gaining a few yards in their direction, where we would glass the area ahead of us and then crawl again. We were both sure it would be a matter of minutes before the gobbler or one of his hens spotted us. 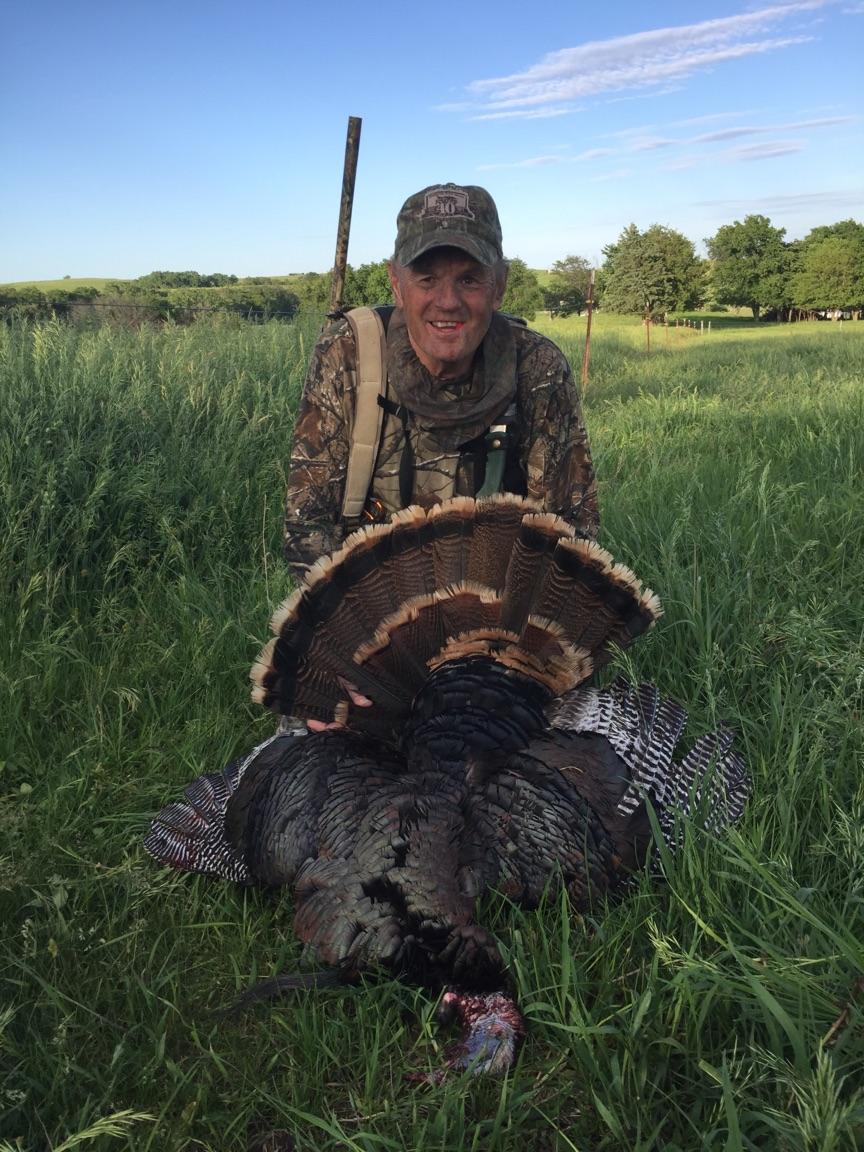 Finally reaching the ridge line above the swale the turkeys were in, Josh stuck his fan in the ground, with my decoy setting right beside it, while I lay flat on the ground, my shotgun in front, protruding just under the decoys body.

Well, it was now or never as I made a soft yelp and purr with my diaphragm call, as before, nothing, dead silence, then Josh indicated, “He’s coming”. I spotted one bird off to our left, but it appeared as if he wasn’t the least bit interested.

Then it appeared, the top of a gobblers fan straight out in front of us as a big mature gobbler came in silently, moving closer with each step, his eyes glued on the decoy in front of me.

This was it, the last shot I had at filling my second 2016 tag and it was down to almost the last hour. I raised my shotgun, took aim, and gave a warning putt, with the gobbler came out of full strut, bringing his head up as he looked for the danger,  I pulled the trigger, sending the Hornady Turkey six shot his way. The bird reared backwards wings flapping as he bounced around on the ground.

I was up quickly, making my way out towards the bird as Josh said, “you have got to be kidding me, I would have never bet that would have worked”.  It was hard to believe that two hunters could belly crawl a good two hundred yards through newly planted short growth alfalfa to get to the bird, draw it away from his harem and put him down that late in the game.

To both of our surprise, it had worked, with the footage in the can and the tag on the bird as our last day of the season, down to the wire, our spring turkey hunting came to a close.

← Prev: Walleyes elude us on Lewis and Clark Lake By Larry Myhre Next: 6 Tips for Drought Proofing Food Plots →