It’s December, when in a somewhat normal year there’s good ice in northern South Dakota and Minnesota. Well, I’d have to say that this isn’t even close to a normal year. In our area the last week of November and first week of December, we’ve had very few cold nighttime temperatures.

Don’t despair, as it can happen quickly when temperatures drop below zero and even colder at night, as ice can build fast once the temperatures begin to drop.

As I’ve mentioned in previous columns, don’t get too anxious to get on the ice, make sure there’s plenty of ice to support everything you’re bringing with you on the ice.

Once the ice builds, early season ice fishing can be the most successful time for you to be out there, as the fish are still somewhat active and not into their full winter mode.

Years ago, the thinking was that once the ice covered the lakes and ponds, all fish dropped to the bottom to be comfortable and pretty much hung there most of the winter.

Since the invention of Vexilar locators, we’ve learned a whole lot about where the fish will be located throughout the winter. We now know that, especially during first ice, fish are moving not just vertically, but also horizontally.

The Vexilar locators have made it much easier to locate the fish, the depth they’re holding, the depths our baits are and to see if we still have bait on our lures.

Now that we’ve this information and have these locators, where do we begin to start looking for fish during the early ice-fishing season. 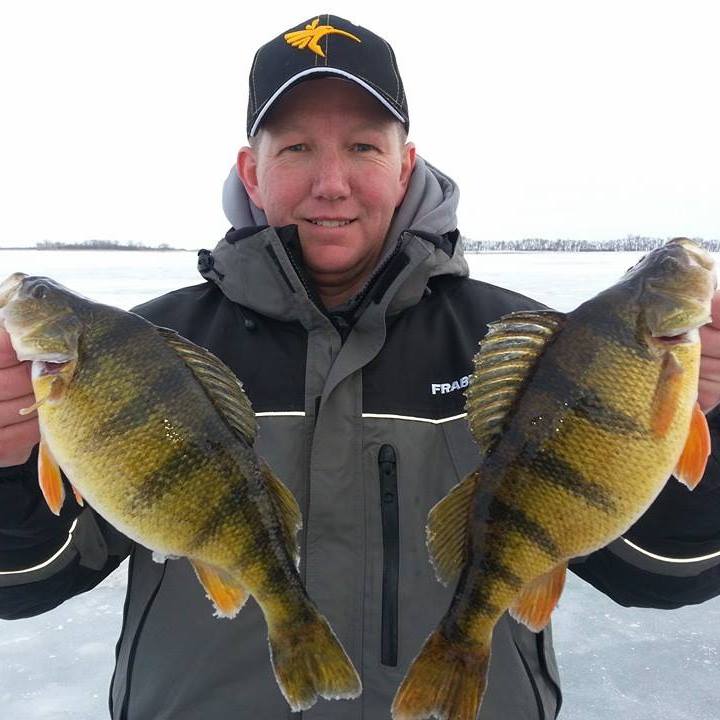 Team Outdoorsmen Adventures member Eric Brandreit, Big Stone City, S.D., a true believer in the run and gun method with some of the perch taken while fishing out of his Frabill Citadel ice shelter.

I generally start in approximately the same area where the fish located in the late fall as many times, they’ll not have moved far and if they have it could be close by to the next depth change.

If we locate rushes protruding through the ice, we always try to start fishing there, drilling our holes where we feel the rushes end.

My partner and I double down when we hit the ice during the early season, with one of us running the Jiffy auger cutting a series of holes out from the rushes and the other following behind with the Vexilar checking the depth and if there are any fishing showing under the ice. Once we get an idea as to what depth the fish are at, we concentrate on that area.

We both have our favorite lures, which in many cases are different, so we start using different baits and changing until we find one the fish like.

For panfish, I like to start fishing with a Hali jig, which is no more than a small spoon with a gold chain and small hook hanging below it. I’ll tip it with a wax worm, working it just above the depth the fish are using.

Fish have excellent vision upward and little or no below, that’s where I want my bait, up above him so it’s the fish can locate it.

I’ll drop it down to the depth the fish are using and then twitch it to get the pinfish’s attention, bring it up a ways and if they start to move up, hold it steady to see if they’ll hit it. If they lose attention, I’ll start all over and now, twitch it a bit more to see if the fish reacts.

Once I have him moving towards the bait, I’ll pull it up and if things are working right, have the fish follow and then keep the bait motionless for a second, if the fish doesn’t react jiggle it just a little, that’s when most bites occur.

If the fish looses interest, I start the whole process over, not spending a whole lot of time on one hole, as there’s a lot of fish in the body of water we’re fishing and to stay to long and die on one spot isn’t for me.

We always have a livebait rig down with minnows; the size depends on what we’re fishing for, and if its crappies, we’ll go with little minnows and larger ones for walleyes.

My fishing partner, when fishing for walleyes, generally begins fishing with bigger baits, one to draw the fish to where he’s fishing, it might be something like a Jiggin Rap or a Darter.

We had a good friend who even went as far to drop down a larger spearing decoy to get the attention of the fish, following it up with one of his favorite baits and would catch a lot of fish doing it.

The key to catching good numbers of fish is to not spend all your time in one place when the bite slows, waiting for the bite to turn on. I’ve seen some anglers hit a spot, spending the better part of a day there, because they’d caught fish there in the past.  Fish, even in the winter move around, it may be vertical, but it could be to the other side of the pond or lake.

We move a lot when we’re ice fishing, running and gunning, never setting on a hole for very long, we’re always looking for fish, which has worked well for us as the portable gear, a sled, auger and electronics helps us to keep finding some fish.

As with any type of fishing, there are days when it seems you can’t do anything wrong, then there are others where the opposite is true.

One thing is for sure, you won’t know either way if you stay at home, to me and those I ice fish with, being outside with others who enjoy the outdoors as much as I do, makes it a good day even when we don’t catch a lot of fish!