Hunting fall turkeys can be an experience By Larry Myhre

Sometimes, when you are turkey hunting, you get caught with your pants down.

But when three birds burst out of cover in formation, 100 yards away, and you are standing in a harvested alfalfa field with only three-inch high vegetation to conceal you, it certainly feels that way.

I was somewhere in southeast Nebraska. I no longer remember exactly where. Gary Howey, Hartington, Nebraska, and I were hunting the fall turkey season.

We were walking along the edge of an alfalfa field abutting a barbed wire fence along which the summer’s weed growth had grown high. Gary was close to cover, but I had wandered out into the field a ways, like a prima donna on parade.

We hiked along. Me clutching my 12 gauge and sending out plaintive yelps with my diaphragm call from time to time. Gary, carrying the camera, walking behind.

I had just finished a series, when the three birds stepped into the field. I dropped like I had been hit by a rock, and I presumed Howey had done the same.

Funny thing, though. The turkeys didn’t seem to notice us. They kept walking in, and I kept calling. Chalk it up to good camo, I guess.

At 20 yards I decided I was not going to shoot. These were young birds, not that it made any difference to me in a fall season, but I wanted to see just how close I could entice them. And, we had only been out a couple of hours. I hate to end a hunt too early, although that has come back to bite me from time to time.

They came in so close I could have almost grabbed one, although that would have been a very bad idea. They were looking me over like I was some kind of laboratory specimen, their long necks reaching forward and their black, beady eyes piercing like tiny lasers. Before long they became suspicious and began “putting” before running off.

I rolled over laughing, and Gary did the same. 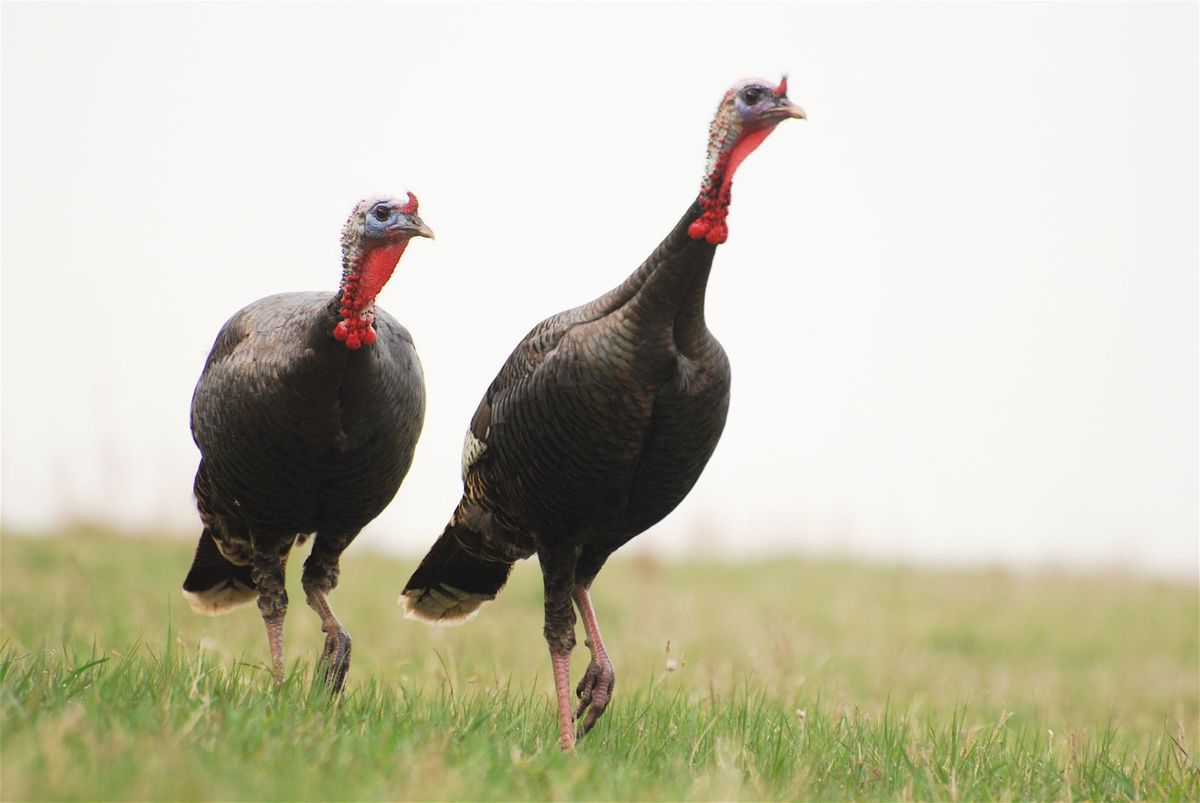 These young Jakes were photographed during a spring hunt. They are curious fellows and almost walked right over me while I lay in full camo in an open field, much like those in the story when I didn’t have a camera.

I haven’t done a lot of fall turkey hunting. The fishing is always too good. And the fall hunt is a lot different than in the spring.

Springtime hunts are gobblers only and the breeding season factors into the hunt. Gobblers respond well to calling in the spring. In the fall, both hens and gobblers are fair game and calling plays a lesser role. I’d venture that most fall turkeys are “bushwhacked” rather than called in.

However, here’s the thing. Fall turkeys, both hens, poults, jakes and toms can be called to your position. And, in the case of hens, it is much easier than in the spring.

If you do any researching on how to hunt fall turkeys, you will find that the recommended method is for you to locate a flock of turkeys, sneak up on them and suddenly burst into their midst and scare them into the four directions. Then sit down and began calling because the flock will want to regroup.

However, spooking a flock of turkeys like that is easier said than done. Unless you are a track star the likes of Usain Bolt, you will probably end up sending the birds running away from you, all in the same direction. And if they are still grouped up, they won’t come back.

In the fall, turkeys group up. Hens and poults usually consist of one grouping. Adult toms, another. Jakes usually run together as well. Sometimes they will all roost together and this is particularly true of the hybrids, which makes up most of eastern Nebraska turkeys, and Merriams, which are found farther west in the state.

And that was the case on this hunt.

The landowner had told us where the turkeys roosted. Naturally, it was just over the property line on an adjacent farm. But, we were told, at least some of the estimated 200 turkeys roosting here would cross the fence and come get a drink from the farm pond where we concealed ourselves in the dark and waited.

As a pink blush began to spread along the eastern horizon, the turkeys began to wake up. At first it was just a number of low clucks and purrs, but as the sky lightened up the sounds began escalating into a low roar.

We had heard nothing like this before. They stayed in the trees longer than I would have thought before they began flying down. The roost trees were in the back of a ravine and we could not see the birds, only hear them.

But once on the ground they began filtering out in a steady stream of turkeys and, naturally, they were headed away from us. It took better than half hour for all of them to leave the roost and not one of them crossed the fence onto our property.

We hunted the rest of the day without success and decided to spend the evening fishing a farm pond where we caught some nice bluegills and bass.

But the next morning found us back at the dam. And the turkeys were there, clucking and purring in the dark and hitting the ground and running away at daybreak, a repeat of the morning before.

It was more out of desperation than anything else, but I began a loud series of “kee kee run” calls.

If there is one call you need to learn for fall turkey hunting it is the “kee kee run.”

That is the call the mother hen uses to call her poults back to her. It is also the call the poults use to find their mother. At any rate it is a call that can mean, “Hey, I’m lost. Help me.”

The “key key run” is a series of, I’d guess I’d call them “peeps,” which eventually break over into a yelp or two.

I hadn’t hit the third series when I noticed a hen, nearly 300 yards away, turn and begin running back toward us. I kept hammering out the call and the hen kept running. Soon she was joined by a few others.

I had my Thanksgiving bird. And we had a turkey hunting experience the likes of which we will never see again. That’s the kind of inspiration you need to keep rolling out of a warm bed at four o’clock in the morning, spring or fall.