Drifting for Cats on the Missouri River By Gary Howey

The Blue catfish, one of the largest catfish in North America, and aren’t caught on rod and reel often, but one Midwesterner, from South Dakota has it figured out.

Pat Carter of Elk Point, South Dakota, director of the Cat Attack tournaments has been catching these elusive Blue catfish on the Missouri River on a regular basis.

During his Sioux City tournaments, contestants from Kansas and other states had used the drifting or slipping method t tale some big Blues and he had perfected the presentation to be able to cat Blues on most of his trips on the river.

Team Outdoorsmen Adventures Member Larry Myhre and I had an opportunity to spend some time on the river with him a few weeks ago and the method he uses isn’t what we would call a traditional method for catching catfish.

Fishing in the current associated with the Missouri River is different from fishing in the smaller rivers catfish are known to haunt. Some anglers anchor above the deeper holes using sliding sinkers with hooks baited with live or cutbait, waiting for the catfish to come to them.

Not Carter as he drifts for them, keeping his boat at the right angle, allowing his partners and him slowly drift or slip along with the current, keeping their baits running right along the bottom. 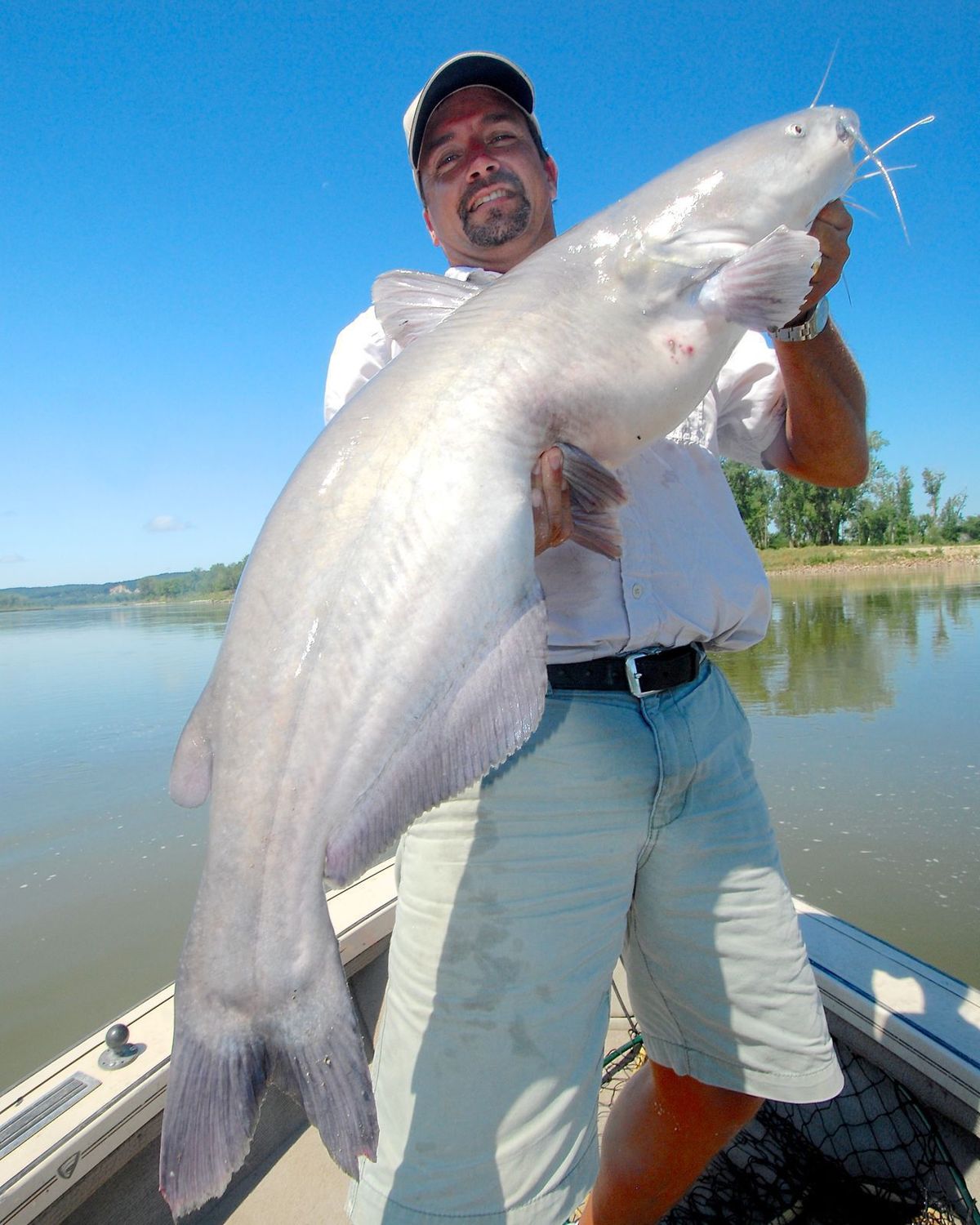 His rigs consist of 60# braided line with a three-way swivel, a 20# dropper line with a 2 ounce sinker, a 4′ leader with an 8/O Kahle hook baited with Creek Chubs or Shad cutbait.

As the boat drifts with the current, he slowly bounces the sinker on the dropper line on the bottom, win anticipation of the bite.

Before meeting Larry and I at the boat dock near Sloan, Pat had gotten fresh shad and some Creek Chubs, allowing us to get our baits into the water shortly after launching the boat.

Larry and I were both using circle hooks while Pat would use his Kahle hooks, as we they allowed us to pack a lot of cut bait and had good success hooking catfish on previous trips.

Pat removed the bait, smelly Shad and Creek Chubs from his cooler, dicing them up into strips that we worked onto our hooks, packing the pieces on so tightly that the point of the hook verily protruded from the bait.

The trip didn’t start out quickly as we drifted quite a ways south before Pat had his first bite, it wasn’t the bone jarring bite I’d expect from a big catfish, and more like a pecking bite a smaller fish might do as it tried to pull pieces from the large hook.

Whatever was doing it escaped without harm as when pat reared back to set the hook, the fish was gone?

A half-hour after the first bite, Pat again had something pecking at his bait; he patiently waited for the fish to grab onto the bait and then set the hook hard.

Immediately the fish took off, peeling his 60-pound line from the reel, charging hard towards the bottom and away from the boat.

Pat, in no hurry, let the fish run, fighting it with his heavy rod, first on one side of the boat and then to the other. As his three way swivel came to the surface, I thought the fight was about over, the fish did not as it tore off more line, once again testing the drag on Pat’s reel.

Twenty minutes later as Pat hoisted the fish towards the net, a 24-pound Blue catfish slid into the net. This would be the second fish that size pat had put in his boat that week, but not the biggest Blue catfish caught in his boat as one of his trips on the river, his partner had landed a 57-pound Blue.

After a few quick pictures and footage of the fish, Pat gently slid the fish back into the water where it swam off.

We would continue our drift making our way south drifting about 2-2 1/2 MPH as we worked in and through the deeper water.

Pat feels that in the fall, once the water temperatures in the Sioux City area begin to change, Blue catfish have a tendency to move south in search of the warmer water.

Not long after Pat’s fish was released, Larry had a bite, about the same type of bite Pat had, but when he set the hook, it was obvious he hadn’t hooked into a Blue, it was one of the fish’s smaller cousins a channel catfish.

For its size, the fish put up a good fight, but quickly came to the boat and like the big Blue was released.

As the afternoon continued on, we all had bites, but as we set the hook found nothing there.

Then, I felt the pecking as a fish worked my bait, I waited patiently. I was hoping another big fish would soon be at the end of the line, but when I set the hook, I knew that the fish on the line again was another channel cat, one that would prove to be even smaller than the one Larry had brought to the boat.

It was a good afternoon, we didn’t catch a great number of catfish, but the one Pat tied into made it an excellent trip as I learned a new method for going after catfish in the swift current of the Missouri.

It will be a method; I will try whenever I’m fishing for catfish on the Missouri River, as it’s one that works, allowing anglers to take Blue catfish on rod & reel.

← Prev: Hunting fall turkeys can be an experience By Larry Myhre Next: Pheasant hunters expect a good season By Larry myhre →