I’m a “Fan” of Turkey Hunting By Gary Howey

It was twelve or so years ago, when I suggested to my  hunting partner Larry Myhre that we should come up with some type of turkey fan that would help us sneak up on Gobblers. He thought it was a good idea, but said it sounded like work and he was looking for less.

That next spring, I took one of my turkey fans that I had spread out and dried into the field with me, didn’t have much luck with it and abandoned the idea.

Since then, I’ve used then every spring and have fooled more long beards with them than I had every thought possible.

Several years ago, my Outdoor Adventures radio co-host Simon Fuller was operating the camera as I called in a group of young birds using a combination of my calls and the fan. They five of them came into my decoys feeling brave with all of the birds fanned out as they approached my jake and hen decoys.

As they surrounded my jake decoy, I made the raspy call of an old gobbler, raised the fan and all five of the birds about dirtied themselves as they did their best to get away from my fan.

On the same hunt, using my fan and calling, I called a hen a long ways and when she came within sight of my decoys lost interest and started to move away. However, when I brought my fan back up, she came within arm’s reach of me and refused to leave, I think she fell in love with my turkey fan. I finally had to chase her away as she was messing up my turkey hunting.

Later that day as we were heading back towards town with my Honda Pioneer, we spooked a big Tom that took off running across a pasture. Down the road a ways, we spotted two gobblers and a hen bout a 1/2 mile away, in order for the birds to hear and see the fan, we crawled through the pasture, with my fan out in front of us, up to the fence line and started calling. I watched the birds with my binoculars and each time I called, they would gobble but not leave the hen.

Simon had the camera zeroed in on them as I brought the fan up high and worked it from side to side, hoping to get the birds attention, but to no avail. Suddenly I saw the gobbler, the bird we had spooked as we came in, on the other side of the gobblers and hen and each time I raised the fan, he would head in our direction.

He ran right past the other birds and came in our direction and each time the fan came up would strut and gobble, coming closer all the time.

When I said “the birds coming in”, Simon who was still locked on the two gobblers and hen disagreed with me and wasn’t sure what I was talking about. By this time the bird was out a 100 yards or so when I told Simon “can you hold this fan up as I can’t shoot and run it at the same time” that he looked my way and spotted the gobbler out in front of me. 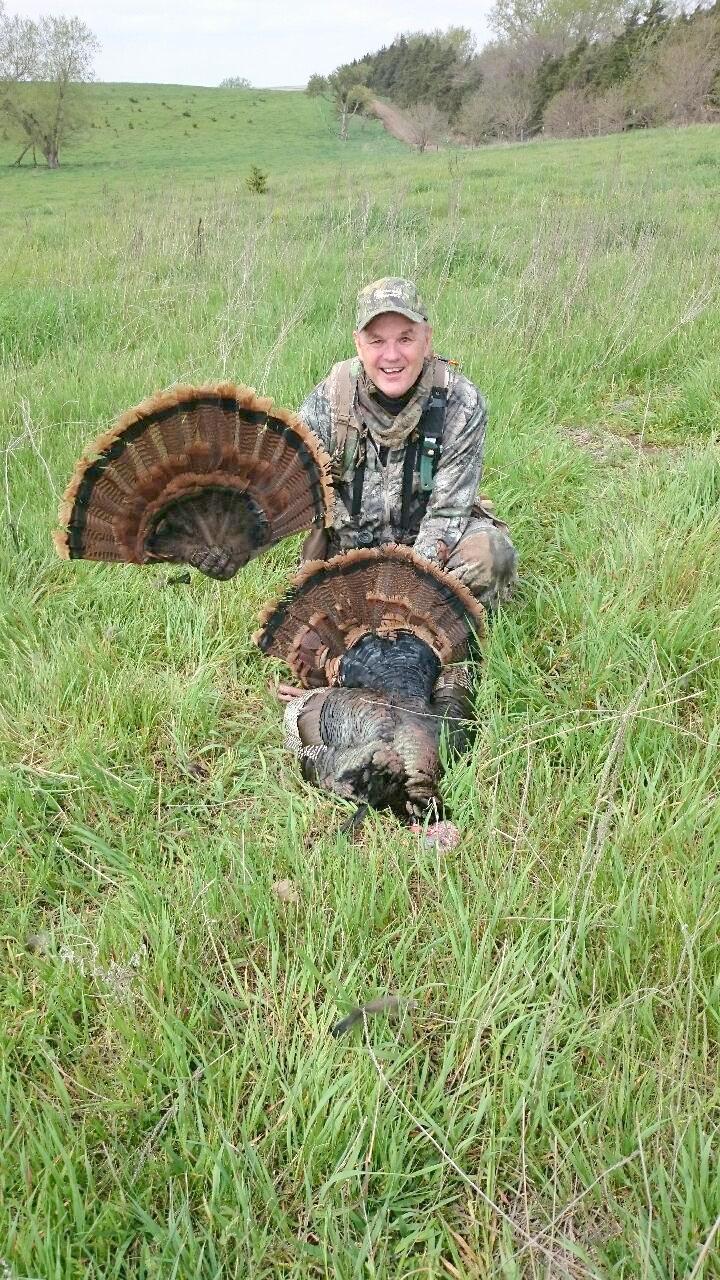 Author with one of the many Gobblers he’s taken using a turkey fan.

As he took the fan, I came up on the strutting bird, now with 15 yards of us, clicked off the safety, gave a warning putt, stopping the bird right in our face and fired, the load hit him hard, flipping him completely over.

Later that season, I had an opportunity to take a young man from town out hunting and as we came over the hill, we spotted a Gobbler and hens a good half mile south of us. The only problem was that we had to cover a lot of ground to get to them and with the open terrain, I wasn’t sure we could make the stalk.

Using the fan out in of my face and the young hunter hunkered down behind me we made the stalk, stopping wherever there was cover to call and use the fan. As we neared the end of the fence line coming into the open field where the birds were, we slid in along the fence line and started calling.

Within a couple of minutes, a big gobbler walked around the corner, spotted us and tried to run, only to be brought down by a shotgun blasts.

Each spring when I tag a bird, I spread and dry out the gobblers fan and always have a fresh one waiting in case the one I carry in my vest gets beat up.

using a fan is easy, all you need to do if you want to get closer to turkeys is to make sure you’re wearing clothing that blends in with the terrain, get as low as you can and hold the turkey fan in front of you and move towards the birds. If you’re set up and calling turkeys simply raise the fan from time to time, move it back and forth with your hand and keep your eyes open.  If a gobbler sees the fan and hasn’t spotted you, he’ll head your way, intent on kicking the tail feathers out of the intruder that dared come into his territory.

Fanning a big gobbler is a rush as they come in spitting mad as they think another gobbler is cutting in on their territory and are watching the fan and nothing else.

The fan allows you to get close to the birds and once you’re set up, by working the fan back and forth like a strutting gobbler will bring those weary birds right to you.

If you haven’t tried fanning in the spring, I’d suggest it as it adds a lot of excitement to your hunt and goes a long ways to help fill your tag.