In the Heart of the Sandhills, Valentine, NE. By Gary Howey

When most folks think of Valentine, they think about the excellent canoeing and tubing down the Niobrara River. Among the other attractions and outdoor opportunities found in the Valentine area, include several waterfalls, including; Nebraska’s tallest waterfall, Smith falls and the Snake River falls. Other attractions all located within a short, drive from Valentine, include the McKelvie National Forest, the Valentine National Migratory Bird Refuge, Fort Niobrara National Wildlife and Valentine State Fish Hatchery.

On this trip, we visit another of the excellent vacation and fishing destinations in the area,  as we will be fishing and filming on Merritt Reservoir with Team Outdoorsmen Adventures member Steve Isom of Valentine.

Merritt Reservoir, a three thousand acre reservoir is located twenty-six miles southwest of Valentine; the reservoir holds excellent populations of walleye, smallmouth bass, crappies, and channel catfish and is one of the few lakes in Nebraska with Muskie.

Merritt is also the home of the Nebraska record Muskellunge (Muskie), the state record fish came from the reservoir in 1992, the a fifty-two inch fish weighed in at 41 pounds 8 ounces.

Steve, who fishes the reservoir often, had been doing quite well as on a recent trip, one of the anglers in his boat landed a nine and one half pound walleye.

We awoke at 4:00 am to heavy rain, wind and lightning, which are not ideal weather conditions for fishing. At 4:10, our rooms at the Traveler’s Inn Motel (www.tradewindslodge.com) our headquarters for this trip shook. Later that day, the shaking we experienced early that morning turned out to be an earthquake registering 3.3 on the Richter scale. Not something, which would keep us off the water just another that, could make fishing tough. 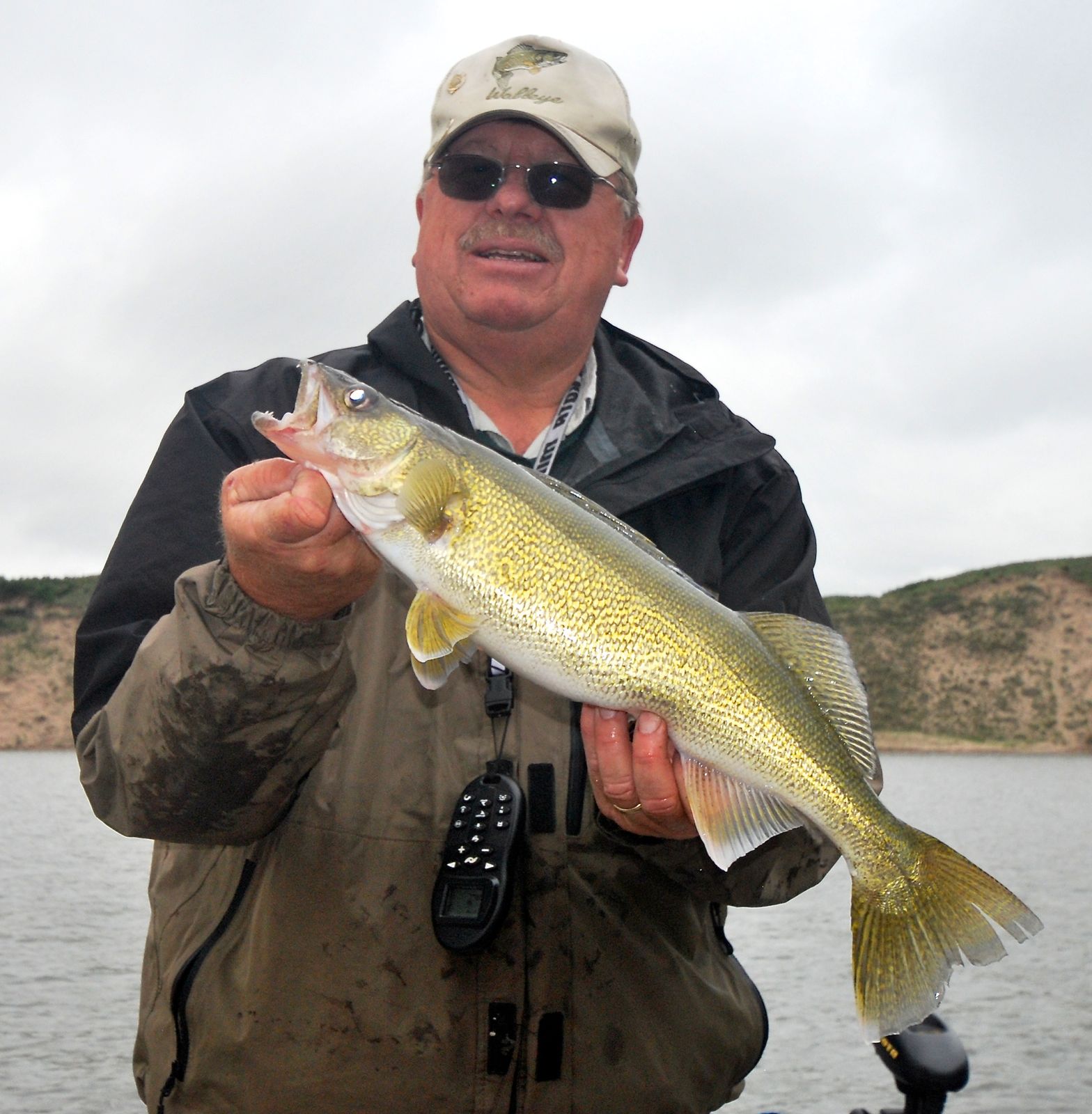 As the rain subsided at 5:30 am we headed for the dam, hoping the strange weather conditions we had encountered had not jinxed us. We started casting along the face of the dam, where the Alewife was stacked up. Alewife, the main forage fish on the lake for walleyes, white bass and the pelicans, all of which were along the dam feeding on these fish.

We started casting swim baits and crankbaits in towards standing vegetation standing in the shallow water where we took several small walleyes, a few Alewife’s and white bass before I set the hook on a larger fish, a walleye, one measuring seventeen inches.

We worked the face of the dam hard; managing to land numerous walleye is the fifteen-inch size as well as white bass in the three-pound range.

As the bite slowed, we headed for the Boardman Creek to probe along the edge of the arrowhead plants growing in the water along the shoreline.

We pulled into the area where other anglers were anchored, using slip bobber rigs, drifting them along the edge weed beds.

Steve would keep the boat moving, using the trolling motor to work the outside edge of the weed beds, allowing us to fish along the drop off into deeper water with our livebait rigs baited with leeches and crawlers while he cast his swimbait into the weed-beds.

The smaller walleyes holding along the edge of the weed-beds were very aggressive, with the large fish being no shows.

Steve’s swimbait splashed down in between two masses of weeds, raising his rod, he cranked hard on the handle working his bait back through the weeds. Suddenly, his rod was bent forward by a savage strike; he quickly put pressure on the fish trying to keep it from burying in the weeds. Slowly but surely, he gained on the fish, pulling it out into the open water in the direction of the boat.

Knowing this was a bigger fish, I stood ready with the net, and as it surfaced alongside the boat, I slid the net in under the fish, bringing the twenty-inch fish, the largest of the day into the boat.

We moved several times trying to locate larger fish, as we changed depth several times, moving to different locations on the reservoir where the only larger fish we found were white bass and drum, the larger walleyes just weren’t in the mood.

The fantastic big fish bite, which Merritt is known for, did not happen as we finished out the day with two good walleyes, seventeen and twenty-one inches, numerous white bass in the two to three pounds range and a lot of smaller fish.

Not only is Merritt a great place to fish, it’s also the place to go if you into boating and camping, as you will find both primitive and modern overnight facilities areas on Merritt along with five boat docks and two fish cleaning stations.

There is a dump station located at the Main Area, southeast of the dam as well. Cedar Bay Campground has twenty-eight electric sites and eighteen standard sites without electricity. In the Beed’s Landing area, there are twenty electric sites and eleven standard campsites without electricity, these along with one hundred forty tent sites are found throughout the lake as well as over two hundred picnic tables and eight picnic shelters make Merritt an ideal place for camping.

The Sandhills of Nebraska, with Merritt and its great fisheries are just a small part of what this part of the state has to offer. Down the road, you can count on our crew returning to the area, where once again we will enjoy all Cherry County has to offer and once again to test the waters of this Sandhills Reservoir.

More information on all that’s going on in the Valentine area you can contact the Valentine Chamber at 800-658-4024 or on line at visitvalentine.org