HUBBARD, Neb. | The tiny red and white bobber tipped over on its side and then zoomed under the water as yet another bluegill inhaled my 1/64th-ounce jig.

“I just love the way bluegills fight,” I told my boat partner, Gary Howey of Hartington, Neb., “If they weighed six pounds I don’t think you would ever land one.”

This little guy was exhibiting the trademark fight of his kind. Bluegills turn their broad sides to the pressure of the line and somehow swim in tight circles which can test the mettle of your 4-pound-test line.

We were fishing Kramper Lake, the centerpiece of the new Danish Alps State Recreation Area just a mile or so southeast of Hubbard, Neb.

The lake opened to fishing last July after heavy rains the previous year filled the 226-acre reservoir. The lake was first stocked in 2012 and has had two more stockings since then.

Well-stocked with bass, bluegill, crappie, walleye and channel catfish, the lake is tucked into over 500 acres of parkland featuring more than 70 gravel pads for RVs and 22 tent-camping sites. Camp sites are complete with 30 and 50 amp electricity hookups, water, shower houses and equestrian facilities. A picnic table and fire ring is located at each campsite.

Our boat was tied up to one of the many trees which line the now submerged Jones Creek. Although many of the trees are in over 30 feet of water, we were taking bluegills within a foot or two of the surface. Sunken trees attract most gamefish, including walleyes. We were told that a 17-inch walleye had been caught on a crankbait in the trees the week before.

The trees are only part of the ample structure built into the lake. Before it filled, several brush piles, shoals, rock piles, reefs and other structures were installed. Coordinates are provided in a brochure which will enable anglers to find them with their GPS units.

All things considered, this could be one of the best small-reservoir fishing sites anywhere.

We had begun the day working the weedline looking for bluegills, largemouth and crappies.

With surface water temperatures hovering in the 80-degree range, I eased the boat along the shaded sides of the weeds. 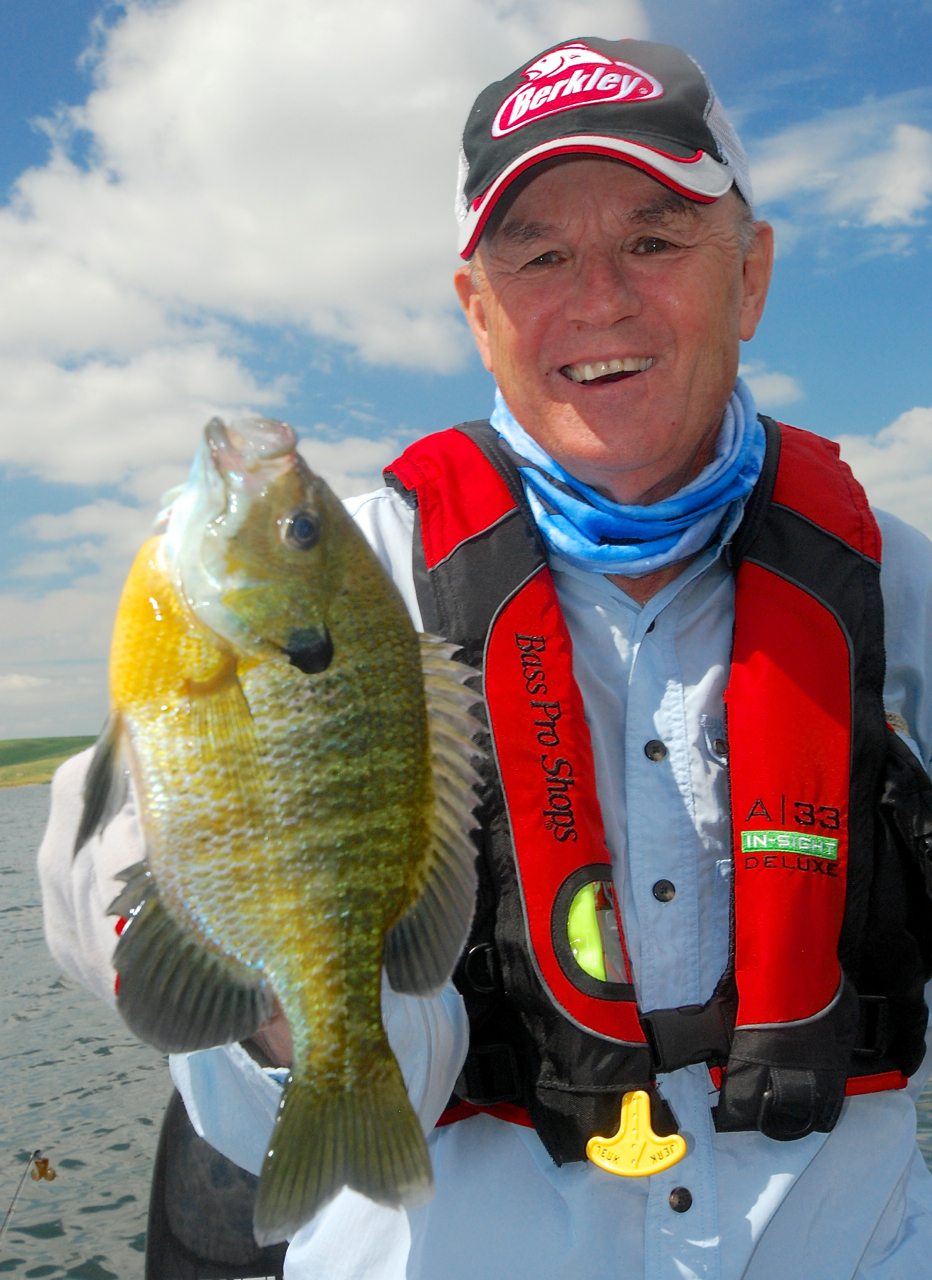 I was surprised to learn that weeds grow as deep as 14 or 15 feet on many areas of this lake. That tells me that the water clarity is super and that the three water quality basins and the associated

wetland complex are doing their job of settling out any runoff silt.

We took bluegills and bass off the weeds, but only one crappie. Later as I was negotiating the boat under the 5 mph no wake limit I noticed a lot of suspended fish about 12 feet down.

“Those are probably crappies,” I said. “I’ve seen them suspend like that in other small reservoirs during the summer.”

The recreation area is a $15 million dollar project of the Papio-Missouri River Natural Resources District. It is managed by the Nebraska Game and Parks Commission under a cooperative agreement. Other conservation agencies also partnered in the project.

The Danish Alps State Recreation Area is part of a comprehensive waterside plan which will provide flood and erosion control and other benefits in the 20,316-acre Pigeon/Jones Creek Watershed in Dakota County.

The area takes its name from the early Danish settlers who populated the area in the late 1800s. The surrounding hillsides reminded them of their homeland.

The lake is named for Vince Kramper, a longtime conservationist and farmer in Dakota County. Kramper, who has retired from farming, served on the Papio-Missouri River Natural Resources board for 30 years and worked on this project for over 12 years.

The lake is encircled by two trails. One for hiking and the other for horseback riding.

The area promises to be a premier destination for not only fishing, but camping, hiking, horseback riding and other outdoor pastimes.