My Journey into Big Game Hunting By Gary Howey

Hunting Big Game is a great sport, especially when you’re a young kid that grew up in northeastern South Dakota.

My journey into the sport of Big Game hunting started out rather innocently!  I grew up in Watertown, South Dakota and was always looking for another outdoor adventure, joining Cub and Boy Scouts and reading their publication from front to back as it had stories and information on camping and other outdoor activities.  Then I looked for and read every adventure book available, and especially liked those written by Jack London and similar writers.

It was my way of getting away, going to places, I thought I would never have the opportunity to go to, and these books opened my eyes to a much larger world than I lived in.

My idea of hunting when I was a kid growing up in Watertown was being out with my BB gun after stripped gophers in a pasture, stalking squirrels in the woods and rabbits along the Sioux River.

I loved it, even though many times, I’d come home without firing a shot, yet it was still a great experience and what got me into hunting.  If I hadn’t done it, I may have never gotten into any other type of hunting.

As I got older, ten or eleven, Watertown Recreation had archery classes at the auditorium, which I took and later became a member of the archery club.

The archery equipment was furnished by Recreation and we had what we thought was Hi-Tech equipment, our thirty- pound fiberglass recurve bows that shot the best cedar arrows, a dollar could buy!

We competed in an archery tournament in Minnesota and when we came to the line and looked at all the contestants with laminated wood bows with stabilizers and such; we darn near turned around and went home.

We were shooting field targets that looked like they were set up a football field away and because our group had only shot short distances, inside the Watertown auditorium, we didn’t have a clue.

Just as we were about to start the competition, it started to drizzle and after a couple of rounds, the glue holding the fletching on our cedar shafts let go and what little accuracy we had quickly went out the window.

It’s a wonder I ever picked up a bow again, but I’m glad I did as hunting with a bow has allowed me to expand my hunting experience.

What exactly is Big Game?  To some, Big Game may not be deer, but to me, someone who, as a youngster only hunted with a BB gun, having the opportunity to go after deer, antelope, bear and elk was Big Game hunting to me.

Some hunters believe in order to go on a Big Game hunt you’d have to travel overseas to hunt, Cape buffalo, Leopards, Wildabeest, Lions, Gemsbok, Impala and other exotic animals. 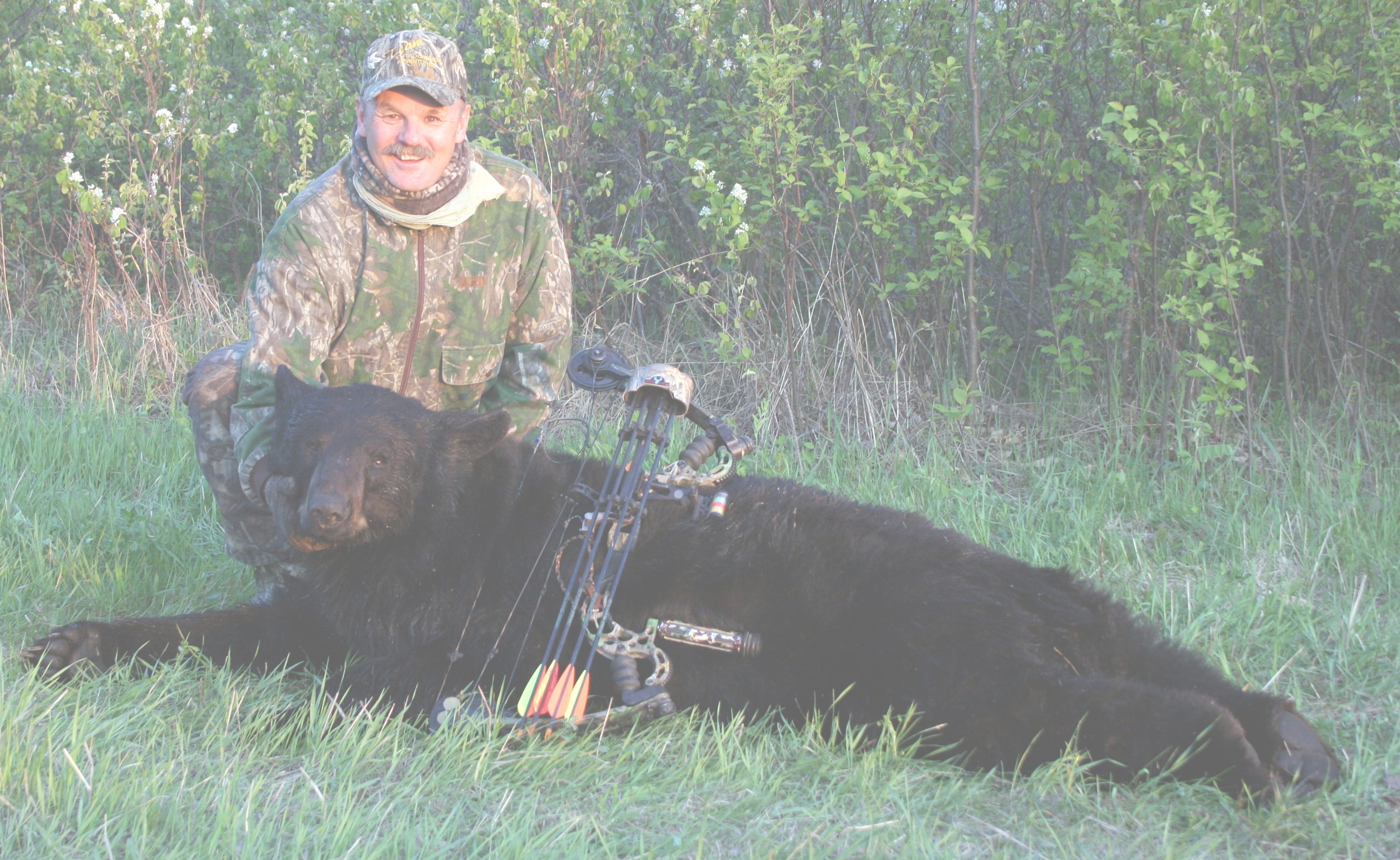 Big Game hunting can be whatever you want it to be and hunted with your weapon of choice and that can be a rifle, muzzleloaders or archery equipment.

I’ve been very fortunate to have the opportunity to hunt several species with both rifle and archery equipment in the U.S. and Canada.

I didn’t hunt deer until after I came back from the Army, when I moved from South Dakota to my current home in Hartington, NE.

At the time, I was on the road selling parts for the Ford dealership in Norfolk, NE. and made quite a few friends while traveling up and down the road.

One of these was Gary Fredericks, Verdigre Body Shop; we had become friends and talked a lot about hunting.

Gary was a deer hunter and when he invited me to join his group on a rifle deer hunt, I jumped at the chance, it didn’t matter I didn’t have a rifle, I’d figure that out later.

I was fortunate to have a friend who owned a gun shop in Hartington that was good enough to allow me to purchase a scoped rifle on payments.

When the week of opening day came, I was ready.  I stayed the night before the opener with the Fredericks and would toss and turn the entire night thinking about my first deer hunt and what the following day would be like.

It was a great hunt; one where I took my first deer, a Mule deer buck  and after that, I was hooked and  wanted to do more, to really get into the sport..

Since that hunt, I’ve hunted rifle or muzzleloader deer, in Nebraska, Michigan, Wyoming and Mississippi.

My first archery deer was taken on one of the coldest days I’ve spent on the Elkhorn River bottom, taking a mature doe with my compound in subzero temperatures.

Since that time, I’ve taken quite a few deer as well as other antelope, with many of these mounts hanging on my office walls in Hartington.

In 2007, I had the opportunity to film an archery black bear hunt in Manitoba and if I could take a black bear with a bow, I felt as if I was really hunting Big Game.

On that trip, I’d hunt with outfitter Blair Hopfner in the Riding Mountain National Park near Ste. Rose DuLak, Manitoba. The hunt was over bait where we were perched high in the air within forty yards of the bait stations.

On the first afternoon, several sows with cubs come into the bait where I hoped the cubs wouldn’t decide to climb up the tree I was in, as nothing is worse than getting between a sow and her cubs. I did have two cubs who seemed to like the tree I was in and hung around the base of it for some time and then lucky for me, wandered off with their mother.

Several sows glanced up in my general direction, clacked their teeth together and huffed, letting me know they were aware that the dark figure in the tree was there. Because bears have poor eyesight, I didn’t appear to be an immediate threat and they backed away into the woods.

The following day, I saw several boars including a smaller cinnamon bear with a blond V down it’s back, a bear I thought seriously about taking, but it veered off to my right and then turned back in the direction it had came before coming into range.

Several boars came towards the bait barrels but moved off before getting close enough for me to take a shot, with a smaller boar that came into the bait station that I passed on. It was only my second day in the stand and I was hoping for a shot at a larger bear.

A bigger boar, one I deemed worth taking started making its way down the trail off to my right and needed but a step or two out of the brush in order for me to get a clean shot. As it made its way out towards the bait, I reached for my bow and as I brought it up from the bow holder, I nicked the limb. The bear paused just inside the brush, as I waited not so patiently for him to move into the open.

The bear walked slowly back in the direction it had came and now the fear that I may have blown it became reality.

To make the shot, I’d have to thread the needle, placing my arrow between the trees in a ten-inch opening as the bear moved by.

The bear, in no hurry to go anywhere fast ambled back up the trail, I brought my bow up as the bear approached the small opening, centered my pin on its chest, sending my arrow whistling down through the trees, passing through the bear, imbedding itself in the base of another tree.

The bear moaned lurched upward, charging off through the brush, crashing into the swampy area about fifty yards from my tree stand.

It was the largest bear taken in the camp that year, with its skull measuring 18 9/16″, which qualified it for Pope & Young North American Big game record book.

Now, each time I walk by that bear rug in my office, I think of that hunt, that experience which will be with me forever.

My idea of Big Game hunting may not be the same as others, but to me, coming from hunting gophers, rabbits and squirrels with a BB gun to having the opportunity to hunt deer, antelope, elk and bear was what I had always envisioned as a Big Game hunt.

I’d recommend it to anyone, no matter what Big Game you’re after. It gives you the opportunity to travel to different states and provinces, spend time with good folks who are just as passionate about the outdoors as you are. You’ll have the opportunity to spend time in God’s country, to unwind and enjoy some of the finer things in life.