WEBSTER, S.D. | Bitter Lake appeared to be a sleeping, gentle giant as I peered across the big lake from the east shore boat ramp. Its waters were flat calm, a very unusual thing in this year of constant wind.

Cory Ewing backed his big Lund into the water and Austin Creamer, Hartington, Neb., and I jumped in while Gary Howey, Hartington, parked the trailer.

Soon the three of us were motoring over the flat water and the slight chill in the air made me glad I had the pull over windbreaker on.

It wasn’t long before Cory cut the RPMs and we glided into a saddle between the shoreline and a sunken island. The water here ranged from 6 to 9 feet deep and the weeds on either side of us gave away the shallower structure.

“Walleyes were in here thick yesterday,” he said as we idled through with our eyes glued to the graph. Soon the familiar arches of fish showed up. “They’re still here.”

We dropped down one-eighth-ounce jigs tipped with minnows and began to jig vertically while Corey moved us slowly with the electric motor.

Austin, an intern with Gary’s Outdoorsman Adventures, had never caught a walleye, but the high school senior was a quick learner. He landed the first fish, a 15-inch walleye. That was a fine start and we worked the area for about an hour, landing several more walleyes from 14 to 17 inches.

And then we moved.

This time Corey selected a saddle between two sunken islands. Again weeds gave away the shallow water on either side of the 6- to 9-foot deep area we were fishing. I had retied with a 1/16-ounce, chartreuse lead head, a size I am much more comfortable with in this shallow water.

Again, the depth finder told us there were fish present and again we proved it right by catching them.

It was good, steady action and we caught what looked to me like three separate year classes. They are just good eating-size walleyes. And then the big fish hit. 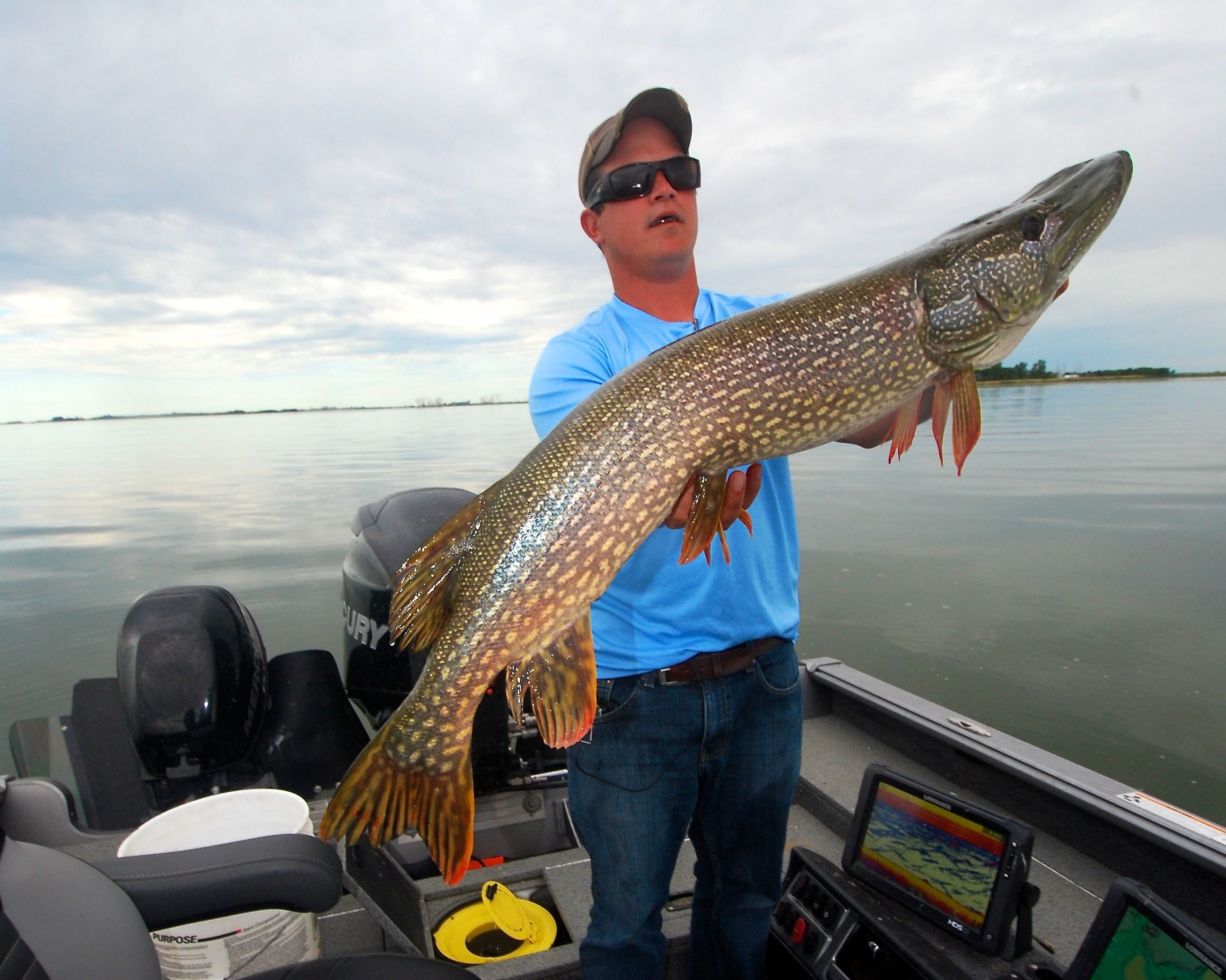 The big northern gulped a minnow tipped jig an Cory Ewing landed him. Cory was using Fireline and the jig was in the maw of the big pike. He never had landed it on monofilament. It’s sharp teeth would have cut the line

“Whoa,” Corey said as he stood up from his chair in front of the tiller. “This is a good fish. It’s either a very big walleye or a northern pike.”

Whatever it was made another run, peeling line off the drag of Corey’s spinning reel.

“Gotta be a northern,” I thought.

Then it rolled on the surface and I knew I was right. But this was no 6- or 8-pound hammer handle. This was a broad backed, toothy monster that could strike fear into the heart of any walleye in the lake.

Soon we had him in the net and after a quick photo, returned him to the water to fight again.

“There are quite a few northerns in this lake,” Corey said. “They can do a number on the perch and walleyes.” In fact, some of the

walleyes we caught displayed brushes with the wolf of the deep by missing scales and fins.

We had been on the water early, fishing by 7 a.m. because we expected the day to be very sunny and hot. It wasn’t. Cloud cover protected us from the sun and a light breeze developed to make fishing very comfortable.

Our pattern was the same throughout the day. Fish saddles between the lake’s many sunken islands.

I never realized just how many sunken islands there are on Bitter, South Dakota’s largest natural lake. The weeds give them away now. I looked at the map on Corey’s GPS unit and was amazed. This is a very dangerous lake to negotiate without a chip showing the islands.

“There have been a lot of lower units lost out here,” Corey said.

Corey operates Waubay Lake Guide Service. We have fished with him since the first year he began guiding. No one knows the area better than he does. We have had some truly phenomenal walleye fishing with him, some on sloughs turned to lakes which have no name, just large walleyes.

How he finds them, I have no idea. I’m pretty good at knowing where I am at all times, but I couldn’t find most of those lakes if I had to.

It really didn’t surprise me when Corey said we’d fish Reid Lake the next day. It’s southwest of Webster about 30 miles and kind of off the beaten path and about five miles of gravel to get to it. There’s a boat ramp on the northwest side of the 1,000-acre lake and that’s where we launched.

We motored maybe 300 yards before putting the electric down and began trolling bouncers and spinners with minnows. Again, we started catching fish right away, but they were small. Cory was using a chartreuse spinner with a chartreuse twister tail and no minnow. He rigged Andrew up the same way and they out fished both Gary and me with the spinner and minnow.

I asked Corey if he fished this lake very often.

“A couple of years ago I fished it every day,” he said

We were keeping an eye on a developing storm to the west and when we began hearing thunder, decided to head in. By the time we loaded the boat a light rain was falling and we could see it would soon get worse.

It did, but we were out of there. Someday, I’ll go back.

← Prev: Perch, Panfish & And Kids Next: STRUCTURE MINUTE CHANGES CAN MAKE THE DIFFERENCE By Gary Howey →