What does it take to have the ability to take dozens of paralyzed veterans and other individuals fishing on the Missouri River? It’s a monumental task, which is pulled off each year in the Missouri River waters adjacent to Chamberlain/Oacoma, S.D.

Our destination, Arrowwood, Cedar Shore Resort, which located on the west bank of the Missouri River near Oacoma and as  we pulled into the parking lot, there were vehicles from several states including; Minnesota, Iowa, Nebraska, South Dakota, Colorado, North Dakota and Texas.

The resort was the headquarters for the 2017 Firefighters Paralyzed Veterans of America North Central Chapter Joel Niemeyer Memorial Walleye Fishing event that was held May 25 and May 26.

This event, the 15th annual would give disabled veterans and other individuals the opportunity to get out in a boat to do some fishing, for some; this would be their only opportunity of the year.

Sponsored by numerous Fire fighters organizations, the North Central Chapter of the Paralyzed Veterans of America, local sponsors, several veterans groups, numerous volunteers, that included up to thirty boat commanders and first mates,  who’d volunteer their time, boats and equipment to take these folks out onto the river to fish.

Once the attendees, the event anglers arrived, everything was taken care of rooms, meals, sack lunches, bait and even ice for the coolers. 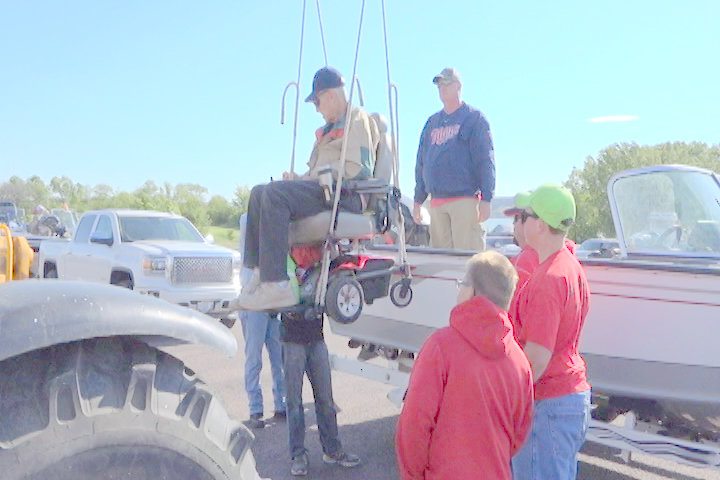 One of the attendees to the Fishing event being transported in his wheelchair from the ground up into the boat that will allow him to go walleye fishing on the Missouri River. (Outdoorsmen Productions Photo)

Those who needed assistance getting in the boat were accommodated by a group of high school youth who helped attach the wheel chairs to the lift that would then move them into the boats. The boat commanders

The boats came from the loading area, lined up as they took turns launching out of the marina below Cedar Shore.

As the boats came out of the no wake zone, some would be heading south while others would make a left turn from the marina heading north.

The first day of the event featured heavy winds supposedly going down around noon, but, as the day progressed, the wind picked up in velocity.

The morning of the first day, we decided to go north, in the boat that good friend Cal Plennis, from Sioux Falls, S.D. had supplied us with, we worked our way up river through the waves created by Mother Nature and the wakes of the larger boats equipped with 250 and 350 HP motors.

We followed several of the boats to a windy area that allowed decent drifts as long as you could use your trolling motor or kicker to keep you straight. Those with kickers, their 9.9 hp second boat engine would use the kicker to push their boat forward while their bow mount trolling motor would guide the boat.

As we started to drift through the area, we dropped one of our own lines, just in case our drift would put us over some active fish. It wasn’t long before one of the boats to our right began pulling in fish on each drift.

After watching several of ten or twelve boats drifting the area, we slid over to one of the boats, filmed and asked what they were using; they indicated they were using a Slow Death Hook, an irregular shaped hook that when bait is added to the hook spins through the water. 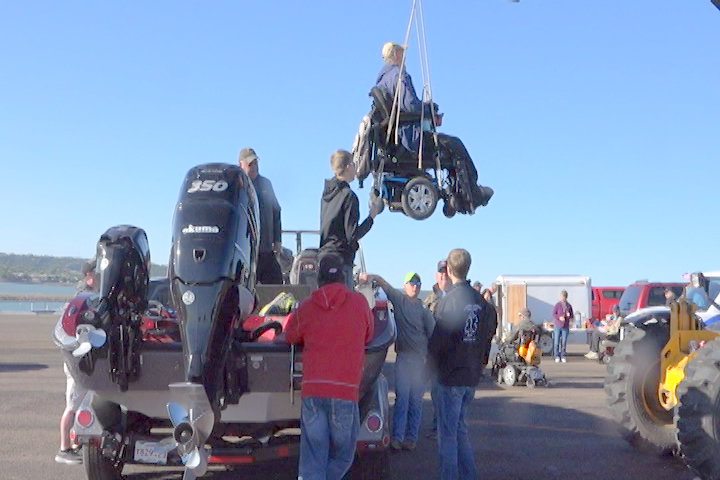 Another of the Aatendees as he’s lowered into the boat which will be his home for several hours as he gets the opportunity to go Fishing. (Outdoorsmen Productions Photo)

As the four O’clock hour approached, the boats began returning to the dock, the event anglers were lifted or assisted from their boat, with everyone getting ready for the meal that would be served at the Oacoma Community center.

As it was last year, the several veterans’ groups from the Oacoma area prepared an excellent meal, with Firemen from several states contributing to the event while a slide show was shown. After several drawing for some beautiful prizes the family of Joel Niemeyer, presented a plaque to the M.C. for the night for his many years of contributing and working with the event.

Day two of the event was an hour shorter so those attending the event, many from far away would be able to make it home at a reasonable time.

We began the day up north fishing the several areas where other boat captains had brought their anglers, as the day continued we worked our way downriver to the White River area to film others in the event, as the day before, there were plenty of fish caught.

As the boats headed back in and the event drew to a close, the anglers were unloaded and all the fish cleaned and distributed among the attendees, it was obvious by the looks on the attendees faces, that this was a great event for them with many of them asking about the date of the 2018 Firefighters Paralyzed Veterans of America North Central Chapter Joel Niemeyer Memorial Walleye Fishing event.

An event such as this takes coordination, hundreds if not thousands of man-hours, volunteers, sponsors’  such as the Paralyzed Veterans of America, North Central Chapter, Veteran’s Organizations, firefighters and boat captains and their first mates from numerous states.

We at Outdoorsmen Adventures and Outdoorsmen Productions are proud to be affiliated with such a great event.

END_OF_DOCUMENT_TOKEN_TO_BE_REPLACED 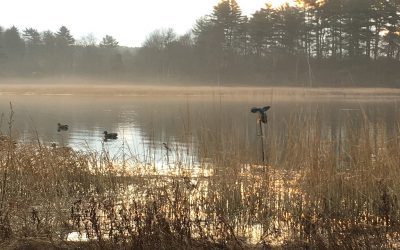