The Land of the Bear By gary Howey 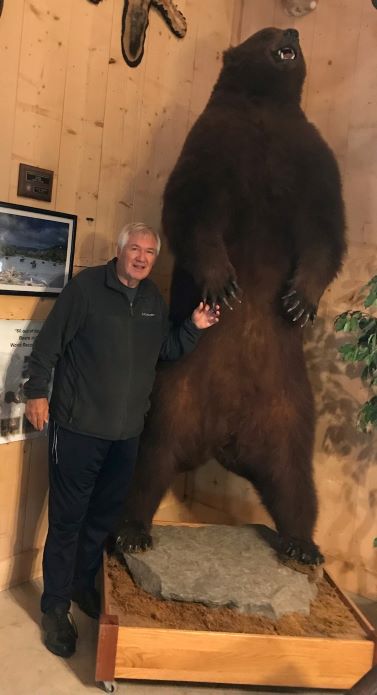 Can you imagine coming face to face with an eleven feet tall Grizzly Bear, that’s just what occurred in Siberia when Denny Geurink traveled there.

Denny, a good friend of mine, we’d filmed and hunted with on numerous occasions.

On our way to Gaylord Michigan to attend our annual Association of Great Lakes Outdoor Writers (AGLOW) writer’s conference Phil Larson another writer from Iowa spent two days at Denny’s lodge adorned with many of the mounts he took in Russia.

Denny would be one of the featured presenters at the conference where he talked about his “In the Land of The Bear book” and his adventures in Russia.

In his book he details the many things he and his hunters experienced there, the beautiful untouched land, the pristine rivers and the tremendous number of trophy animals.

In in 1991 he was approached by a Canadian Mining company, which had mines in the Soviet Union, in Siberia, about making a hunting trip to Russia, where he would be one of the first Americans to hunt in Siberia.

The communist Soviet Union was looking for a way to bring tourists to their country and since the mining company was already established there, asked them if they had any ideas as to how to advance tourism.

Their idea was to bring some prominent writers and television crews there to hunt and write about their experience and film these hunts.

Denny, at the time, was working as an Editor for Field & Stream magazine as well as the Producer/Host of his Outdoor Adventures television show when he was approached about being the first person going to the USSR to experience hunting & fishing there.

If he and his film crew came there to film, and write stories about their trip, it would be an expense free trip and when hearing this, his response was “when do we leave.”

Because the only people who had guns in the Soviet Union are the military and in Siberia, the location they’d be hunting, there was little if any hunting pressure.

Because of this, Russia has a huge population of Grizzly bears, estimated be around 100,000, with bears reaching up to eleven-foot tall, monstrous antlered Red Stag, Moose with up to 68” paddles, Wolves, Wild Hogs, as well as two species of the special species of the Grouse Family, one, the Black Grouse, a bird the size of our turkeys, as these grouse average around 22” long and weighing 4 pounds.

While there he also explored, fishing some of the most legendary Rivers in Siberia, on the Kamchatka Peninsula and the world famous Zhupanova River.

The trip was planned, with everything lined but before they left, the premiere, Gorbachev was put under house arrest, with many changes taking place in the Soviet Union.

Because of this Denny’s wife and family pleading for him not to go, but this was a chance of a lifetime that in the years following would become a very huge business for him.

He talked with the mining company, they assured him that it was still a go and that there’d be no problem as government officials would be along on the trip.

Upon his arrival, he was greeted by a guide, the military officials providing their transportation to Siberia, via Soviet military equipment, helicopters and armored personnel carriers.

It was not just the military which would accompany the crew, as several KGB agents would also tag along.

When he got to the camp, he felt that it looked as if it was the Wild West in our country 150 to 175 years ago as things were pretty primitive.

In the early years, Denny had many adventures, including close calls where two men on a snowmobile were chased by a giant bear, huge moose tracks, bears in camp, where a camp puppy was carried away by a giant sea eagle, being surrounded by bears, stalked by a bear, a bear dragging a hunting guide into the wilderness in his sleeping bag, wolves in the perimeter, huge moose in camp, wild weather and meeting the KGB.

Luckily everyone survived, with these being a few the experiences you’ll find in his book “Land of the Bears.

After the fall of Communism, the country modernized very quickly, with many American companies starting businesses there, including fast foods, hotels, as well as other business.

From his first trip in 1991 he continued hunting and guiding, through 2013, giving hunters and others opportunities to take their trip and their hunt of a lifetime with their Bears, Moose, Red Stags and other species making it into the Safari Clubs Record book.

Once I started reading it and seeing some of the trophies taken there, I had a tough time putting it down and once I read it, I knew that l would have to pick it up and read it again, as it’s just that type of a book, filled with adventure, unbelievable hunting stories and those of the old Soviet Union and the new Russia.

This is a great reading book, that I’d highly recommend, as I don’t put my name on anything that I haven’t thoroughly researched and since I’ve known Denny for over 20 years, he has all the credentials that make him an expert on Big Game Animals in Russia, the Number One Brown Bear Outfitter in the world.

The Land of the Bear, a 286-page book is available through Target Communications Outdoor Books 262-402-7668, glenn.hegland@gmail.com as well as on Amazon.

← Prev: Fall, is some of the Best fishing there is!  gary Howey Next: Hi Mountain's Turkey Biscuits & Gravy →