The gobble rang out across the creek bottom, up onto the road where I was using my shock calls to get a Tom to give away his location. As my call faded, a resounding gobble came from the tree-lined hillside adjacent to the creek

From the direction the gobble came from, it appeared that the birds were in the same general area where I had located them last spring. It looked as if my plan for opening day this year would be much the same as it was last season.

Before I head out opening morning,  I’m going to make sure I have everything ready, starting with checking my camo, making sure it’s in good shape and going from there to my calls, backpacks and shotgun.

Because I use my Winchester 12 gauge for several different hunts, I need to change my choke to either a full or extra full depending on what shells pattern the best with a particular choke.

I’ll test fire my shotgun at several turkey targets and decide which choke works best with which shells allowing me to put the most BB’s in the neck and head region of the target.

My opening day location was an area that could be hard to get into without spooking the birds, as it would require a good quarter mile walk over some open ground so the approach needed to be early, well before daylight and had to be done quietly.

Turkeys have an excellent hearing and if you don’t come in quietly, they’ll know something’s up and pitch out of the trees in the opposite direction.

What the birds can’t pickup with their hearing; they’ll spot you with their excellent vision. Their night vision isn’t good but once there’s enough light to see, they can detect movement and danger.

Now that you’re close, you need to set up, depending on how you have things laid out. In several of my locations I hunt on, I have deadfalls that I can climb behind and be hid, some are trees which have fell and trimmed so I can shoot over the top while others are dead timber I’ve drug over and piled up where I want to call the birds to. In other locations I hunt, I won’t have the luxury of dragging trees around and will have to rely on my poke in the ground blind, that’s lightweight and adjustable to any height so you can shoot over the top of it.

There are times when put out a decoy and other times when i avoid them completely, the main factor as to when I should use decoys is how the gobblers have acted to them in past seasons. If the decoys seemed to spook the birds, I go without, but if they don’t bothered them, I’ll probably put them out

One thing I will use even if I’m using a decoy or decoys is my turkey fan as a fan attracts other birds and can be used to hide behind when making a stalk or walking up on a gobbler.

Once you’ve located the birds with your locator calls, it’s best to start calling quietly just in case some of the birds are closer than you think, as you don’t want to scare them off. 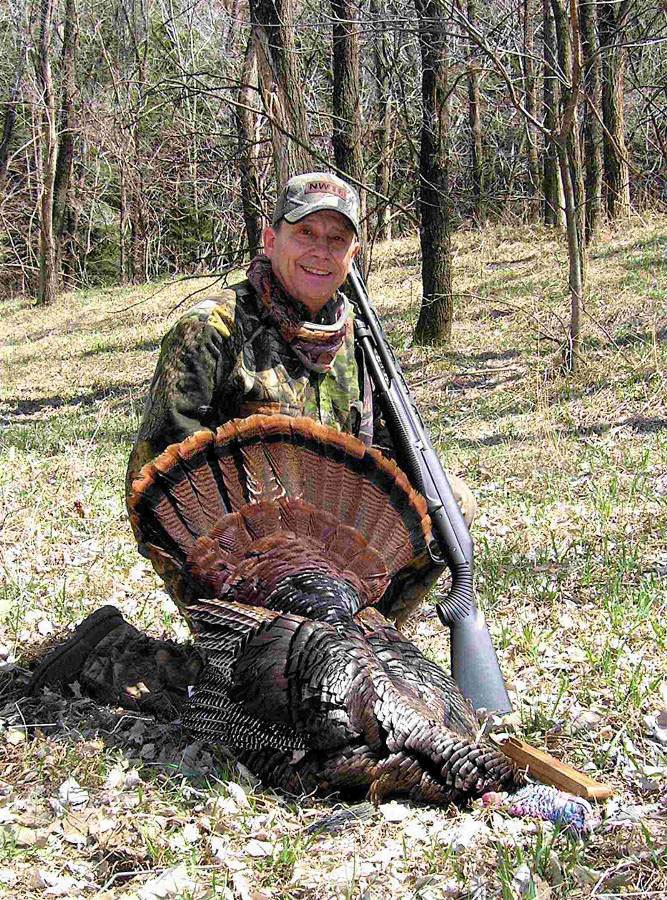 When you get a gobble, hold off on the calling for a bit, see if the bird gobbles back trying to pinpoint your position, if it does, call sparingly. If the bird gobbles once and then shuts up, you may have to get on him to keep him interested and if that doesn’t get a response, start working on the hen, as if the Tom isn’t interested, you may be able to make the hen mad, bring her over and the Tom with her.

Because we carry our Outdoorsmen Adventures cameras with us, we need to get the birds close and spend more time filming them than you would if you were just hunting.  Because we have extra bodies with us and hunt from the ground, movement has to be kept at a minimum, as we don’t want to go through this extra work and be busted by a nervous bird that spots our movement.

There are times when no matter how well you’ve planned, things may not work out, where you don’t get a whole lot of time to locate the birds or the weather has a drastic change, this is when you have to wing it, when we Run and Gun.

Our Run and Gun method is to get into the hills or woods well  before the sun lights up the eastern sky, when it’s very dark, allowing us to use the cover of darkness to travel long distances to move through the woods looking for a vocal bird.

If we’re in hill country with a lot of tree cover, we’ll move along the hill tops allowing us to hear a gobble from all directions, making sure not to silhouette ourselves against the top of the hill. Using our locator calls, we’ll start out softly with an owl or predator call, getting no response, increase the volume and listen for a gobble. If there are none, we’ll repeat the process until we get a response.

If were hunting after the sun is up in hill country with less trees, we’ll hunker behind any cover we can find, call and listen.  If there’s no response, we’ll inch our way towards the top of the rise and use our binoculars to spot the birds and then use the lay of the land to attempt to get close enough to the birds to call them in.

As the season progresses, you may have to change your plan, but at least be open enough to do so and not rely on the same old plan year after year as situations change and you must be ready to change with them.