A couple of weeks ago, Team Outdoorsmen Adventures Member Larry Myhre and I spent some with guide Kent Hutcheson time probing the waters of Lake Sharpe for walleyes.

We were hoping to hit the Pre-spawn or tail end of the spawn, which usually occurs when water temperatures hit forty degrees and ends when temperatures warm up past forty-five degrees.

Because of the strange weather we’ve had this spring, the walleyes had a tough time finding ideal spawning temperatures and the pre-spawn and spawn occurred differently than it had in past years.

In preparation of the spawn, walleyes should be stacked up in areas adjacent to rocky points, areas with a lot of wave action as the waves oxygenates the eggs and prevents silt from covering the eggs.

During the pre-spawn the spawn, we looked for the fish to be located in the deeper water along rip-rap areas or areas with fist size rocks. They were there, but the major part of the spawn had already occurred, with those fish using the area the smaller males, still hanging around hoping to find a female that hadn’t dropped her eggs.

We knew the walleyes spawned in the same areas every year, but it had happened earlier than in years past.  We were familiar with the area, but if you aren’t familiar with a body of water, some of the best information on where fish are located during pre-spawn and the spawn is available by talking with the local bait shop. 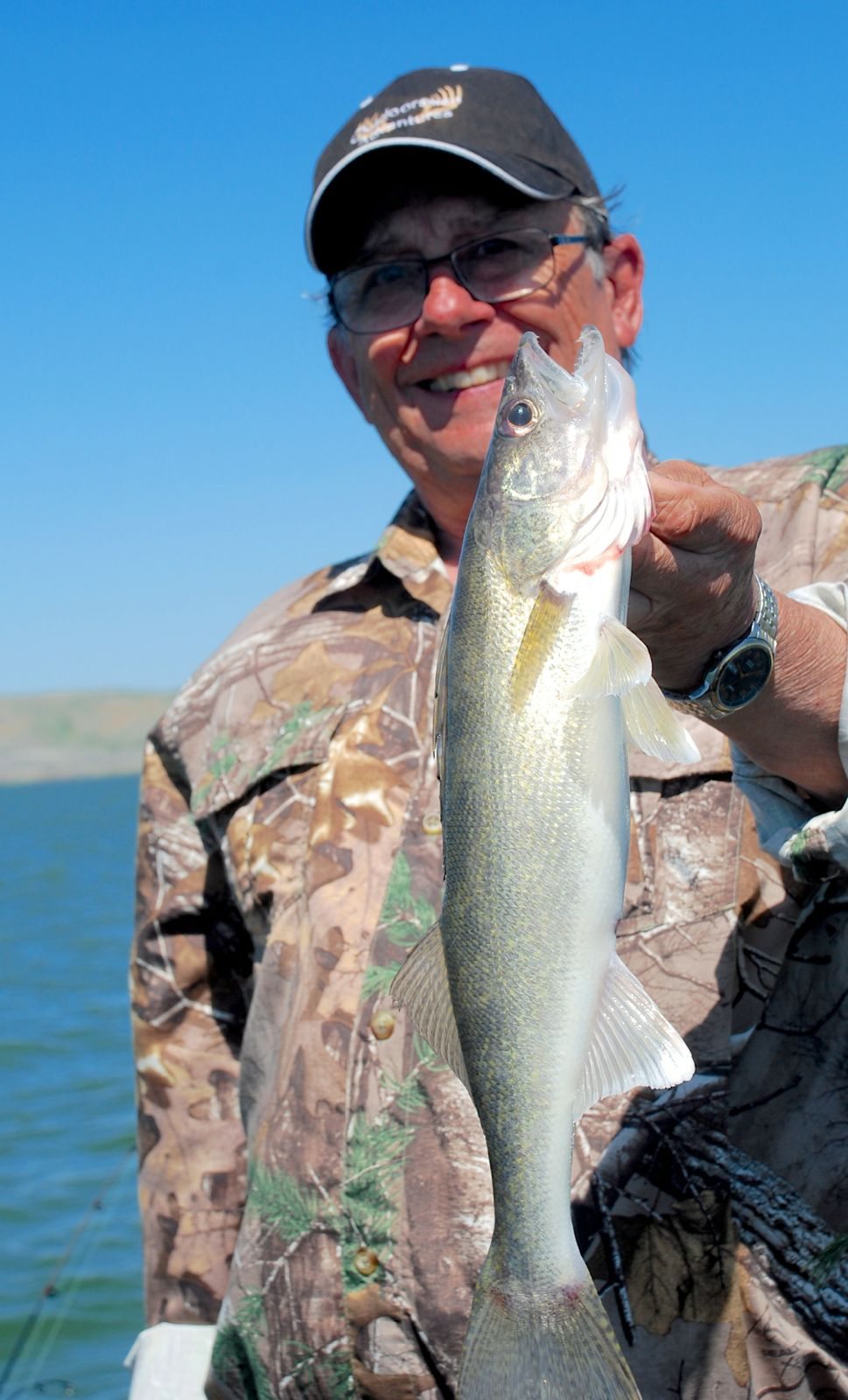 Once you have an idea as to where the fish are stacked up in preparation of the spawn, look for deeper water, twenty plus feet adjacent to the spawning area.

These should be the areas the fish are using prior to the spawn. Using your electronics you should be able to locate these fish, as the they will show up as hooks on your locator, generally lying on the bottom or one or two foot off the bottom.

If the wind is in your favor, you can drift from the up wind side, working your way through the area as slow as possible. When the wind isn’t right, drifting using your trolling motor keeps the boat straight and drifting slowly while allowing your partner and you to fish the drift effectively.

I like to fish vertically using the lightest jig possible, which can be a ¼-ounce jig in shallower water or heavier if needed. I like to bulk up my jig this time of the year, there are several reasons for this, one is what the fish will be feeding on will be the larger bait fish as the young of the year fish haven’t hatched out yet. I also like to add a larger Gulp minnow grub as it leaves a scent trail and adds to the size of the bait, making the bait drop slower, giving the fish more time to locate it.

When water temperatures are colder, fish are lethargic and known to mouth the tail of your minnow; it’s during these colder water temperatures that a stinger hooks really pays for itself. The stinger hangs down from the jig hook, and pegged in the minnow’s tail, which hooks these short striking fish that otherwise would have simply bit the tail off your bait.

During this time of the year, fishing slow is the ken as fish are cold blooded and the water temperatures haven’t warmed up enough for fish to be in a chasing mood and there’s no such thing as fishing too slow.

If you are fishing windy conditions, use your trolling motor or a drift sock to slow the drift, allowing you to fish even the lightest bait vertically

Walleyes will do their spawning in water anywhere from a foot to over fifteen foot or deeper. Those shorelines that are rock or gravel covered would be some of the typical spawning sites and if these aren’t available, walleyes will spawn in other areas. If you have an area that has broken rocks and gravel that’s less than ten feet, walleyes will probably spawning on it.

As I’ve mentioned in previous columns, in a reservoir such as those on the Missouri River the migration to these spawning areas will have begun in late fall, with the fish traveling long distances to spawn. Walleyes are travelers and it doesn’t bother them to move many miles to find the right spawning habitat.

In some areas, the face of a dam, that has a rip-rapped shoreline a prime walleye spawning location. Casting or slow trolling crankbaits along the face of the dam are great places to fish once the sun has gone down on into the night.

One thing we need to remember, not all walleyes spawn at the same time, as there are always those, which come in early or late, as this is nature’s way of making sure if a disaster happens; a flood or drastic water level drop  that some of the years spawn will survive.

River spawning walleyes and sauger are the easiest to predict, as they will swim as far as possible before dropping their eggs. The four South Dakota Missouri River dams will stop the migration, with the fish stacking up below them.

Spawning in natural lakes, because of their size and the amount of time it takes for them to warm up to the forty to forty-five generally occurs several weeks later that that in the river.

Once the spawn is over, the fish will move back into deeper water to recuperate from the spawn and one that water temperatures warm, will become more aggressive and more apt to chase a bait or a jig that’s presented more aggressively.

In our area, the spawn should be completed, but there still may be a few males in the spawning areas hoping to find a receptive female.