When the fish won’t bite! Do a Change-Up! By Gary Howey

What I’m writing about happened to me numerous times over the years and I’m sure it will happen again.

We were fishing on one of the numerous lakes in the Glacial Lakes and Prairie Region of Northeastern South Dakota, near Watertown and not having much luck. I knew there was a tremendous fisheries here as I was born and raised in this area but was beginning to think there wasn’t a walleye in the lake and as I was about to call it a day, I finally located some fish with my locator.

My eyes were glued to my locator, as they had most of the day, hoping to find these fish.

As I was working my way back and forth over this one particular spot, there they were fish just off the bottom in 12 foot of water, as well as several on the bottom. They were showing up as those big lazy arcs indicating the presence of fish and by the size of the marks on the locator, they appeared to be big!

Since they were located right on or just a couple of feet or so off the bottom, I guessed they were active walleyes and immediately marked the spot.

Grabbing a couple rods one rigged with a live bait rig while on the other I used a jig. I put the one rod with the live bait rig in a rod holder letting it drag along the edge the drop off, while I used a jig, working it up from the deeper water onto the flat where my locator indicated the fish were holding.

Even though the fish appeared to be active as they were off the bottom, it didn’t take me long to realize that these fish were in a negative mood or weren’t interested in what I was offering.

I started digging through my tackle bag, switching from one walleye bait to another, going with my old standards, a bottom bouncer with a spinner baited with a minnow. I tried a livebait rig with a crawler, a jig with a Gulp leech, bottom bouncer and spinner and finally going to a crawler on a plain hook with just a small split shot for weight, all to no avail.

These fish weren’t in the mood, no matter what I was putting in front of them; they just ignored my offerings or lay tight on the bottom refusing to move.

Once again, I started rummaging through my tackle bag, looking for something different that the walleyes may not have seen before, something to get them to bite. I needed something, that might get the fish’s attention, and to pull them out of their negative mood.

That’s when I decided to try something different. To do the change up and try a bait I’d used on negative fish in past years. The rig had worked on previous fishing trips on the Missouri River and on lakes in Minnesota to get lethargic walleyes attention and to get them to bite.

It’s not anything fancy; it’s just something different that most walleye may not have seen before! 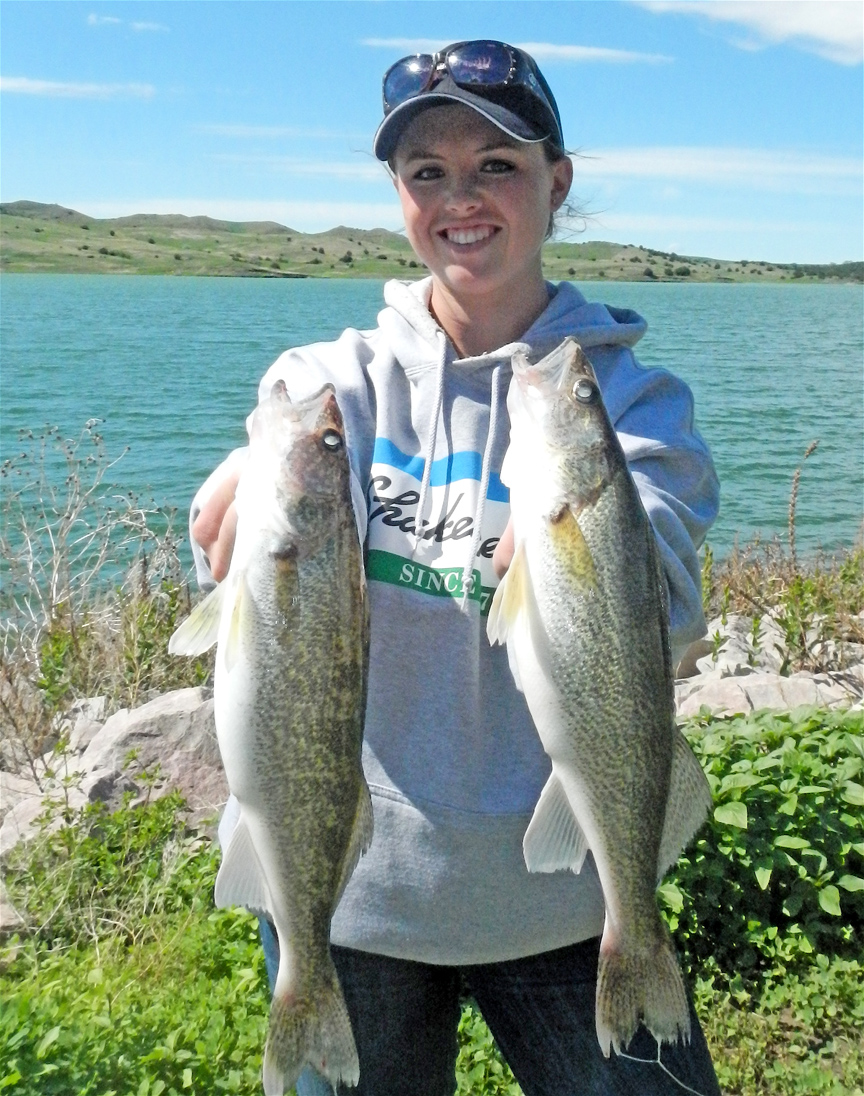 There are times when you may need to go away from your traditional walleye baits and try something different. These walleye were taken by Kella Rodiek, Mitchell, SD when she went to a change-up bait

I pulled a floating jig head from my tackle bag and started rigging it in a way that I hoped would work to get them to bite.

I attached the floating jig head about 2′ up the line and at the end of my line, in place of the weight, I attached a ¼ ounce jig.

Depending on the depth I’m fishing and the amount of current I’m facing, I’ll go with a 1/8 or a 1/4 oz. jig as sometimes, when fish are in one of their moods, downsizing both your jig and line test may be what it takes to get them to bite.

If I’m fishing deeper water, the lighter jig and line will work, but when fishing current, you may need a bigger 3/8 oz. jig to fish vertically

The style of jig I like to use on this rig is a stand up jig as it “stands up” holding my bait up off the bottom, putting it right in the face of the bottom hugging fish.

Once the rig ready to go, I baited the floating jig head with a Gulp leech, which would float about, 2′ off the bottom working its way right through the suspended walleyes with the standup jig baited with a minnow running right on the bottom.

This rig works in several ways, as I jigged along the bottom; it created a cloud of dirt that should attract the fish to my bait.  The floating jig head located above the jig at the depth where I had seen the suspended fish on my locator enticed those fish to bite.

On this trip, after switching rigs, I managed to take some excellent fish, several in the seventeen to nineteen inch range as well as some smaller fish.

I’ve used that rig as well as others that were predominantly bass baits, fished them in a different way than I would for bass, these “change up baits” have helped to make a poor day into a great day and I go to them whenever needed.

← Prev: Iowa Great Lakes are a multi-species paradise By Larry Myhre Team Outdoorsmen Adventures Next: It's Hot and They're Deep By Gary Howey →