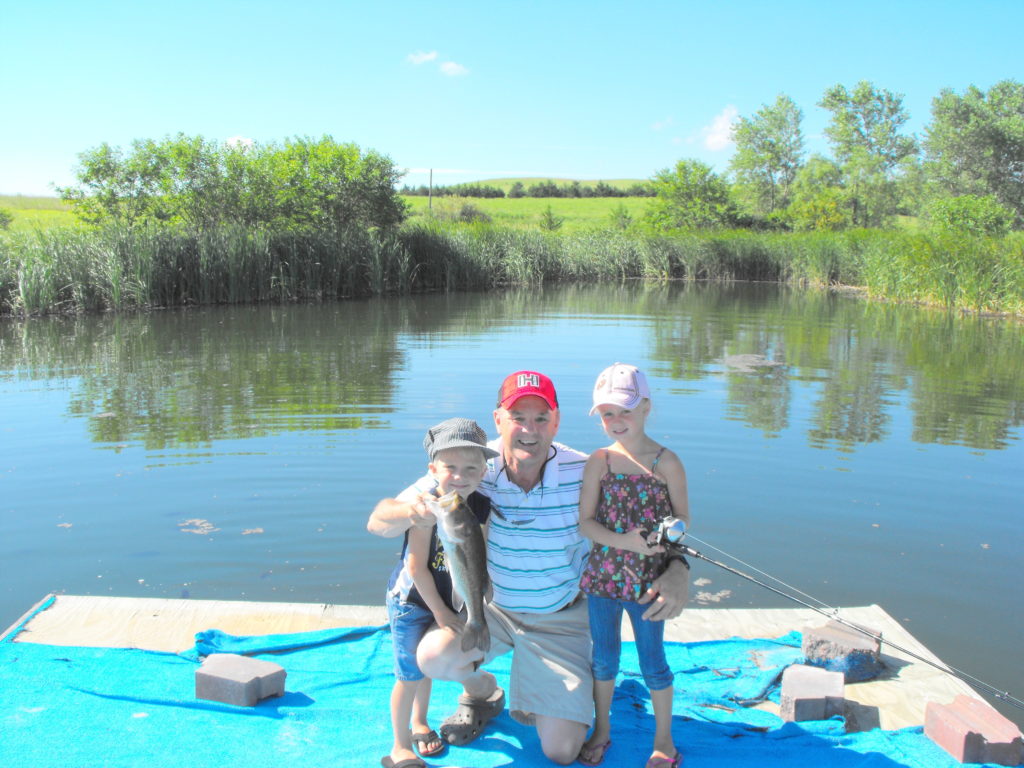 Gary Howey, Hartington, Neb. with his grand kids Braedon and Ashlynn Howey when they were younger with a largemouth bass they caught along the edge of the shoreline weeds. (Cassie Howey Photo)

The first thing fish will do before becoming active is to prepare for the Spawn, to locate an area to build their circular nests in the shallower water.

The spawn depends on how fast the sun warms the water, with shallow water warming up quicker than the deeper water, where the Spawn begins earlier in ponds, streams, rivers than it would in lakes and reservoirs.

In our area the spawn begins as the water warms up, with many of the fish which have by now, completed their spawning including the walleyes, smallmouth, largemouth bass, white crappie, black crappie, bluegill, channel catfish  with the blue catfish just coming out of the spawn.

Once the spawn is finished, the fish need time to rest and recuperate, moving deeper, as they recuperate, the fishing can be very slow, but, once they’re rested they’ll start to move from deeper water into shallows to feed.

What does this mean to the angler; it means that the fish are more aggressive and that the angler will have a better opportunity to catch some fish.

I’m one who doesn’t really care as far as what species is biting, as long as I’m getting bites on my hook, it can be catfish, panfish, bass and walleyes, just as long as something is happening.

If I’m on one spot and all I catch are smaller fish, I’ll move to another, hoping to get into some larger fish.

My favorite way to fish is using a jig as I’m in direct contact with or close to the bottom, where many of the fish are located.

Don’t get me wrong as I’ll use whatever the fish are biting on, artificial or live bait and will switch methods until I find what the fish prefer.

I believe I inherited this from the time I was guiding as the more fish you bring into the boat when on a guide trip, generally means the happier the clients are and at the end of the trip, the healthier the tips will be!

One thing I’ve learned while fishing with excellent anglers is to start small using smaller jigs, baits and smaller diameter line until you find the one bait the fish are after, .

Take for instance my guiding partner and tournament angling partner, Larry Myhre, Sioux City, IA., he always starts small and I do mean small as there are times when a 1/8th ounce jig is too big.

On one trip up to the mining area in northern Minnesota, we stopped at a flooded strip mine to try our luck at trout.

These mines are “DEEP” forty feet and deeper, where I was using very light line attempting to get my one eighth jig down to where the fish were suspended, Myhre was using one of the smaller jigs I’d seen him catch fish through the ice, catching one trout right after another in this open water  strip mine.

Once summer arrives and at times even before in the Midwest, the smaller ponds and lakes, especially those with clearer water, weed up, covering a good percentage of the water with submerged vegetation, emergent pond weeds along the shore line as well as the floating pond weeds.

Weeds are important to ponds and lakes as they produce oxygen, give the fingerlings, panfish and other aquatic creatures a place to hide and feed, as well as giving a place for larger predators, bass and pike, ambush location in the weeds where they prey on other fish or fish that happen to be in or moving along the edge of the weeds.

Weds are good for a pond or small lake unless they cover a large percentage of the water, making much of the water unfishable.

Weeds such as Coontail, Hydrilla and Sage Pond weed can do a good job of making the waters so covered up with weeds, that, there is very little open water to fish.

If there’s some open water, because of the weeds on top and below the surface, heavier tackle is needed, as once a fish is hooked, it’ll bury itself deep in the weeds and you’ll not only have the weight of the fish to bring to the boat, you’ll have as much or more weeds than what the fish weighs.

This is one example where lighter line means lost fish, so I’d recommend a heavy line such as Berkley Big Game in at least a fifteen pound test when fishing weedy waters.

Baits like top waters, spinners and buzzbaits are heavy enough that they cast well with the heavier line, giving you the added distance, allowing you to cover more water.

Once your buzz bait or spinner hits the water, to keep from getting hung up, snagged with the submerged weeds, you’ll want to hold your rod high and quickly crank to get the bait near or on the top of the water, once on top, you can slow your retrieve giving the fish time to locate and go after the bait.

If you have a small boat or float tube, you can get out into the deeper water, where the emergent weeds haven’t reached the surface you can cast top waters, spinners and buzzbaits, starting near the surface weeds, retrieving them across the open water.

Bass and other fish hang in the weeds, so if you’re on the water, you should get some action by casting your bait close to the weeds or along them, enticing the fish to come out after your bait.

If you’re on the shore, you can cast the lures I mentioned onto the water above the submerged weeds and slowly being it towards you; you’ll want those baits to run over the top of the weeds, creating a gurgling sound as well as the blades giving off flash, helping the fish to zero in on the bait.

If the surface lures don’t work, you’ll want to use some sort of weedless lures such as the heavier jig with a plastic or wire in front of the hook, allowing the bait to crawl through the weed without getting fouled- up.

When I’m fishing a heavy bass jig, like Northland’s Jungle jig I like to add plastic bait, a Northland Impulse Jig Crawler, giving my jig a little extra action.

If you happen to be fishing a pond or lake that’s open, you can also add a trailer hook to the bait which doubles your chance of hooking the fish.

Summers here and the time is right for going after the active fish, you’ll need to deal with the weeds which is a pain, but, that’s where the fish are, so work in and along the weeds until you pull the fish out of the cover.

Don’t give up easily, as it may take some time for the fish to become interested in and to locate your bait.

You all have a fun summer and a safe and enjoyable Fourth of July.

Gary Howey, Hartington, Neb. a former tournament angler, fishing & hunting guide and an award winning writer, producer and broadcaster, who was in 2017 inducted into the “National Freshwater Fishing Hall of Fame”. He developed and was the Producer- Host of the Outdoorsmen Adventures television series for 23 years, with the new Outdoorsmen Adventures television series thirteen week season begins Saturday April 4 at 11:00 am on KCAU-TV, Sioux City as well as throughout the upper Midwest. Howey is also the Co-Host of the award winning Outdoor Adventures radio show heard each morning at 6:45 am throughout South Dakota, Nebraska and Iowa, looking for more outdoor information, check out garyhoweysoutdoors.com, outdoorsmenadventures.com and like Gary Howey’s Facebook pages and watch the new Outdoorsmen Adventures television season beginning April 4th on KCAU-TV, Saturdays at 11:00 am, Hartelco, News Channel Nebraska on the Outdoor Channels www.MyOutdoorTV.com