Yes, Virginia, you can catch bass all winter By Larry Myhre

Reprinted from the SIOUX City Journal

Largemouth bass do not need to be an “accidental” catch in the wintertime. If you search out areas which attract them under the ice, use lures and techniques they like, you will catch them with regularity.

Yes, Virginia, you can catch bass all winter.

It was a brilliantly sunny day when Gary Howey punched several holes though the ice on one of the local ponds near Hartington, Nebraska.

Within minutes they were baited up and in the water with tiny jigging lures tipped with wax worms.

Gary set out a dead rod tipped with minnow under a bobber a few feet away from his bucket.

We weren’t exactly surprised when Gary’s first bite resulted in a 2-pound bass. I grabbed a few quick photos and went back to my rod which had been sitting on my bucket. I picked it up and felt pressure, so I set the hook. It was another bass which was twin to the one Gary caught.

Later his bobber went down and another nice bass flopped out on the ice.

All these fish were released.

This was not a unique experience for us. We have caught a lot of largemouth through the ice over the years.

I’m guessing that 99 percent of the largemouth bass caught through the ice were taken while the angler was fishing for something else. But bass do not have to be an “accidental” catch.

If you want to try something different this year, target largemouth bass.

I know most people think bass go lethargic in cold water, but I’ve caught enough of them through the ice to know they can be caught, and caught in numbers. 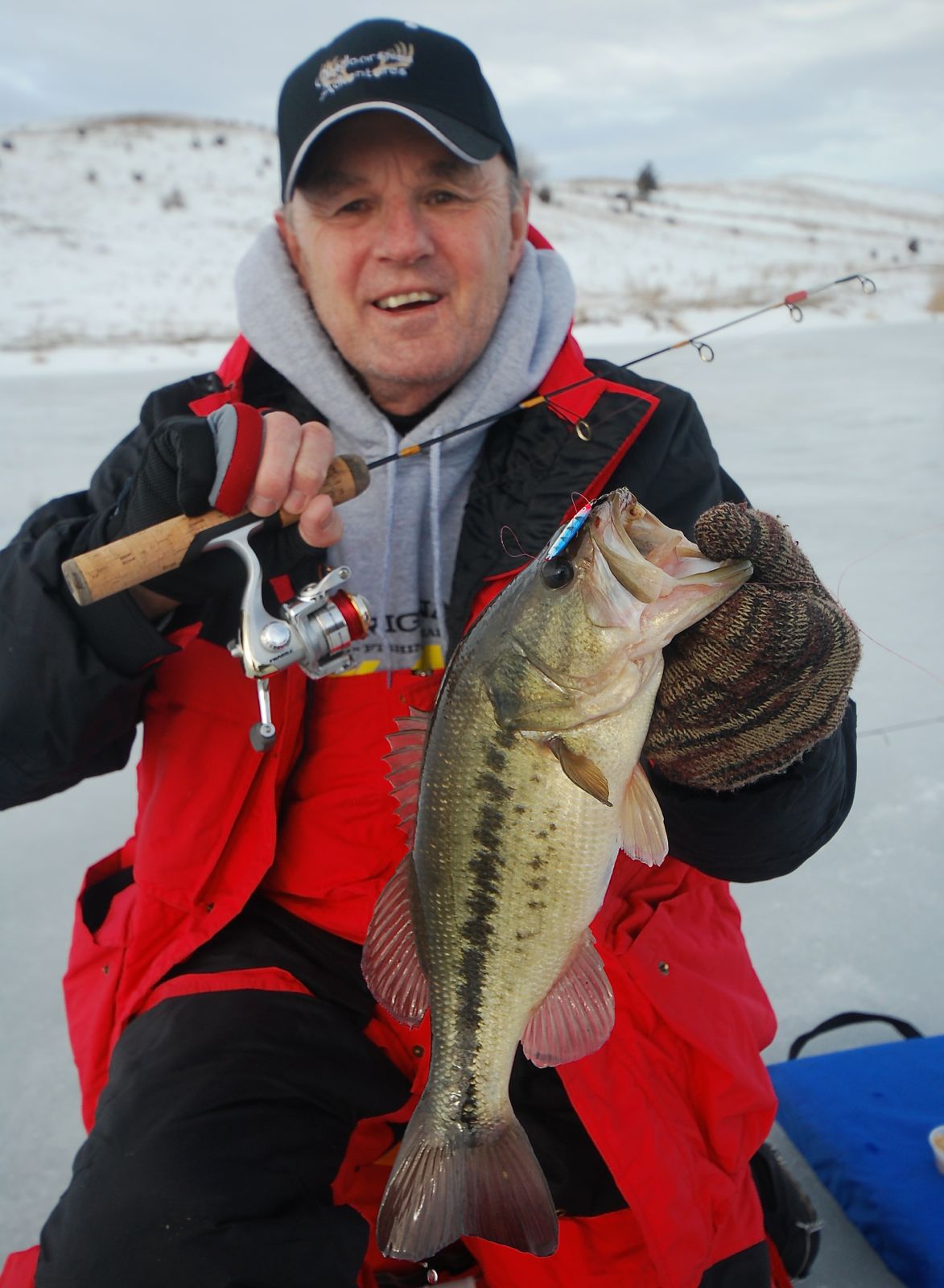 Gary Howey shows off a largemouth bass he caught while ice fishing near Hartington Neb.

When I think about bass fishing through the ice, I think of farm ponds. A good farm pond will host a large number of big bass. And fishing over large numbers of bass helps.

Other good areas would be county Conservation Board lakes. Many of these have artificial underwater structures and the bass will be hovering around them.

When it comes to natural lakes such as West Lake Okoboji, bass will be congregated around still-green weeds in water about 12 to 15 feet deep. Look in any of the bass-rich bays on these lake or any other.

While we are limiting our discussion to largemouth bass, be aware that smallmouth bass are particularly vulnerable in the winter. They like to winter in huge numbers in just a few areas of a lake. So when you catch one, there are bound to be a lot of others nearby.

Underwater cameras have really opened up our eyes when it comes to bass through the ice. You can watch them swim in. They’ll stop a few inches from your lure and stare it down. If they swim away, there is something about your presentation they don’t like. While I’ve caught them on tiny teardrops designed for bluegills, I’ve had better luck on larger lures.

One of my best has been the Swedish Pimple tipped with a wax worm or minnow head. I “flash” it once in a while by lifting it high off the bottom and letting it fall to the bottom where most likely it will send out a “puff” of sediment. Then I’ll lift it about 6 inches off the bottom and just hold it still. Now you and I know it is impossible to hold an ice fishing lure still. Just watch the tip of your rod. It’s always quivering. That is just the kind of action you want to import on that metal spoon.

If I had to stick with just one type of lure for bass it would be a small spoon of any kind fished in the same manner as above.

But spoons are not the only lure bass will take. Ice jigs tipped with live bait, tiny marabou jigs and even jigging lures like the Jigging Rap and the Lindy Darter in the small sizes will catch bass.

Some of the new tungsten ice lures should work well when tipped with any of the new, plastic “squiggly, wiggly” worms that have arrived on the ice fishing scene. Use your imagination.

I prefer to use 6-pound mono for bass fishing and a rod which is a little bigger than your normal panfish rod. A rod made for walleye fishing is just perfect.

In our area farm ponds I’ve caught bass throughout our usually relatively short ice fishing season. In natural lakes fishing seems to be best on early and late ice, although I have caught smallies throughout the winter on West Okoboji.

I haven’t had much experience ice fishing for bass on the northern lakes of Minnesota and northeast South Dakota. But from what I am told very few anglers specifically target largemouth and those that are caught are caught by anglers fishing for something else.

There is probably a lot to learn about ice fishing for largemouth. After all, we were told for years by fishing “experts” that you can’t catch bass through the ice.

Well, they were wrong.

More outdoor information on the outdoors is available at http://siouxcityjournal.com/sports/recreation/outdoors