The “Prime” Time for Predator Calling! By Gary Howey

The weather has changed and its cold, too cold to do many outdoor activates, sure, ice fishing is coming soon, but it may be awhile before there’s enough ice to fish.

One thing you can do if you bundle up warm is to call predators.  As the weather starts to change, become colder, furbearers, including coyotes and fox will have their heavy winter fur, which helps them make it through the winter.

Then there are those poor coyotes that have developed the mange a terrible infliction where they lose all or most of their fur, with the most humane thing that could happen to them would be to put out of their misery.

When it’s cold like it is, all critters and waterfowl will spend time moving and hunting, looking for some high protein food source to help keep their bodies warm. This means they’ll be out more as they have to eat often in order to make it through this tough time of the year.

This is why, this time of the year is “prime” time to call predators, with several of the predators you may have come to your call be coyotes, fox and bobcats.

Predator callers generally hunt with a small caliber rifle with lighter grain bullets, with 223-22-250 and 243 being three of the more popular calibers. Having s good variable scope mounted on tour rifle is also a good idea as it allows hunters to make some of the sometimes-difficult shots needed when hunting predators.

Getting permission to call predators is generally not too hard of a task as farmers and ranchers who’ve cattle have no love for predators. Predators are opportunists, taking advantage of anything that offering an easy meal and known to hang around calving yards.

All predator’s I mentioned above have excellent eyesight, hearing and an acute sense of smell, when calling predators you’ll want to glass the area you plan to call, then put together a plan, get in and set up quietly, which means using the terrain to your advantage.

Because the ground in the area is frozen or snow covered, you’ll want to come in slowly, making as little noise as possible and wearing some sort of camouflage to break up your outline is a big plus. Try to keep something, a cedar tree or some other vegetation between you and the area you’re calling when coming in to set up.

The most important thing, as is with all hunting is to use the wind to your advantage by calling with the wind in your face so the keen nose of the predators don’t detect you.

Even if the predators don’t spot you, they may attempt to circle around you to use the wind to their advantage. Don’t panic when this happens, and if you need to change shooting positions, do it slowly when the critter is in a low spot or behind a tree.

Our best calling has been when we have two or more hunters and whenever possible facing opposite directions so we’ve both avenues of approach covered in case a coyote would come in behind us.

Another mistake that some callers make, including our group is to hunt with just  scoped rifles, as on occasion, a coyote will pop up in front of you, too close to get a decent shot using a scope.  Now when we call, one of us always brings along a shotgun loaded with heavy loads.

We use a combination of calls, relying heavily on our ICOtec electronic callers, but all hunters with us will also have mouth calls just in case we’re caught by surprise.

The wounded rabbit calls, the cottontail and jackrabbit calls have been around a long time. In some areas, have been over used, making predators fooled by them once, much more cautious when coming into these calls.

This is the reason, we use the ICOtec calls, as their remote controls allow us to switch quickly to another call if the predator doesn’t respond or hangs up out of range. This and their ICOtec AD 400 electronic predator decoy which attaches to the call and comes with two interchangeable toppers, one resembling a woodpecker and the other a small furred critter that intermittently twitch, seductively, drawing the coyote or other predators attention to the movement which many times is all it takes to bring them into range. 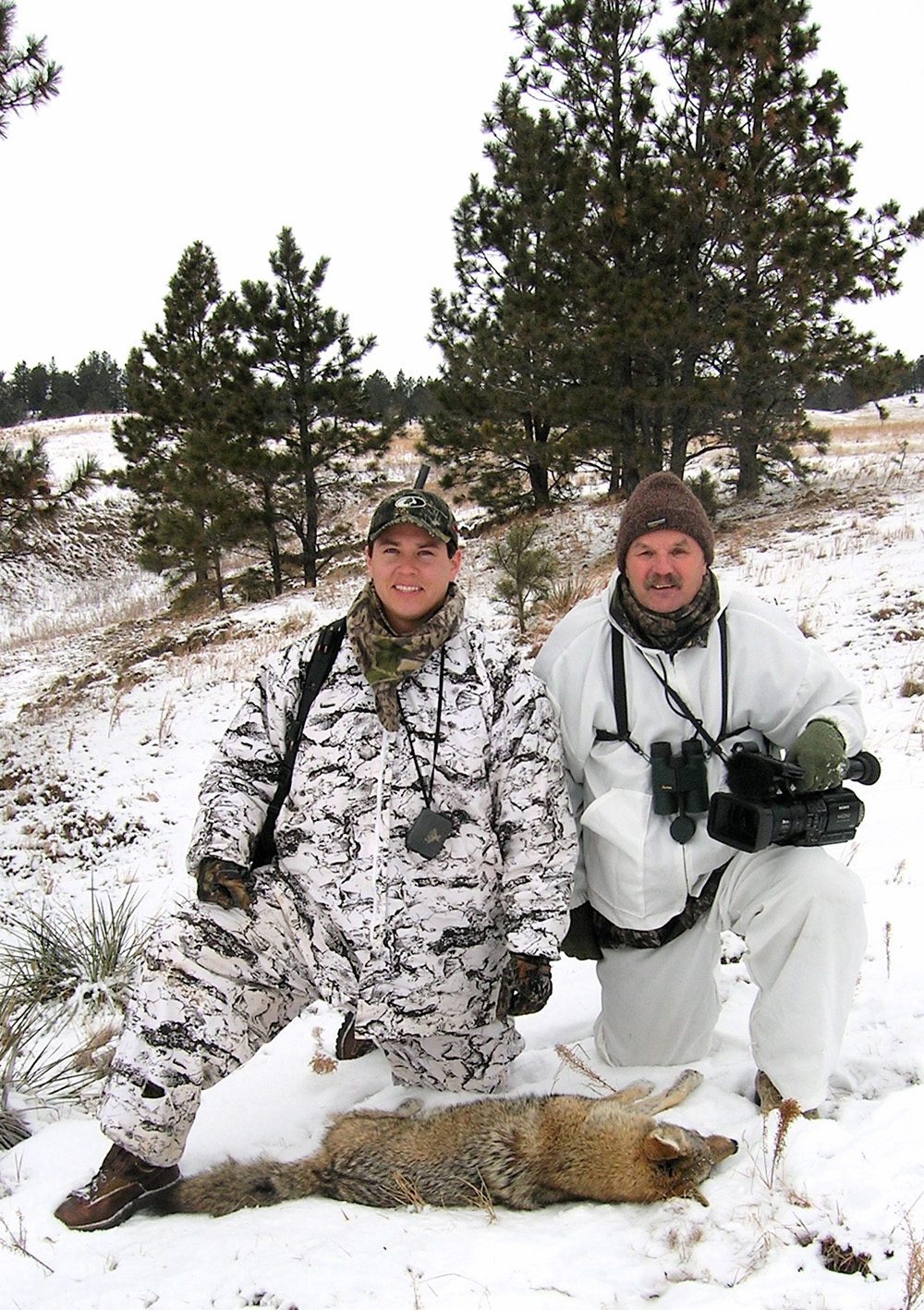 Team Outdoorsmen Adventures Member Ben Bearshield and author with one of the coyotes they called in while hunting on the Rosebud Reservation in South Dakota.

Generally, it’s a good idea to start using a wounded animal call, at low volume just in case a predator is close by.  Then pause, looking the area over closely to see if anything is moving or coming your way. If after several tries, we get no response, we may go to a coyote howl or yip, then pausing to glass things over and repeat the process.  If we spot a predator coming our way, depending on how they’re acting, go to a mouse squeak to draw them in closer, back off the calls completely to line up a shot, or woof at them to get them to stop allowing us to take the shot.

After twenty minutes or so, we’ll all glass the area making sure; nothing came in we didn’t detect and if the area is clear, move onto another set up.

If you have enough ground you can spend an entire day in the hills or pastures calling predators, helping to eliminate those critters that spend much of their time, killing nesting game birds, waterfowl and that give cattle ranchers a fit.

Calling predators is an exciting sport and at the end of the day, if you happen to take a good colored prime coyote, fox or bobcat, you may have some money to head out and do it all over again.