The Glacial Lakes of N.E. South Dakota are one of my favorite places to fish, as some were the lakes we fished as a kid growing up in Watertown, S.D.

Many of the lakes anglers are fishing today in the area were just sloughs or much smaller lakes and now are some of the largest natural lakes in the state.

We got together for supper at Perebooms where our first order of business was to check the weather report, which indicated it would be another hot summer day in northeast South Dakota.

Secondly, we had to decide which of the hundred lakes in the area we would head for. Bitter lake, the 15,000-acre body of water located just south of Waubay had a good bite going on; not really huge fish, but eager biters and those caught were fat and health. Bitter it would be and because of the predicted high afternoon temperatures, we planned to meet early, trying to be on the water before it became miserably hot.

Cory would launch his boat at the south dock, allowing us to get to the area we wanted to fish without having to take a long boat ride.

Our plan was to fish the mid lake area, not too far from the old roadbed where we’d look for aggressive fish in and around the weed beds

As we approached mid lake, there was a raft of boats working the old roadbed, which was fine with us as we were going to fish somewhere else where there would be less boat traffic.  We’d be fishing by ourselves where the fish would feel less pressure and won’t be spooked out of the area as easily.

When Cory’s bow mount went down, the front locator lit up, marking numerous active fish, coming up from the bottom.

Our plan was to use light jigs tipped with minnows, which was right up Larry’s alley as light jig fishing is his proffered way of fishing.

It wasn’t long before we were all getting bites, Austin, who had never fished for walleyes got right into it looking like an old veteran, keeping up with the rest of us in the crew, boating numerous walleyes. 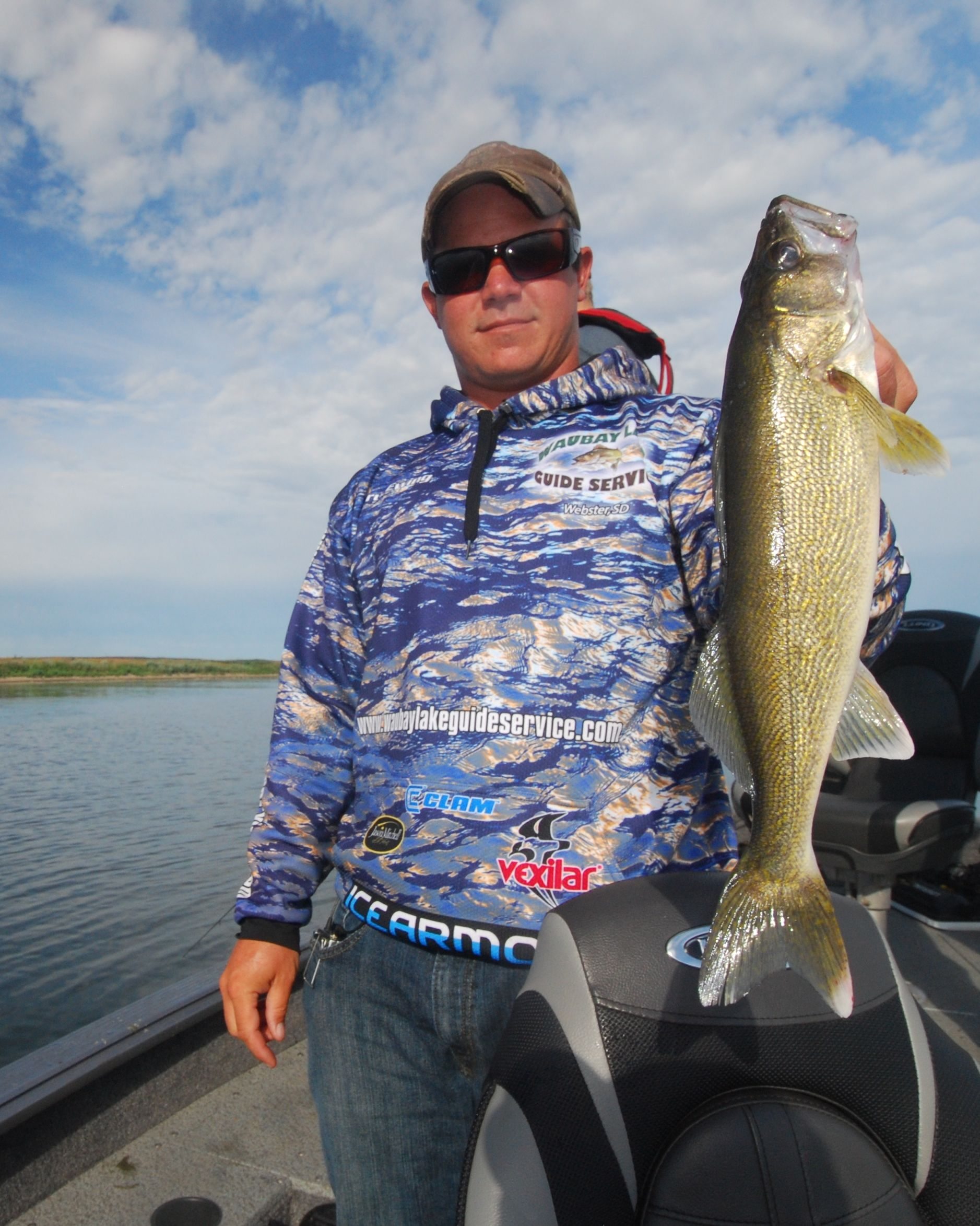 Cory Ewing, Waubay Lakes Guide Service with one of the numerous walleyes taken while fishing with Outdoorsmen Adventures Television two weeks ago.

We’d fish a weed bed until the bite slowed, then move onto the next, doing it again and again, catching some nice walleyes ranging from fifteen to seventeen inches, with even the smaller fish we caught being fat and healthy.

The bite was always better as the breeze picked up, putting the old walleye chop on the water, cutting the suns penetration as the light sensitive walleyes will go belly to the bottom on bright sunny days, becoming inactive on the calm days when the water is glass smooth.

Our largest a 21-inch fish was released, with the one limit we kept were 15 to 17 inch fish

The highlight of the trip was when Cory hooked into a big fish that took line and wasn’t fighting like a walleye with no walleye headshake.

He had the fish to the boat five times and each time we couldn’t identify it, as it never came to the surface.

We were sure it had to be a northern; those toothy critters that have broken so many lines because of their razor sharp teeth and sharp gill plates. Cory didn’t hurry it, as he wasn’t fishing for northerns, using a small jig tied to light Fireline.

When the fish finally tired out, and I was glad Cory bought along the big net, as smaller net wouldn’t have been large enough to hold the 18-pound fish.

The key to where we located the active fish was the stained and dirty water, which allowed the walleyes to move up to feed and the weed beds we were fishing between which held the baitfish the walleyes were feeding on.

Bitter, since it filled, becoming one of the larger natural lakes in the state has long been a walleye hot spot; this and other lakes in the Glacial Lakes of South Dakota offer some of the finest fishing in the state.

Multiple lakes such as Bitter offer multiple species of fish, giving anglers excellent fishing opportunities all twelve months out of the year.

← Prev: We drift for elusive blue catfish on Missouri By Larry Myhre Next: Gun Digest Releases the 71st Edition of “The World’s Greatest Gun Book” →