Invasive carp may ruin our fisheries By Larry Myhre 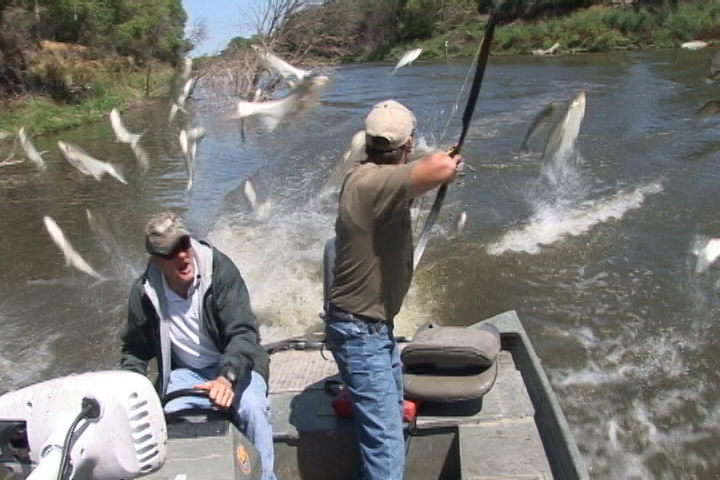 Reprinted from the Sioux City Journal.
A couple of years ago things were kind of slow on the river. I guided the boat upstream and turned to slide into the mouth of the Big Sioux River.
“I want to show you something,” I told Fran. “Get ready for some action.”
We came into the quiet waters of the Sioux at about half throttle. As I motored along the rocks the water began to explode with fish leaping into the air.
I pulled Fran’s head under the windshield so she wouldn’t get hit. Fish were thumping the side of the boat, leaping eight feet into the air, falling into the boat and flopping. It was total chaos.
When we passed through the school, I said, “What did you think of that.”
“You did that on purpose,” she said.
Of course I did. Welcome to the silver carp.
This flying fish is one of three common varieties of what is known as Asian carp. They have infected virtually all of the tributaries of the Mississippi River. Their accidental release into our rivers may be the greatest ecological disaster to ever happen to our fisheries.
The common carp, which stands as this nation’s greatest fisheries mistake, pales beside the damage that the Asian carp can do to our water.
The first of the Asian carp to populate our waters was the grass carp. Grass carp are vegetation eaters and they were brought to our country to control vegetation in ponds and lakes. Of course, they escaped. Of the three that populate our rivers, the grass carp does the least damage.
However, the bighead and silver carp are another story. They are planktivores which compete directly for food with forage fish and young game fish. Silver carp also pose a threat to boaters and other water recreationists because they have the ability to jump as high as 10 feet from the water when startled.
They are massive spawners, and channelized rivers are perfect for them. Their eggs must be supported by current until they hatch. Bighead carp can lay up to 1 million eggs during spawning and silvers can lay up to 5 million.
And they get very big. Silver carp can weigh up to 60 pounds and bigheads can weigh 100.
The first bighead carp caught in the Missouri River, that I am aware of, was in May of 1988. A reader called me at the Journal and said he had caught a fish he couldn’t identify. He described it to me, and it was nothing like I had ever heard of.
I photographed him holding the fish which weighed, if I remember correctly, about 8 pounds. I ran the picture, calling it a mystery fish and asked readers to help identify it.
A professor from the University of South Dakota called and said it was a bighead carp.
Soon they became abundant, and big. Local bow fishermen chased them and reported fish of 60 to 70 pounds.
Silver carp came on very fast, probably due to their huge spawns. It wasn’t too many years ago you hardly ever saw one. Now, it’s much different.
Last fall I was in the mouth of the Big Sioux and it was packed solid with silver carp. And the gizzard shad, which have the same feeding habits as the silver carp, seemed to be gone. Usually you see them flitting across the water’s surface in the Big Sioux in September. Not last year.
These carp are found in the Missouri River as far up as Gavin’s Point Dam, they are in the James River all the way to North Dakota, the Vermillion River as far as the Lake Vermillion dam and the Big Sioux as far upstream as the falls at Sioux Falls.
South Dakota Game Fish and Parks has instituted laws preventing the taking of live bait from many rivers and streams. Consult the 2015 Fishing Handbook for details.
That importation of these fish was allowed by our federal government was a gross miscarriage of authority. Didn’t anyone ask, “What will happen if these fish escape into our waters?” Apparently not.

The same question could be asked when it comes to the invasion of zebra and quagga mussels. Should foreign ships be allowed to dump ballast water in our great lakes without sterilizing it first? They were allowed.
And now we as fisherman and water recreationists are facing new laws and regulations.
If you are boating in South Dakota this year you must be aware of new laws rightly implemented to protect our lakes from these invasive mussels.
Again, refer to the 2015 Fishing Handbook or check out www.sdleastwanted.com for details.

This is the mouth of the James River last summer. Silver carp leap into the air as Gary Howey, Hartington, Neb., drives the boat while Marlyn Wiebelhaus attempts a bow shot.

In a nutshell, beginning May 1, you must remove any boat or live well plug when the boat is not in the water or enroute to a fish cleaning station immediately adjacent to the boat ramp site. You cannot transport bait or fish in water obtained from a lake, river or stream, except when traveling from the water to the closest fish cleaning station. If you transport fish or bait, the water must be obtained from a domestic water source.
Other states, and even individual lakes may have other restrictions. It pays to read the fishing regulations carefully now days.

These invasives threaten the outdoor activities many of us love best, fishing and boating. There seems to be no way to control them other than attempt to limit their spread. The federal government needs to wise up on allowing imports of non native fish or game. What’s next? Importation of northern snakeheads? Sorry, they’re already here, too.