Studying Missouri River fisheries is his job By Larry Myhre

While much of the work on the river addresses the endangered pallid sturgeon, other fish are also studied, and, as time goes on, Hupfeld hopes to expand those studies.

“The paddlefish season opened a couple of years ago, and we have been monitoring that by gill netting every spring and fall,” Ryan says. “They seem to be doing very well. We caught fish from 18 to 41 inches, and the average weight was between 17 and 20 pounds.

“We are also jaw tagging these fish to look at movement and also exploitation to some degree,” he continued. “We’ve had nine recaptures and eight of them were from our tagging and one was from South Dakota. We also have had multiple numbers that were called in by anglers.”

What the paddlefish snagging studies have shown is somewhat surprising. It is clear that these fish roam up and down our rivers a lot.

“We learned most of them traveled well over 500 river miles,” he said. One of the paddlefish we tagged in March right here at Decatur was caught in October. It went all the way down the Missouri, down the Mississippi and up the Big Muddy River and was caught below a dam. That’s 1000 miles.”

“We’re also trying to work with and cooperate with other states to manage these fish,” he says.

Over the years, grass carp, bighead carp and silver carp have exploded in numbers through the Missouri below Gavins Point Dam at Yankton, S.D. All of these carp, including another called black carp, originally came from Asia and were brought over by fish farmers in an effort to keep their growing ponds clean. Floods enabled many of them to escape into our waterways.

“Black carp haven’t made it up here that we know of,” Ryan says. “Asian carp spawn from April through October, and they are very efficient at feeding, much more so than native plankton feeders.

“There are no natural predators for them like there is in China,” he continues. “They are having a big effect on our native fish. We’re monitoring silver carp populations, looking at age and growth. They’re very good to eat. We need to start developing a market for them so we can relieve our native fish populations from the stresses of them.” 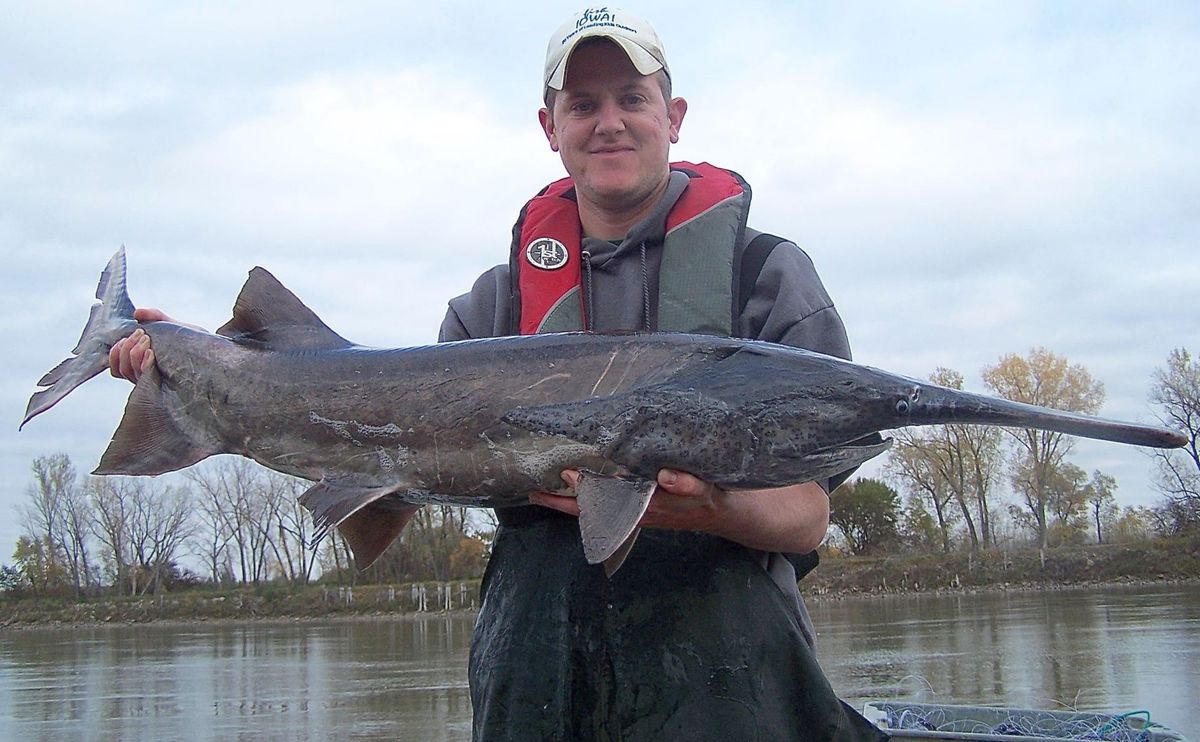 Other fish Ryan and his technician Jon Christensen are studying include channel catfish. They do channel catfish and flathead catfish sampling every other year.

“We just finished up our channel catfish sampling,” Ryan said. “We don’t catch quite as many of those as we should. I’m not sure why that is. We’re looking into evaluating our gear so we can have better captures.

“I think channel catfish populations are pretty stable. We’re going to continue to monitor their trends,” he says. “I can give you a brief summary of what we caught length and weight last fall. We got fish from 1 inch to 27 inches in weights up to 8 1/2 pounds. Average length was about 14 1/2 inches. There are good numbers of channel catfish out there.”

Ryan and Jon will do a flathead catfish sampling next spring.

“We do get a fair number of large fish,” he says. “Next spring will be my first sampling of them on this river. I think it was two years ago Jon got a 92-pound flathead, so there’s some big flatheads out there. I’ll know more next spring after our evaluation. I think there is a good population out there.

“A lot more anglers are reporting catches of blue catfish so we are kind of in the same stage as we are with the sauger population and trying to evaluate a method to see if their populations are increasing here,” he says. “Since the flood it seems like there are a lot of blue catfish. Are they moving north or have they had very good reproduction years and they are staying in the area? We just don’t know. We would like to evaluate that. It would be a very cool fishery to get going here.

“We’re working with some researchers from Missouri who have a lot more experience with blue catfish,” he says. “We’re hoping they can help us try to figure out the gear and the season to catch them more effectively.”

Ryan said they don’t catch many walleye or sauger in their sampling studies.

“We were just talking about our sampling plan for this year,” he said. “We’re trying to develop a method that will enable us to evaluate their populations better. I know there are some anglers out there in late fall and early spring and they are successful in targeting them. But we haven’t evaluated those fish thoroughly, that’s for sure.”

No studies on smallmouth bass in the river have been done, and their catfish survey last fall didn’t capture any smallies.

“I know that after the flood there were some good smallmouth populations around Sioux City, but we haven’t looked at that in the past,” he said. “Much of our work is focused on monitoring shallow water habitat to evaluate the population of sturgeon.”

And the sturgeon they are attempting to study is the endangered pallid sturgeon.

The focus of those studies has been at the Deer Island Wildlife Area just above the Little Sioux River mouth in Harrison County. The U.S. Army Corps of Engineers began a habitat construction area in the river in 2012 and completed it in 2014. The Corps widened that section of river by inletting behind the rip rap and creating a shallow channel. It included hydraulic dredging of over 2 million cubic yards of material and the placement of 60 rock and large woody debris structures.

“We monitor that from May to October looking for young-of-the-year fish, mainly sturgeon,” Ryan says. “The project has created all these different shallow water habitats for the young-of-the-year sturgeon. It is thought that the young sturgeon are not surviving, so habitat is being created.”

“We have seen young-of-the-year shovelnose sturgeon,” he continues. “They did stock some pallid sturgeon at that location a couple of years ago and we did capture some after that. We think it is the right habitat, and we think we’re going to need more of those to be able to intercept those fish. Not only is it good for sturgeon populations but it will benefit other fish as well. We’re going to try to develop more of those projects, so we can have a kind of a connected system instead of just one out in the middle of nowhere.”

A fish that might be underutilized by local fishermen is the shovelnose sturgeon.

“People could target them in the spring especially,” Hupfeld says. “They are spawning on the sandbars March, April and even into May.”

Ryan and Christensen are stationed at the visitor center at the Lewis and Clark State Park at Blue Lake.