Cranking Near Webster By Gary Howey

No doubt, most of you have heard about the Waubay-Webster areas great fishing, the many lakes and sloughs holding numerous species of fish.

This would be our teams destination as we traveled back home after filming in Minnesota, Ontario and North Dakota.

It was after noon when Larry Myhre, Sioux City, IA. and I arrived in Webster, where we grabbed a quick lunch at Perebooms and met with Team Outdoorsmen Adventures member Cory Ewing.

On this trip, we would be on one of the small lakes, one that was 200 acres and like many of the sloughs and smaller lakes had no boat launch, which meant, we would be fishing out of Cory’s smaller sixteen-foot boat.  As Cory launched the boat, Larry and I looked over the lake, the wind was blowing hard into the west shoreline. That area looked as if it would be a good place to start fishing as there are numerous things happening in the waters beating into the shoreline.

When wind blows into a shoreline, the water pounding against the shore, pulls muddy water back out into the lake, creating a mud line, cutting the suns light penetration, allowing the light sensitive walleye to move shallow to feed.

The wind and wave action creates a food chain with the zooplankton floating in the water being forced across the lake into the wind blown shoreline. Baitfish will follow the zooplankton, their main food source, with the walleyes following close behind.

As we pulled away from the shore, we talked about the species found in the lake; he indicated there were walleyes, perch and northerns found in this lake and throughout many bodies of water in northeastern South Dakota.

Our plan would be to pound the shallow water using shallow running Shad Raps, while Cory held the boat within casting distance of the windblown shoreline.
On his second cast, Cory connected with a healthy 3-pounder and just a few casts later; I landed one almost a twin to his fish.  Larry was having northern problems with the pike gobbling up his bait. When a northern chomps down on a lure, there is a good chance it will cut through your fishing line with their sharp teeth and gill plates and swim away with your lure.

He landed the first eight-pound northern; with the second one breaking off, after that, he dug into his tackle box, added a light leader to his line, preventing any further mishaps.

On every fourth or fifth cast, one of us had a fish on, all good fish in the three to three and a half pound range. 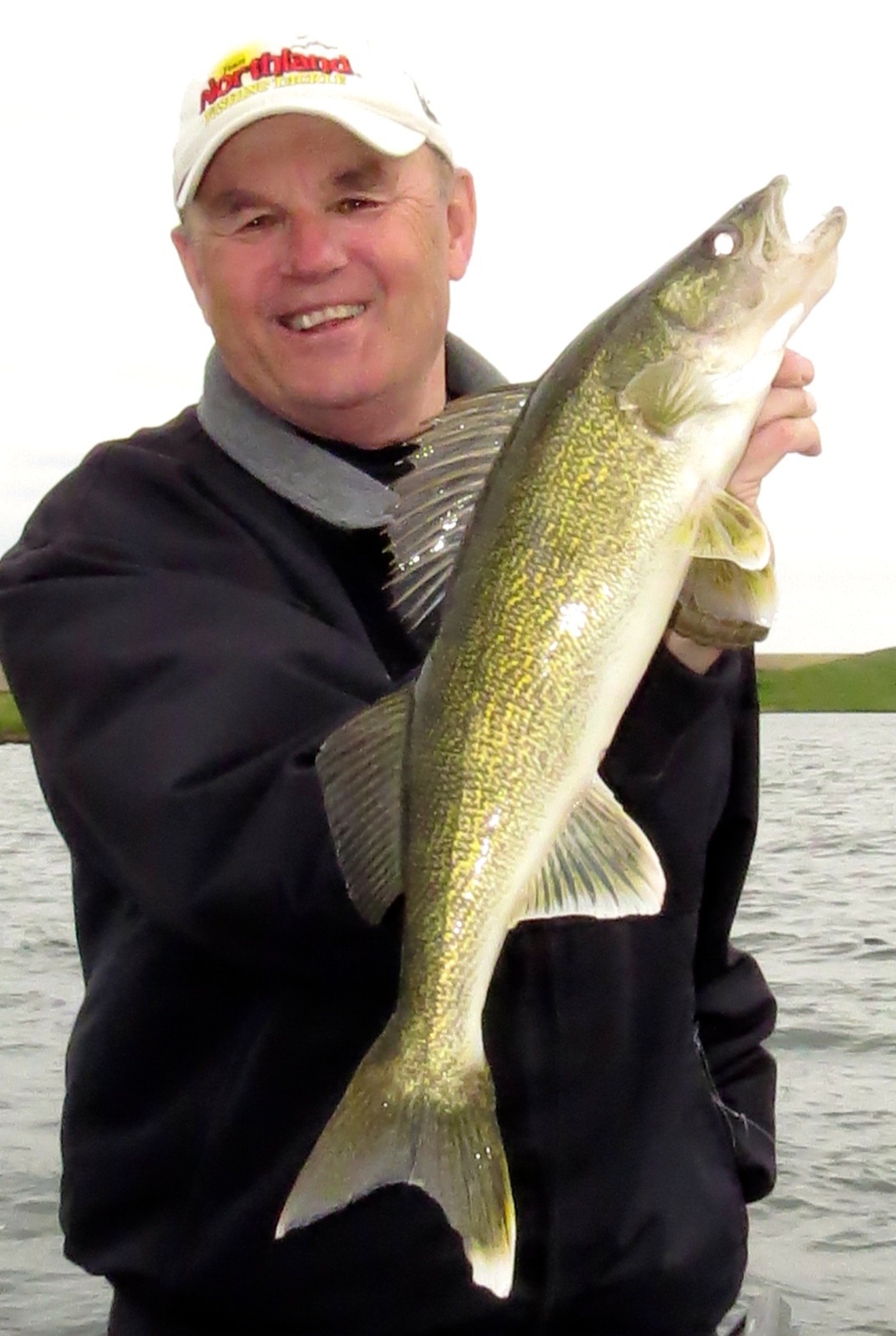 Cory, who had fished the lake several days prior to our arrival, knew where the fish were holding and with his precision casting put his lure right on top of the shallow water walleyes.

When he set the hook on the next fish, the way the rod was bending, it had to be a big fish and after a short battle, I scooped it up in the net as it came along side the boat. It was a fat 25-inch fish, a seven-pounder.

Once Larry had the light leader tied onto his line, he didn’t lose another lure and was whipping up on the walleyes, with several fish in the 18 to 20 inch range.

When the bite slowed on the windy side, we motored over to try the adjourning shorelines where vegetation protruded from the water.

Up in front of the boat, Cory was doing his best to hold us in position using the bow mount trolling motor, allowing us to fan cast into the weeds in the water along the shoreline.

His line arched across the water, splashing down between two weeds bed, raising his rod, he started reeling the bait back to the boat when he had a violent strike. Setting the hook, the big fish fought back violently, head shaking as it borrowed its way into the depths. His drag on the reel screamed as the fish pulled line and moved away from the boat. As the fish tired, Cory gained ground bringing the fish alongside the boat where I slid the net under it.

It was a big fish, twenty-seven inches fish, one I estimated to be close to seven pounds. After a few pictures Cory gently lowered the fish into the water, worked it back and forth allowing it to swim away when it was ready. With the splash of the big fish’s tail, it indicated it had enough of being out of the water, slipping from Cory’s hands and diving into the depths.

I was happy with the way our Shad Raps were doing the job, wondering what else this small lake would show us, as I let my bait rest on the water and start to rise. Two cranks of the reel later, my rod was ripped to the side as a fish engulfed my bait, started to peel line as I desperately fought to control the fish.

It made several runs, taking drag as it ran. Tightening my drag, I was gaining on the fish, bringing it towards the boat and as it rose to the surface; Cory slid the net under another large fish.

On the ruler, the fish topped out at twenty-five inches, a fish that should be in the five to six pound class.

That afternoon, our crew boated over thirty walleyes all running from eighteen to twenty-seven inches as well as eight northern pike up to eight pounds.

The numerous bodies of water around the area hold some monster fish, which are just waiting for you to catch from one of the many lakes in northeastern South Dakota. Included in the many fish swimming in these waters are thirty fish we battled with as all were released and are there for you to catch.

More information on fishing with Cory Ewing, Waubay lakes Guide Service can be found on his web site www.waubaylakeguideservice.com or you can give him a call at 605-929-3894.

← Prev: 5 Steps To Creating A New Food Plot Next: We find walleyes cooperative at Carroll Lake By Larry Myhre →