The Nebraska state record for paddlefish was once again broken this year. On October 9th, 2015 Tom Keller, Malcolm, NE. snagged the new state record fish, a 113  pound 7 oz.fish which was 50″ long. 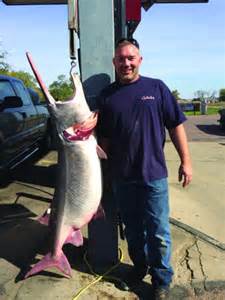 The old state record fish had a jaw tag, a South Dakota jaw tag, tag number PP4568.  That tag was put in that fish back on June 2, 1992.  The fish was tagged below Ft. Randall Dam by a fellow South Dakota pointy-headed fisheries biologist that many of us know.  Way back in 1992 he tagged that fish as part of the research he was doing for his Master’s degree.  When the fish was tagged in 1992 it was 42 inches long (fork length) and weighed 49 pounds.

In 19 years that fish grew 9.75 inches and gained 58.75 pounds!  No aging of the fish was ever done, but it was likely in its teens or early 20’s when it was initially tagged and would have been approaching 40 years old when it was caught this fall!

To me, it seems like this has been one long winter and unfortunately, there's a lot of it left! It hasn't been overly cold, but the wind has...

END_OF_DOCUMENT_TOKEN_TO_BE_REPLACED

Studying Missouri River fisheries is his job By Larry Myhre