It’s the time of the year, when temperatures are dropping and the northwest wind is making a visit to our part of the country.

I’m in the office working with my computer, hating to think that I’ll have to head outside again, when I think about all the last year, 2016, which will be ending soon.

Overall, it was a very good year, where Team members and I spent some time on the water and in the field with old friends as well as making some new ones along the way.

We started out our year in Howard, S.D. on a late season hunt where Team member Josh Anderson and I filmed a pheasant hunt, on this trip; it was easy to see why South Dakota is the “Pheasant Capital of the World”.  This trip brought back memories, reminding me of how the pheasant hunting was when I was a boy growing up in Watertown, S.D.

Back then, they had a government program, the Soil Bank program with a potion of the farm left idle. This and the method they farmed back then, created thousands of acres of habitat, which help to create excellent pheasant numbers.

Current pheasant numbers in our area are down, but I’m optimistic and looking forward to bird numbers improving. The new Conservation Reserve Program (CRP) will create thousands of acres of wildlife habitat, which gives birds a place to nest, roost, raise their chicks and help to protect the birds from predators.

Following that trip, Team member Simon Fuller and I headed to the Aberdeen-Webster area to do some ice fishing. On the trip there were some big walleyes caught and returned into the icy depths of the Glacial Lake we were fishing. On that trip, I set a record for the most fish caught; unfortunately, they were minuscule, about the length of my hand and released, allowing them to grow up. It was a great trip as it gave us the opportunity to spend time on the ice with folks cut from the same cloth we were, spending time with others who loved to spend time in the outdoors, on the ice on a cold winter day.

On our next road trip, Team member Larry Myhre and I headed up north to Williams, MN. to Lake of the Woods where Nick Painovich, Zippel Bay Resort and one of his captains took us out on one of their 30-foot charters to catch some big Lake of the Woods walleyes. It’s a beautiful area with a mammoth lake holding excellent populations of walleye, perch, pike and other species of fish. It’s a great experience, if you haven’t had the opportunity to visit northern, MN. to enjoy the LOTW experience, I’d recommend it, as it’s a great trip and Nick & Deanna at Zippel Bay will put you on the fish and treat you right. 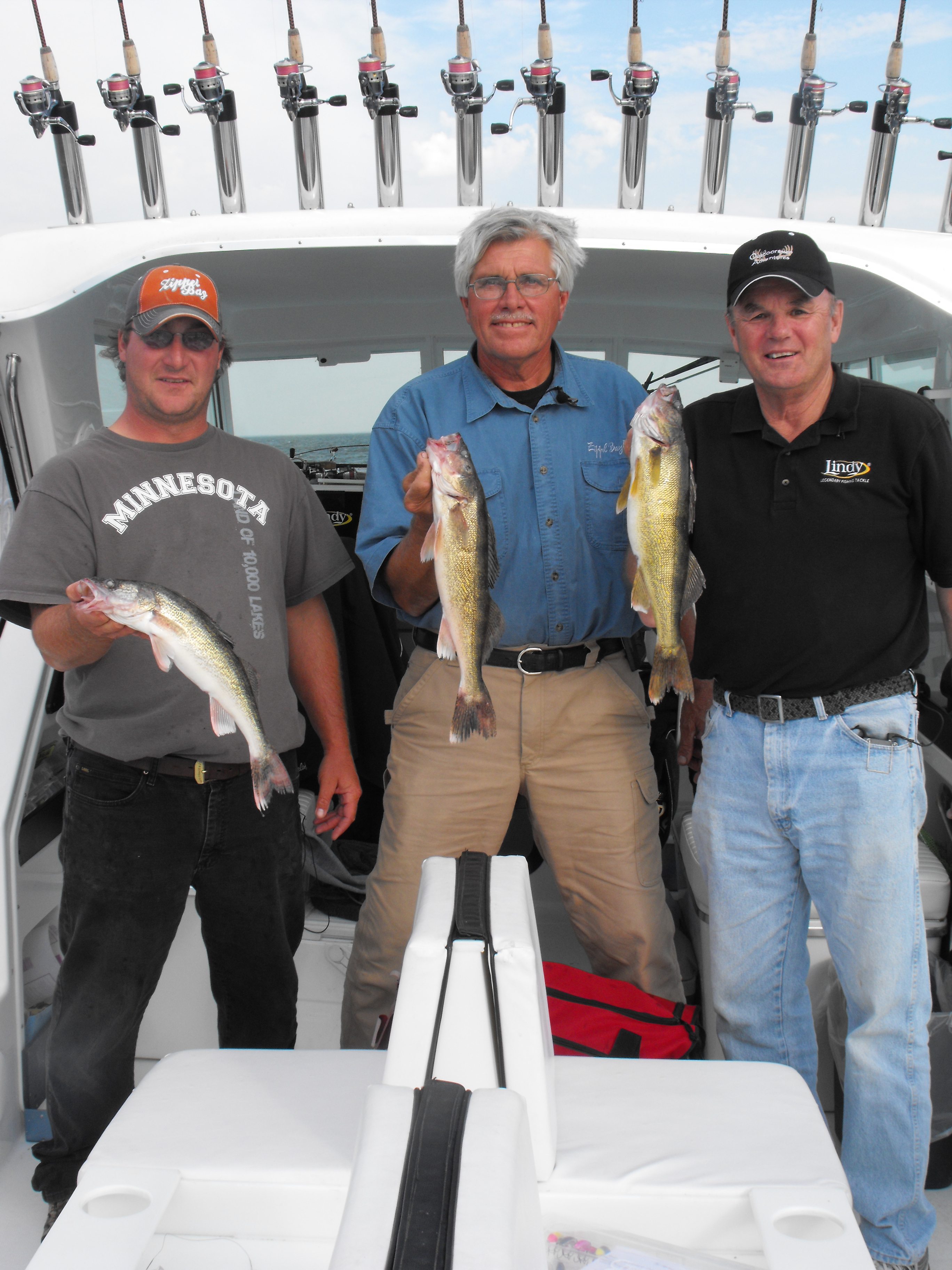 Author, Captain Nick Cole & Nick Painovich with some of the walleyes taken on Lake of the Woods on the authors’ 2016 fishing excursion.

Then it was off to Chamberlain, S.D. where I spent time on the water with a group from the North Central Chapter of the Paralyzed Veterans of America. This is an event where volunteers, take individuals, many in wheel chairs out on the water to do some fishing.  It was a monumental event, with many folks volunteering numerous hours to make the event such a success.  It included N.C.P.V.A. staff and locals who spearheaded the event, with volunteers manning the equipment loading and unloading the anglers into the boats, anglers from several states volunteering their time and boats to take people out  and a local veterans groups feeding all who attended the event, it’s groups and events like this that make me proud to be involved. This annual event is one I plan attending again next season, as it’s an event showing how caring individuals come together creating an event for those less fortunate, making it two days on the water these anglers will remember forever.

Shortly after that trip, we’d be back in the Glacial Lakes of South Dakota in the Waubay-Webster area where Team members Larry Myhre and I joined Team member Cory Ewing, Waubay Lakes Guide Service. This was a quick fishing trip on one of the numerous Glacial lakes scattered throughout N.E. South Dakota.  Numerous folks believe bodies of water have to be huge to hold big fish, on this trip, we proved that notion wrong, as we caught and released several walleyes well over 3-pounds, Proud Angler smallmouth bass and 10-pound pike.

I then rushed back to Nebraska, to go after a big gobbler, as those who read my columns know I love turkey hunting and my hope was to add another big Tom to the number of birds I’d tagged over the years in Mississippi, Missouri, Kansas, Wyoming, South Dakota, Minnesota and Iowa.

When eastern sky become highlighted with it’s beautiful shades of blue and pink,  I want to be in the woods ready for the opener of another spring turkey season. On this hunt,  team member Josh Anderson and I teamed up to tip over some Cornhusker gobblers, where we filled both Josh’s archery and shotgun tags while I worked on my three shotgun tags. Nebraska has a huge population of big Toms.

As that season ended, Larry Myhre and I went north to Gettysburg, S.D. to do some walleye and smallmouth fishing on Lake Oahe with Watertown native and good friend Chuck Krause, Krause’s Guide Service. Chuck, whose guided on the big lake for years, put us on top of a whole mess of active fish, where we spent a couple of days boating walleyes and smallmouth and enjoying the hospitality of Chuck and crew.

On our return trip, we couldn’t resist stopping in the Pierre, S.D. to spend some time on another of the South Dakota Missouri River reservoirs, fishing Lake Sharpe with good friend Kent Hutcheson, Hutch’s Guide Service.  On this trip, using jigs and livebait rigs, we had the opportunity to get into some huge Proud Angler smallmouth, as well as some nice walleyes

Later that year, I’d be closer to home, to some snagging for Paddlefish in Nebraska, as I’d been one of those who’d received the Nebraska Paddlefish tag.  I’d be on the water with Team members Marlyn Wiebelhaus, Wiebelhaus Guide Service, Wynot, NE. and Larry Myhre on the Missouri River to film a paddlefish snagging show below Gavin’s Point Dam. On this trip we brought over a dozen paddlefish into the boat, releasing several fish under the thirty-five to forty-five inch slot, before tangling with a fish that was 44 ¾” just ¼” shy of being out of the slot and then settling on another that I tagged just under the thirty-five inch slot.

Later this fall, when good Friend Mike Polak, Norfolk, NE. indicated he’d been on some good fish in the Niobrara, NE. area, it didn’t take me long to decide and I jumped at the chance to spend time on the water with he and Team member Steve Isom, Valentine, NE. As the water temperature were dropping we used Mike’s favorite methods jigging and livebait rigging to take some excellent walleye and sauger. We spent the morning and part of the afternoon on the water where they caught numerous fish between 19 to 22 inch fish. This trip-scheduled to be one of our next season shows, which will show will include some of the great fishing and highlight the Niobrara area.

Then the folks up in Estelline, S.D. invited Larry Myhre and I up to spend time in their area and to fish Lake Poinsett. We spent time on the water with Jarrod Fredricks, of South Dakota Guided Fishing where we caught some excellent fish, including almost every species of fish found in the lake.

Estelline isn’t a big city, but it and the people of Estelline are proud of their town, including their Veteran’s Memorial, which is one of the finest memorial dedicated to veterans I’ve ever had the opportunity to visit. 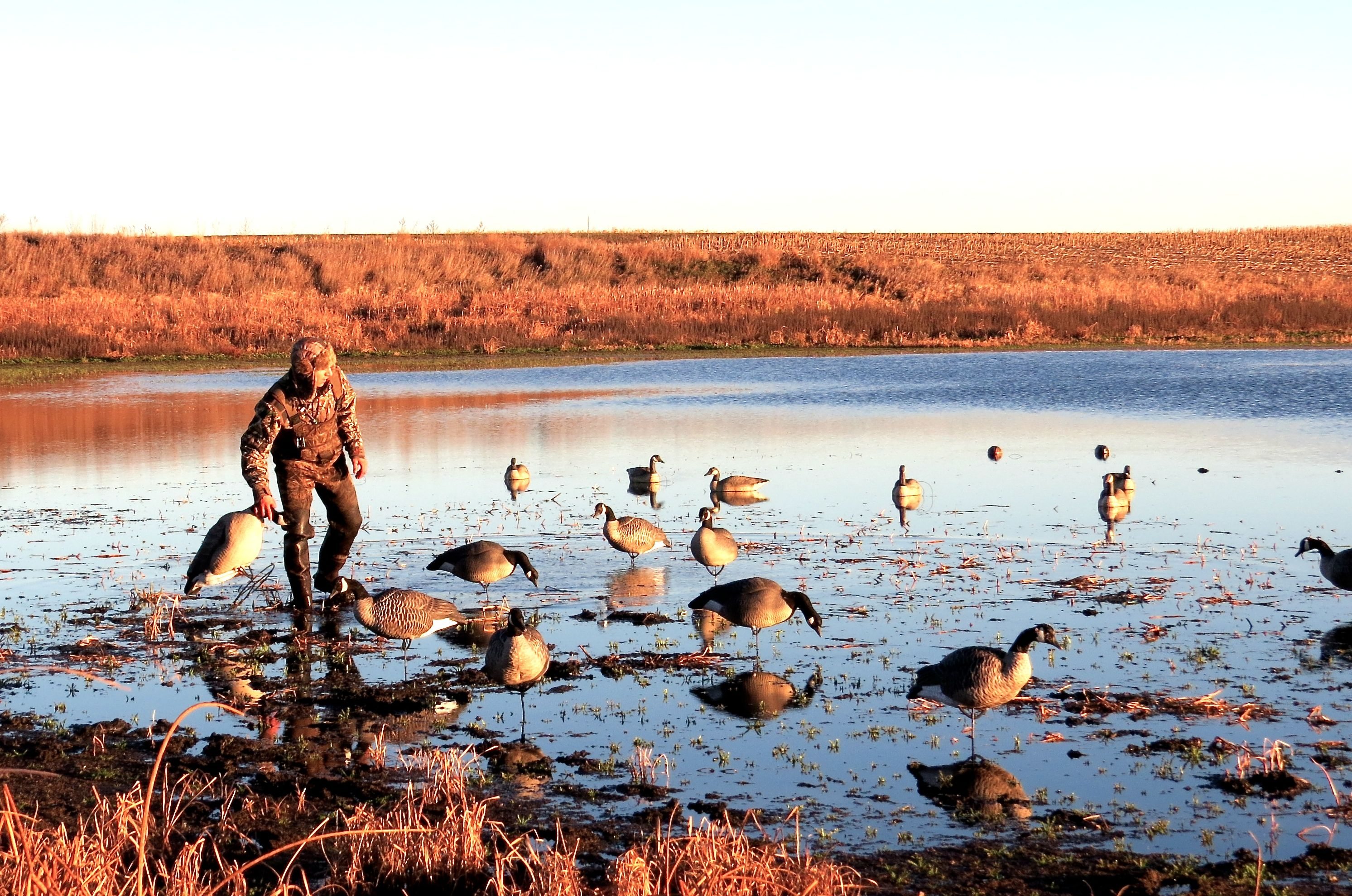 Brandon Adams, N8tive Hunting Guides moves decoys around on one of the sloughs on the Sisseton-Wahpeton Reservation.

We closed out this year with another trip where Team member Larry Myhre and Josh Anderson did our final bird hunt of the year, a waterfowl hunt with N8tive Hunting Guidez, Sisseton, S.D. on the Sisseton-Wahpeton Reservation in northeastern South Dakota. Our guides, Brandon Adams and Ray Eastmen did a great job, brought some of those educated honkers and mallards in for us. They have thousands of acres of reservation land and water available to hunt, as the reservation lies right in the middle of the Central Flyway.

It was a great year and we’re looking forward to going back on the road in 2017 as there are many great places to fish and hunt in the upper Midwest and if we had the time, we’d love to visit, unfortunately, we’ll have to pass on a few, as there just aren’t that many days in a year!

Wishing all of you all a Happy New Year and hope, you’ll have the opportunity to create some of your own Outdoorsmen Adventures in the coming year.

← Prev: That Time of the Year Being Thankful By Gary Howey Next: Catch ‘happy hour’ farm pond crappies By Larry Myhre →