GETTYSBURG, S.D. | We were early and already the Sutton Bay boat ramp was filling up with big rigs and empty trailers.

It was a beautiful morning. Sun splashed across the rugged Missouri River bluffs, throwing long shadows across the deep ravines and gullies. We had seen two deer lying in tall spring wheat on the way down from the South Whitlock Bay area, their thin necks stretching up with big ears splayed as they watched us cruise down the blacktop.

Chuck Krause fired up his big, 300-horse outboard and pointed the bow of the boat out of the bay toward the main river channel. Once there, he put the hammer down and we were flying across the calm water at 60 miles an hour.

It didn’t take long to reach the long point extending out from Willow Creek Bay. The point runs out a long ways and eventually drops into the old river channel.

“I found the walleyes here yesterday,” Chuck said. “It was fast fishing and we limited out in no time.”

But nothing brings out the fishermen like a landing net extending over the side of the boat and before Chuck left he had been joined by half a dozen boats and he learned later over a dozen were working the hotspot.

There was already one boat there when we arrived and one of the anglers had a fish on. His rod was bent nearly double and soon a big smallmouth erupted from the water in a shower of spray.

“I forgot to mention there are smallmouth here, too,” Chuck said.

Gary Howey dropped down his 2-ounce bottom bouncer pulling a 6-foot snell and a red hook sporting a piece of night crawler. It didn’t take the Hartington, Neb., angler long to connect with our first walleye.

It was a 16-incher and was promptly tossed into the live well. Fresh walleye was on our menu tonight at Chuck’s Whitlock Bay Supper Club, but we had to catch them first.

Chuck has been a full-time fishing guide in this area since the early 1980s. Both he and Gary are originally from Watertown, S.D., and knew each other as kids.

Chuck has accommodations for his fishing and hunting clients. We were staying in a recently built, 5 bedroom modular unit with an enclosed deck which overlooks the big lake and the Highway 212 bridge which crosses the reservoir at this point.

As we eased around the bar with the electric motor, we added a couple more walleyes and bass.

And the weather had changed.

After several days of howling wind, a light front had come through early that morning dropping some much-needed rain. The wind, although it pounded the fishermen hard, might have been the key to faster fishing.

But as it was we were doing well on the walleyes, and the smallmouth were providing some rod wrenching action.

The smallmouth population has come on so strong in Lake Oahe that virtually every walleye spot will hold at least a few smallmouth, too.

Smallmouth were first stocked in Oahe in 1983 and by 1989 they had reproduced so successfully that stocking efforts were stopped. Now they are the second most abundant fish caught. Walleyes are still the first.

While most anglers are releasing smallmouth, more and more are discovering that this fish is very good to eat and it is not uncommon to see limits of them hitting the tables at the fish cleaning shacks.

We headed in at about 2 o’clock. We had kept two limits of nice walleyes up to 21 inches and had put two smallmouth of the many smallmouth we caught in the box as well. 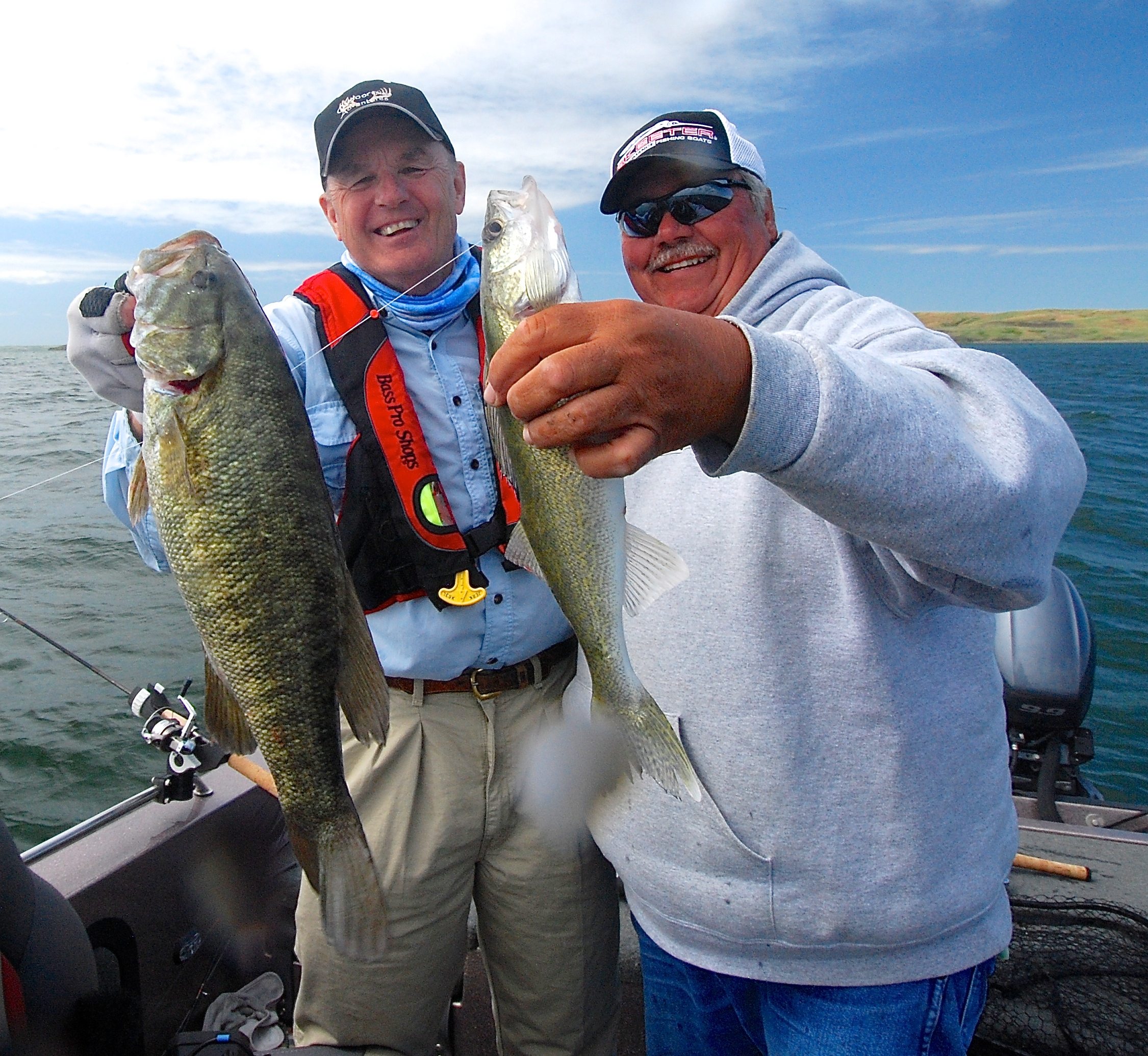 Author and guide Chuck Krause with some of the smallmouth and walleyes caught while fishing with Chuck Krause Guide Service on Lake Oahe. (Larry Myhre Photo)

The next morning we met Chuck at his supper club for breakfast.

“I think we’ll launch at the boat ramp by the bridge and just go out and play with smallmouth,” Chuck said.

That suited me just fine. Smallmouth bass are my favorite fish.

We hit a sunken island not far from the bridge and caught several smallmouth. We’d bring one in and three or four others would follow the hooked fish to the boat. That’s not uncommon when you get into schools of big smallmouth.

We could see them suspended high off the bottom on the graph. I dropped a curly-tailed grub on a quarter ounce jig about six feet down and bounced it a couple of times. A smallmouth inhaled it. That was our pattern for the next few minutes, short lining jigs among the suspended fish.

But there were other places we wanted to check out.

We motored into Stove Creek and found a sunken island that is one of Chuck’s favorite areas to fish, especially in the winter time. We were marking fish here so we put down the bottom bouncers.

There were both smallmouth and walleyes on this island and we caught several of both including two bass that would have qualified for South Dakota’s Proud Angler award.

With eight walleye in the live well, we decided to head in early again, clean the fish and then relax the rest of the afternoon before dinner.

The walleyes were deep. We fished 25 to 35 feet with most of our fish coming from 30 feet and deeper. Smallmouth were there too.

Chuck said if you like to catch smallmouth come up from mid September through October.

“They just gang up on every point,” he said. “It is phenomenal fishing.”

For more information on Chuck’s guide service for fishing and hunting as well as lodging and other accommodations, visit his website at: www.chuckkrauseguideservice.com or call him at (605) 765-9765.

Chuck Krause holds one of our walleyes we caught on Lake Oahe. We